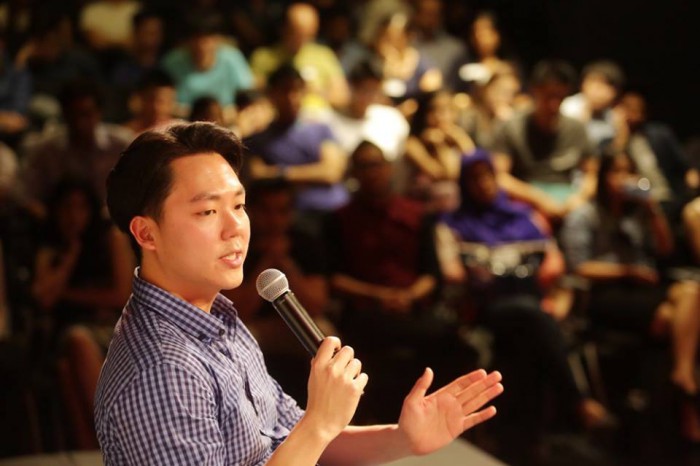 If you’re an entrepreneur, you want to fail… early and often. If you haven’t failed, it means you haven’t tried anything new.

Speaking on his new startup, KFit—for which he has already raised $3.25 million funding round led by Sequoia, on top of his previous seed funding round—Joel said that the idea came about while he was on a skiing trip in Japan.

“A friend sent me a link to ClassPass and said that it was growing faster than Uber. When I got back to KL, I called a few people,” he said, adding that this was a normal practice for him whenever he had any ideas.

“Sometimes when I shared my ideas with them, they would say that it’s not a good idea but this time, people started leaving their jobs to be a part of KFit and I thought, ‘Holy shit, things just got real’.”

As with his previous startups, the execution process for KFit was rapid; the service launched in May and already has more than 1,000 partners in 6 cities across Asia Pacific. A very bare-boned version of the app has also been released on the Android platform.

How does Joel take an idea and turn it into a success?

He fails. He fails fast enough so that he knows which part of the product needs improvement. Here are the 5 valuable points he shared.

#1 Your product doesn’t have to be perfect

“Offer customers the minimum experience. You don’t have to optimise and create the perfect experience. You might end up building something that nobody wants to use. Don’t be critical on the things that don’t matter,” he said.

According to Joel, Zalora was launched in three months. “There were only 20 people in the office when it started out. Oliver [Samwer] told them to just list anything that was fashion on Amazon and put it up on the website. Then when people buy, figure out where to get it.”

Here’s a simple gauge to check if you’re moving at the right pace: If every day (or every week) you know what you’re trying to improve, then you’re executing fast enough.

“It depends on your business model as well. A friend of mine bought a DNA-related company and he is worth five times more. He was able to succeed because he was executing so quickly in an industry that is actually very slow.”

“It’s just about embracing failure. How fast you fail is how fast you execute,” said Joel.

In KFit’s case, the execution strategy changed often, depending on what was required. “At first, we needed to get as many gyms as possible. So that’s what we did. Once we had users, some said that the gyms they wanted were not on the list, so we shifted to start filling the gaps,” he said.

“It’s a continuous iteration based on something you have to fix. There’s no right or wrong. It’s just about what you’re trying to achieve.”

There’s never a mistake too big… unless you take too long to make it right. “It’s not about what you did but how long you let it persist. Focus on fixing mistakes quicker, rather than on not making mistakes at all,” said Joel.

“For example, if you’ve hired someone who’s not suitable for the team, don’t keep that person on for the next year.

“If you know you’ve made a mistake, fix it fast.”

Also Read
This Malaysian Lecturer Quit His Job To Earn Less, But Affirms He Now Has The Best Job In The World

#4 The success of your startup rides on your team

In the beginning stages of your startup, it’s important to have a team that excels at execution.

“There are daily challenges that we must solve every single day. Think of it as using an (audio) equalizer. Everything is moving so quickly; you can’t step away from the driver’s seat,” said Joel.

To build a strong startup, founders have to have a rigorous hiring process.

“Interview 10 people to hire for one position. Interview them all within a week. That way, you have options. If you find the right person, hire him/her fast. If they’re not right for the role, fire them fast.”

When it comes to startups, having the right co-founder is as important as the idea and its execution.

“In my experience, one co-founder is enough. If it’s just you, it gets lonely. It’s good to have someone to talk to about the challenges and difficulties to continue to stay motivated. If you have more than two, there’s potential for politics,” said Joel.

“Find someone with a similar mission, but with different perspectives. Both of you have to be humble and willing to learn from each other. That way, you’ll come up with better solutions.”

Joel’s first few businesses were co-founded with Khailee Ng, who Joel met at a conference. “There’s something powerful about having co-founders who are different from each other,” he said.

“Khailee is super divergent and has many ideas. But if you don’t do anything, nothing gets done. I’m passionate about every and especially interested in converging. So we were complementary to each other and we had a similar vision; we both wanted the company to be successful,” he said.

This Startup Grind KL event featuring Joel Neoh was covered for Vulcan Post by NEXT Academy. NEXT Academy has helped many entrepreneurs, coders, marketers and designers pursue their ambitions by empowering them with the skills, knowledge and network. Find out more: www.nextacademy.co