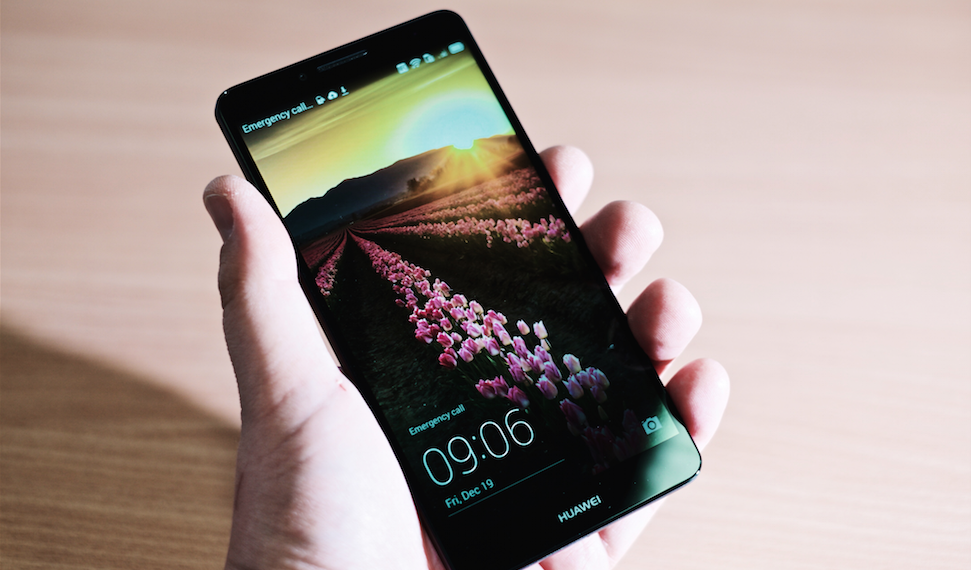 I’m not a big fan of phablets, with the exception of a few that actually justify their size as being crucial to the unit’s design. That said, I did consider the Huawei Ascend Mate 7: the six-inch screen is large enough to qualify the phone as a phablet, but not too big for my taste. I guess I just don’t like whipping out something as large as a cheese grater when making calls.

The Mate 7’s design is surprisingly pleasant. There’s a thin bezel strip at the top of the front face with all the essentials lined up: earpiece, camera (5 megapixels), and notification LED. The bottom bezel strip is thin enough to grip with the thumb and index finger, which works well considering the rest of the front face accommodates the display.

Flipping the phone, the fingerprint sensor is placed in the sweet spot. I could unlock and wake the phone from standby without much fuss. Huawei also kept the buttons to a minimum, with only the power button and volume toggles placed on the right side of the phone (the micro SIM and micro SD slots are located on the left side).

The Mate 7’s specs may not match up against flagships like Samsung’s Note 4, but it does compensate with a more affordable price tag. It can also take a serious beating, even for business purposes: the HiSilicon Kirin 925 chipset with quad-core 1.8GHz Coretex-A15 processor and a quad-core 1.3GHz Cortex-A7 processor is a heavyweight. A Mali T628 GPU also covers for the juice needed for eye candy and whatnot.

It took me a while to figure out that all that hardware needed juice to last heavy use. Though the battery life ultimately depends on the usage, the Mate 7’s battery does cover for the basic demands of the hardware, the unit’s six-inch screen included.

Huawei’s phablet is offered with 16 GB (2 GB RAM) and 32 GB (3 GB RAM). I’m sure you can resolve the difference in storage capacity with the micro SD slot — the 2 GB RAM didn’t fail under the stress test, even when I fidgeted with all the features almost at random. If you’re after more bang for the buck, then I suggest you go for the more affordable option.

The Mate 7’s specs is notably mid-range, but holds its own against the high-end competition, particularly Samsung’s Note 4. Though there’s a big drop in screen resolution (1920×1080, compared to the Samsung Note 4’s 2560×1 440), Samsung’s phablet squeezes more juice out of its battery; on the other hand, the difference in image sharpness can be ignored on the Mate 7.

The 13-megapixel rear camera may seem low-end by today’s standards, but I can think of few situations when 18-megapixel cameras made a difference. Besides, there’s more to smartphone cameras than the pixel count. My only gripe is the quality of images taken in low-light conditions, but even high-end options grapple with the handicap.

With heavy use, the Huawei Ascend Mate 7 lasts up to 12 hours — or up to two days if you barely use the juice-squeezing features. The 4100 mAh battery is a bargain if you compare its price with other phablets within (even above) its range.

The Mate 7 is hardly recommended if money isn’t an issue, but if you want the best features a mid-range phablet can offer, then you have a keeper.

This post was submitted by Tin Vergara via Vulcan Post’s submission page. She is a digital marketer from the Philippines, and blogs for PricePanda, a group of price comparison shopping sites where you can check out prices of electronic gadgets and other deals offered by online shops worldwide. When not doing DM-related work, she’s into reading e-books or finding the time to enjoy her new-found hobby (biking) and/or planning her dream trip/s (hopefully soon!). Find out more details about the Huawei Ascend Mate 7’s price here.

The RM1,899 Galaxy Watch5 Pro is certainly a jack of all trades, but is it a master of none?