YOLO! A Local Radio DJ And Entrepreneur Shares His Tactics On Dealing With Setbacks 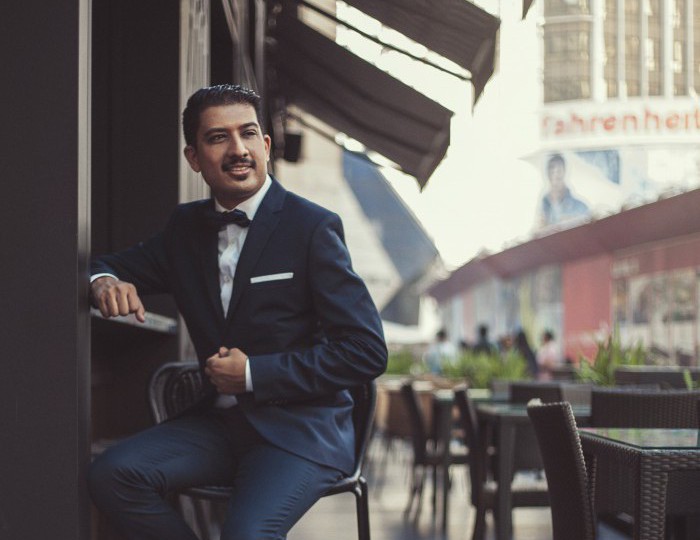 During his schooling days, the teachers had only one thing to complain about Alvin Sinclair: He talks too much. The 32-year-old radio DJ recounts how his report card would often write “Alvin talks a lot in class” or “Alvin is talking to other students and disturbing them”.

“I got that really often. But who knew that one day I would be doing a job that requires me to talk, talk and talk!”

Having worked at RTM, Fly fm and now Traxx fm, talking, hosting and presenting seem to come naturally to Alvin. But there is more to DJ-ing that just running your mouth for hours; it’s also about building connections with people through words and that is what Alvin enjoys the most.

“I love this job because I get to connect with different people, from different backgrounds with different personalities and characters! It’s amazing to meet all this new people that listens to you on air and when you meet them in person, they just go, ‘Whoaaa…so you’re the person behind the mic!’ Its fun!”

Owning A Restaurant Isn’t All That Fun

Apart from being a radio presenter, Alvin is also passionate about the F&B industry. So passionate, in fact, that he opened his own restaurant called The Balcony with a friend.

He explained to Vulcan Post that owning a restaurant is far from glamourous, requiring long hours and hard work. “I was initially attached to one of the biggest F&B groups in Malaysia for a few years. Then I decided to branch out and go on my own. Well it’s not as easy as people think, ‘Wow you own a restaurant, that’s fantastic.’ But the work that needs to be put in is crazy!”

The restaurant has since been sold but Alvin never forgot what the experience taught him. One of the things he learned is the importance of patience.

“You can’t expect to invest in something and hope for the returns tomorrow. We have to nurture it like a child, and just wait. Most importantly you need to stand out and be different, you need to have a unique selling point, giving customers a reason to come to your outlet.”

The venture also taught him an important lesson about trust. “Everybody wants to be your friend once you have a restaurant,” he said with a wink. Whatever could he mean, we wonder?

Also Read
How To Juggle A Side Business & Full-Time Job, According To A Young Beauty Entrepreneur

Having had so much experience, we asked Alvin what has he earned so far? He had two words for us; experience and knowledge.

“Money can’t buy experience. I can be in locked in a room with people from different industries and I can still strike a conversation and talk about their industries.”

We couldn’t agree more. Our interview with Alvin has showed us some wise words to say in the face of failure:

Some people might say that it’s much wiser to focus on one venture at a time. Others prefer to stick their fingers into as many pies as possible and see what happens. Alvin Sinclair sits firmly in the latter category.

“When I first started I didn’t really have a choice, focusing on one job/industry is the best thing to do. Stable income, pay your bills and repeat it all over again day in day out. But after a few years down the road, you will start to think, is this really what I like doing? Is this what I want to do for the rest of my life?”

It’s an important series of questions to ask and a scary one to answer. It’s something we all ask ourselves at every point in our career. Alvin feels that most people are comfortable with what they do which is why they are afraid to take on multiple projects at once. Exploring new territory and leaving the safety of routine can be a daunting task for most.

But not so for Alvin. He enjoys the challenge.

“I like to pursue multiple roles and see which works out best for me. If I have an interest in it, I’ll pursue it. If it does not work, no problem. What’s next? It’s always what’s next for me.”

It took 4 years of trying for Alvin to get into radio. That’s a pretty long time and it just goes to show that we should never let failure stop us from pursuing what we truly want.

“I have started a few business before and I have failed so badly that it got me into debt. But it never stopped me from trying again. My family will go like, ‘Another business? Are you serious?’ I’m like, ‘Yeah! Haha!’ Well, it’s unbelievable but I just love trying it and I don’t care how many times I fail. I always believe it’s not about how many times you fail, it’s about how many times you wake up from it and keep moving!”

One reason why Alvin is so unafraid to try as many things as possible it’s because he realises that we only have one shot at being on this earth. And once you realised that too, the fear of failure becomes a hurdle you can jump over rather than an unclimbable wall. There will always be critics and people whose words act as nothing more than a deterrent although they may have your best interest at heart. But you should never let any of these hold you back.

“To some people, they think I’m jumping around here and there, not concentrating on one job, some people even say I’m too old to be trying out new things! Well I say, you are never too old to try or give it a shot. You only live once. You don’t want to be thinking one day: I should have done this or done that. While you have the time, do it!”

You Do The Knocking

Whether it’s starting your own business, opening a restaurant or pursuing your dreams to be a radio DJ, you have to put yourself out there and work towards your goal, Alvin stressed.

“Dont wait for opportunity to come looking for you, you create it. You go and start knocking on doors. No harm asking and no harm trying! Just believe in yourself and you will eventually get there.”