The Singapore General Elections Scares Me 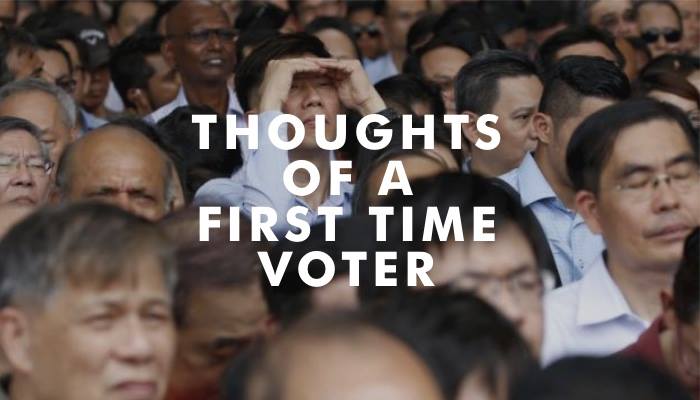 I am a 90s kid, a Singaporean, and a first-time voter. Yet it doesn’t take someone more experienced than I am to realise that there’s something unsettling about the way this year’s General Elections has taken form thus far.

An unabashed influx of general election hoo-has, political satire, and politics politics at its best has been painting my social media feeds and local tabloids. And while my adolescent voter radar would have loved to build up some sort of momentum going into Polling Day, my comparatively more mature thought processes proved a showstopper.

I’ve caught one or two other similarly clueless comrades choosing Candy Crush over intellectual debates of who should govern our country. I’ve noticed seemingly oblivious Singaporeans boldly strut the streets of Aljunied in white, attracting looks of bewilderment tethering on betrayal.

I choose to believe that these individuals are not blind to the election drama going on, but rather, actively adopting a stance of apathy this season. Because I’m sure, in the quiet of every Singaporean’s heart, whether active rally-goer or not, there is a nudging feeling of a characteristic distastefulness this General Elections.

So from enthusiastic first-time voter, I quickly spiraled into cognizant local desperate to sell her voting card off maybe on Carousell? Okay, I’m kidding. But during this period of time, I do feel rather appalled and very un-Singaporean as I take in all that is going on around me. No rally helped me make a better decision on my vote, and no poster or tagline stirred my heart.

Instead, this election season, I spent most of the time ruminating about the political environment in Singapore, and living in silent fear that this is but just a glimpse into the state of Singapore in the future.

Do I really belong to a country governed by politicians who win by putting others down?

Day after day, news of vicious animosity amongst the different parties plague the nation. It’s hard enough having someone scream into the microphone with broken English, but using broken English to break someone else?

I do not appreciate nor trust potential future leaders who flower their speeches with insinuations or insults. In the same vein, I do not vote against a person because of what they failed to do, but I vote for a person or party because of what they can do. Because when push comes to shove, we don’t dwell on why the problem came about; we figure out a solution.

Yet to date, a majority of the speeches I’ve heard and read glaze past the details of how they intend to build the country up, and instead focus on garnering support to tear their competitor(s) down.

Since when were my peers politicians too?

All of a sudden, traditionally silent Facebook peeps are particularly active on social media. It’s as if they had waited the whole year for this glorious moment to pipe in that 10-page long Facebook status detailing the rally happening right outside their door or unleashing an inner Amos Yee, vomiting our bitter disdain for the government like it’s happy hour.

On one hand, it is comforting to know that my generation has a heart for politics and a stand to make. On the other, I’m deciphering how my peers could possibly make such opinionated stands when they probably only got to truly understanding the local political landscape as a mature individual in the last 5 – 10 years.

I believe we need a comprehensive understanding of Singapore’s past governing style, the intended direction and standards set by previous leaders, and somewhat of an experience of how Singapore has grown, to be able to make informed choices and valid assessments of the current leaders. But hey, that’s just my opinion.

A house divided against itself cannot stand.

With nine parties contesting this General Elections, it means there are nine groups of Singaporeans carrying different aspirations. While we should expect a sense of normalcy to return post-GE, we are also certain that particular groups of Singaporeans will not have their version of a ‘better Singapore’ realised. And that scares me, because not obtaining what we wish for often leads to bitterness, more grouses, and an obsessive need to prove that the decision made by the majority of the population was wrong. Of course, this is all speculation. But a valid fear nonetheless. What will become of our nation after more rounds of General Elections, more spitfire candidates and more unhappy exchanges?

Some may say I’m being too melodramatic — that there is no way Singapore’s wellbeing will ever be compromised, that we live in a safe haven free of corruption, and that this General Election forges the path to achieving true freedom of speech (whatever that means).

Perhaps. But I also know and see that I am living in a country with increasingly unhappy people with varying demands, a hint of political strife, and different ideas of what’s best for Singapore.

This year is the first time since 1965 that all 89 seats in Parliament are being contested. Now if that can happen, what else can?

Editor’s Note: The opinions expressed in this article are the author’s own.