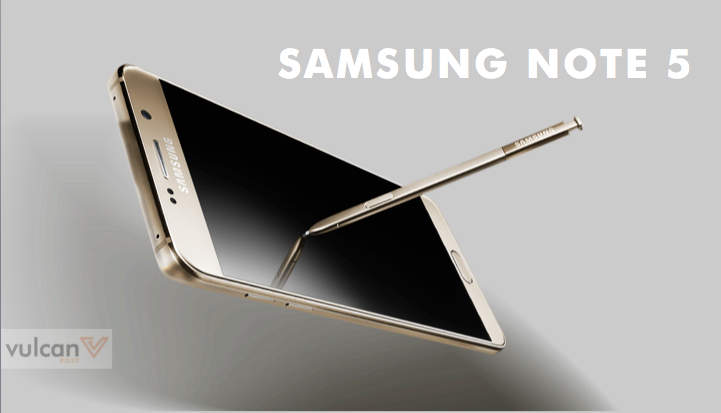 Think business phone, and the image of a Blackberry comes to mind — its easy pocket convenience, reliable mobile access to email, even the comforting clicks of its tiny QWERTY keyboard.

But businesses evolve, and over the past decade, the growth of businesses have made them more aggressive, fast-paced, and competitive. They left in their wake the squat and trusty Blackberry. In its place came a new notion of what a business phone should be: bigger, faster, more powerful — a concept introduced by Samsung, who bucked the trend and gave the world large-format smartphones.

Since the Samsung Note was launched in 2011, it has grown to become a beast of a machine, capable of all the basics the Blackberry was known for and so much more. And in the 5th iteration of the brand’s flagship business smartphone, the Note has even shed its cumbersome bulk and aesthetic, featuring instead a stylish glass and metal, ergonomically crafted chassis. But make no mistake, this is still a phone designed to offer maximum productivity and efficiency, only now, Samsung lets you do it with as much style.

Like the S6 edge+, the Note 5’s eye catching aesthetic is one of the first things that you notice about it. It has notably improved from its predecessors; its new glass and metal construction feels slimmer and sleeker in your hand, and comes with a stylus tucked at the bottom.

The trademark AMOLED 5.7-inch display shows impeccable colour accuracy on the screen. Images are sharp and crisp — whites show up bright and clear, and darks register deep and rich. Despite the screen size, Samsung has somehow managed to make the phone fit better in your hand, likely through its curved chassis that gives it a sense of ergonomic slimness — something the Note 4 sorely lacked. It’s a phablet that you can easily handle and maneuver with one hand, should you choose to do so.

Unsurprisingly, the Note 5 maintains all the best features that fans of the phablet loved about it. Currently running on Android’s latest 5.1 Lollipop, the device also packs dual CPUs designed to make the mobile’s internal operations more efficient. This means better battery life and faster multi-tasking capabilities for the Note 5.

Apps open quick and easy with no lags or delays, and are complemented by quick-access features lent by Samsung’s TouchWiz layer. This also means that the phone has access to Google’s selection of services in tandem with Samsung’s mobile business features and solutions.

The Note 5, for all intents and purposes, was designed primarily as a business phone. Every feature — including its size — was meant to make it easier for users to get things done on the go, so a run-down of its most impressive productivity features are a must:

What’s going on with the camera?

The megapixel count is already proof of how great the Note 5 camera is, but combined with its new software features and editing and shooting modes, the camera is also more usable too.

Equipped with optical stabilisation, shaky hands are not a cause for worry when you have to take pictures — it comes with Auto-HDR to keep images as true to life as possible, a tap to focus and exposure control, and the phone is packed new filters and features to tinker with.

These new features, however, are what takes it from great to amazing: the live broadcasting feature lets you stream from your phone straight onto behemoth streaming site, YouTube. There’s a 30 second delay from the time you hit record to when it gets on to YouTube, but imagine the possibilities of what this feature can do in terms of reaching a wider audience?

Given all the phone’s features, I’d say the battery life is pretty decent. With data running, constant doodling with the S Pen, a few video streams, consistent email and messaging throughout the day and music listening, the battery gives me enough to last me through the day without having to plug it into a portable charger.

For fans of the phablet, it sounds like a great smartphone because it is; and it’s hard to point out if there’s anything that I could complain about.

Price could be a deterrent, but the very reason you opt for a smartphone is because you get to save on having to purchase all other attendant gadgets that can do what it can.