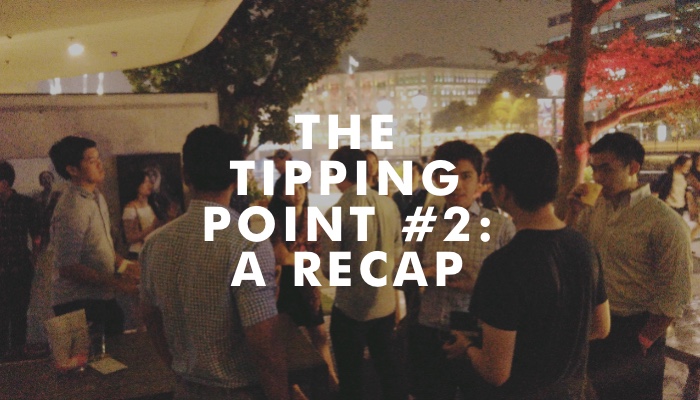 Tipping Point #2, which took place last Thursday, was a bit special. With Polling Day for the General Elections due the next day, and the PSI reading standing at 194, there were a lot of reasons to stay indoors. But despite these, some brave souls decided to venture out into the city — and stay indoors — with us.

The Tipping Point is our way of reaching out and talking to startups and readers who have been a part of Vulcan Post from the beginning. It’s a platform to share, learn, and also network for all. Think of it as a mixer and a fun sort of information session. And the setting for the night’s events: the elegant and swanky art bar, Canvas, located at the cusp of Boat Quay.

The three esteemed speakers for the night were Joash Wee from couple app Between; Dennis Tay, founder of Naiise, a platform to discover well-designed products; and Tricia Frank, Senior Marketing Manager of the popular private car service, Uber.

Joash kicked it off by taking the audiences on a trip to the beginnings of Between. Created by Seoul-based startup Value Creators & Company, Between hit over 1 million downloads in Southeast Asia alone — a testament to the growing popularity of apps for couples, and for people looking for love. The cute stickers, couple planners, and the privacy couples can enjoy proved to be winning features for the app. We can vouch for that — Between has been tried and tested by us.

The second speaker for the night, Dennis, is a strong advocate for the creative arts in Singapore. His platform Naiise began as a purely online space where tastemakers and hardcore shopaholics can discover great and well-made products from a stable of talented designers. Now, besides maintaining their online prowess, Naiise has also expanded to build on their offline presence — with three physical stores around the island.

Dennis explained how his strong belief in independent art and artists have enabled Naiise to be a successful and credible platform. “I don’t believe in discounts because they cheapen the work of the artists.” This was one of the resonating lines of the night — food for thought, anyone?

Last but not least, Uber. It has been around for a while now. Who wouldn’t subscribe to their efficient cashless system, features that allow you to split fares with your friends when travelling in packs, and of course, the comfort of being driven around town in a private car? Uber is also known for their collaborations with other startups and apps, as well as their fun campaigns, more recently the free dinners by Grain they were giving out in conjunction with the premiere of Masterchef Asia.

Despite the number of successful campaigns — we’ve enjoyed free ice cream, the freedom to play our own music from Spotify in the cars, and uberArt — Tricia shared that, “Virality is not by accident.” Definitely inspirational to young companies trying to make it big.

Learning lessons, mingling with like-minded people, and discovering the new app that you might just be addicted to next — that’s what you get from attending The Tipping Point. It’s definitely not the last one we’ll be hosting, so keep a lookout for the next one! You might even be our next star speaker.