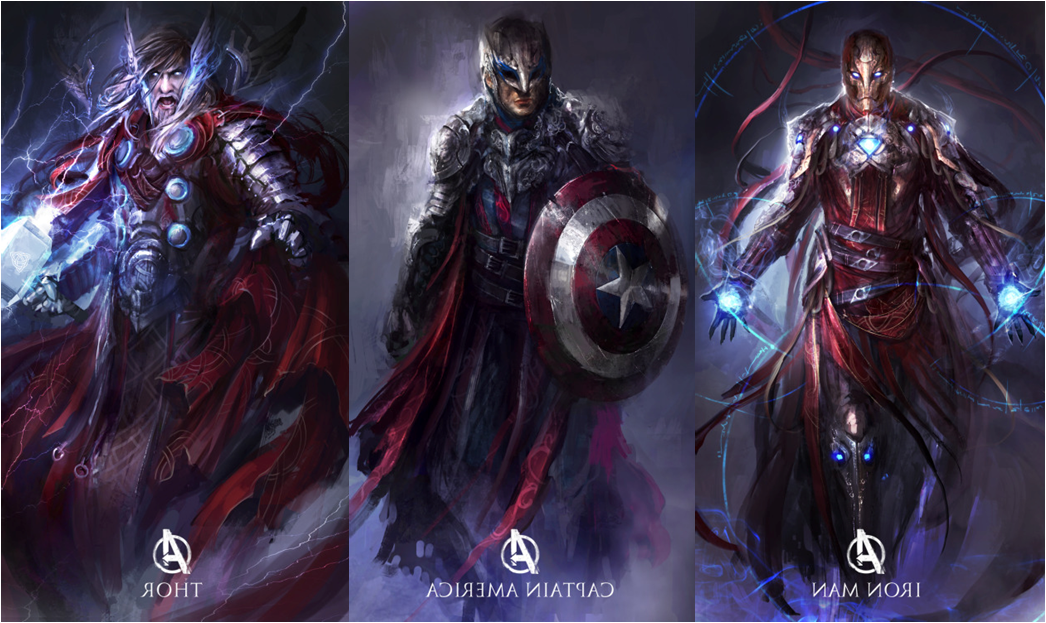 Would you believe me if I told you that Captain America and the gang have gone completely gothic, while Clint Eastwood from The Good, The Bad and The Ugly has absolutely turned into an epic knight?

How would these characters from the latest Avengers movie, Age of Ultron look like in the reminiscing of medieval and baroque periods, which convey gloomy and gothic characteristics? Would they look rather like villains than superheroes? Well, if you ask me, I’d say they look completely ravishing after being incorporated into a dark fantasy that holds a dark twist in the art.

If you have always keen to discover these fresh yet creative ideas, look nowhere else. Daniel Kamarudin, a Brunei-born artist injects these approaches into his digital art works for which most tremendous works by him are rendered and incorporated into a dark fantasy atmosphere, which without a doubt are not disappointing and look completely rad.

Noticeably, most of his works are inspired from movies, TV and video games, such as Transformers, Avengers, The Good, The Bad and The Ugly, World of Warcraft, League of Legends, and many more. In an interview with Daniel, he said he started to draw when he was about to finish his high school and he started out by drawing characters from the video games that he liked. Many of Daniel’s works can be found on Artstation, Anchoragames and also on his Tumblr.

Daniel was born and raised in Brunei until he was 17. He moved to Malaysia and joined The One Academy to study Digital Animation. He is now currently living in Brunei and he travels to Kuala Lumpur quite often. He also works as a freelance concept artist, and has over 90K views on his Artstation page.

“I went to The One Academy. It helped a bit I guess. I majored in 3d so this painting stuff I learned more on my own. Schools are more like ‘you get what you put in’ and unless you can discipline yourself REALLY well teaching yourself will not work,” said Daniel on his reply to paulSHpenguin.

Daniel mentioned that he makes arts for living and said, “I get stressed at times and might feel like I am just churning out my usual stuff but once in a while I need to remind myself that I’m having fun drawing knights and dragons for a living.”

According to blog.yourcavern, Daniel uses Photoshop CS5 and occasionally Zbrush, Keyshot and Maya for the illustration. He also mentioned that most of his works are mostly influenced by Kekai Kotaki, Stjepan Sejic, Peter Mohrbacher, Aleksi Bicrclot, Feng Zhu and Daniel Dociu.

On a Bluepulse Studio website, Daniel mentioned that World of Warcraft has definitely inspired him to draw the characters and how he loves the idea of a fully customisable character. And for each artwork, it usually takes about three to eight hours for Daniel to complete the drawing and the rendering.

When asked about competition in the industry, Daniel said, “It’s good to have competition, it makes both sides better at what they do. There’s also quite a big community of artists that do what I do in Malaysia, and to be honest, there’s quite a few of them that I look up to in fact.” He then added that there are a quite few challenges that he has to overcome like having an art-block (I suppose it’s the artist’s version of writer’s block) and balancing between his work and personal life.

On his website he mentions that he loves collecting durians (I wonder if he really means it) and I guess that’s where the name ‘theDURRRRIAN’ came from. Well, that’s definitely a good hobby to keep, after a long day of creating awesome drawings, there’s always durian to cheer him up at night.

Lastly, Daniel’s advice for any aspiring artist out there is to keep on practicing and keep yourself interested. Losing your interest and passion for this creative arts is usually what kills your growth as an artist.

His arts can be found on Redbubble and you can find many available products such as posters, photographic prints, art prints, framed prints, canvas prints, and many more. The prices range from about $10.87 to $123.50.

You can also check out Daniel’s work on his Tumblr and theDURRRRIAN.