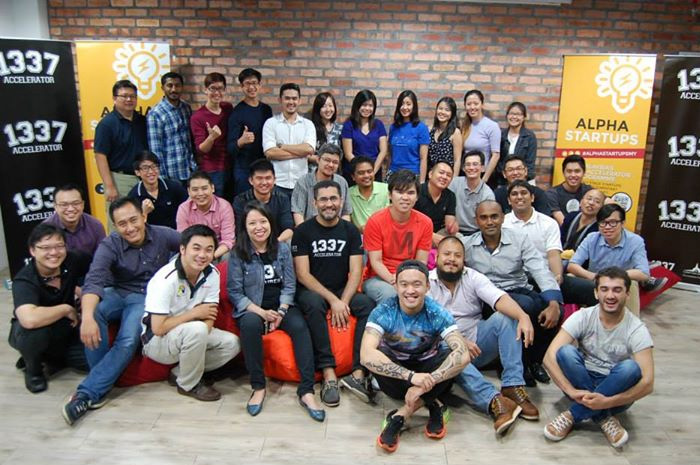 Ever had an idea that you wanted to bring to life but merely pushed aside at the thought of how­ much cost is involved in setting up a company? For aspiring entrepreneurs who desire to start something of their own but do not know where exactly to begin, a pre-accelerator programme known as the Alpha Startups, was created by 1337 Ventures with budding entrepreneurs in mind.

Having completed five intakes thus far, it is safe to say that 1337 Ventures has come a long way in providing startups an avenue to watch their dreams come to life. The 5-day intensive Alpha Startups programme takes in 25 startup teams and acts as a filter for the 1337 Accelerator programme (maximum 10 teams) which will provide each startup with a seed funding of RM50,000.

Winners of the Alpha Startups programme will receive RM10,000 and will be monitored for about another 2 months. If they continue to show progress and promise, they will receive RM50,000 and get accepted into the full accelerator programme. Alpha Startups serves to help entrepreneurs structure and validate their ideas, which is especially useful for people who don’t know the ropes of handling a business as this is a crash course for them. Unlike many comprehensive business courses, Alpha Startups is completely free, with the added possibility that the participants may get funded by 1337—if they like your style.

Alpha Startups In The Year 2015

The standout startups from 2015, as shared by Bikesh Lakhmichand, the CEO and founder of 1337 Accelerator (which is pronounced as ‘Leet’, by the way), were Gigfairy, Snapsell, CLOSETStyles, Lulu, and Eat Cake Today.

Now that the dust has settled for two of this year’s batches of Alpha Startups, Vulcan Post had a little chat with Bikesh himself to find out what were the highlights for the company this year.

Alpha Startups has been able to move away from attracting developers with ideas, to entrepreneurs with domain expertise. In fact, recent batch winners were amongst the likes of Nom Nom, a startup that allows users to discover food and promotions; and Eat Cake Today, a company that helps deliver cakes to wherever you may be in just 4 hours.

“We’ve seen Alpha Startup teams accelerate faster (raise funds) with RM10,000 than teams that received RM50,000,” Bikesh noted. That just simply goes to show that being resourceful, even with lesser funds, is important for a business to thrive.

Standing Out From The Sea Of Startups

Amongst the countless number of startups vying for a chance to obtain capital for their idea, the ones that stood out were those who were able to demonstrate what they are able to do without funding provided. “Many entrepreneurs have unvalidated ideas that sound great. They have to convince investors that there are customers out there, and that they know how to reach them,” said Bikesh.

For example, it won’t make any sense to pitch to investors by saying that there are 30 million Malaysians and 40% of them have smartphones, and that you can get only 10% of them to download your app.

“There’s a lot of traditional businesses that’s slow in coming up with online offerings and this is an advantage for startups to grab this market. In Asia the fintech space around big data, lending, remittance and payments are also big with opportunities,” said Bikesh on which startups possess good potential for growth.

The programme also provides an opportunity for Bikesh to gauge an entrepreneur’s true character and whether they have what it takes to make the startups work, since he spends an entire week for 8 hours a day with the founders. “It usually boils down to their attitude/discipline/work ethics. Teams are put through real world startup tasks in the one week and its clear who puts in the effort when they present their findings,” Bikesh elaborated.

It also helps to be fully prepared when you’re being grilled during a pitch. Bikesh highlighted 5 questions that are common—but powerful enough to convince investors that you’re deserving of funding:

1. Who is the CEO/entrepreneurs in the startup?
(Not many expect this question but a lot of the venture capitalists these days really want to know if someone with the proper business acumen is within the startup.)
2. Do you think the problem is real/big enough?
3. What is your plan to take your startup to the market?
4. What makes you the person to figure this out?
5. What happens if your biggest competitor rolls out your killer feature?

Bikesh said that the future for 1337 Accelerator is to expand into markets like Jakarta, Philippines and also to continue to build their presence in Singapore. He also wishes to start focusing on verticals like IoT and Fintech in some markets and continue an overall mobile strategy in the others. “The Alpha Startups model worked real well for us and our partners in curating startups. We want this running consistently in the 4 main countries and then potentially expand into other localities in South East Asia,” he added.

According to Bikesh, larger corporations are now beginning to use Alpha Startups as their innovation platform to seek out ideas and startups so as to be able to collaborate with them. They can also utilise it to look for entrepreneurs and ideas within their organisations. For instance, the Maybank Fintech programme was one of the examples along with the ongoing Khazanah Nasional’s Project Brainchild that is promoting entrepreneurship within their group of companies.

Why not go ahead and snag a chance to allow your ideas to be funded, as well as gain solid advice on how to manage a startup, by joining the next batch of Alpha Startups? The next programme will be held in November at Cebu, Philippines.

For more updates on the programme or on 1337 Ventures, check out their Facebook page.