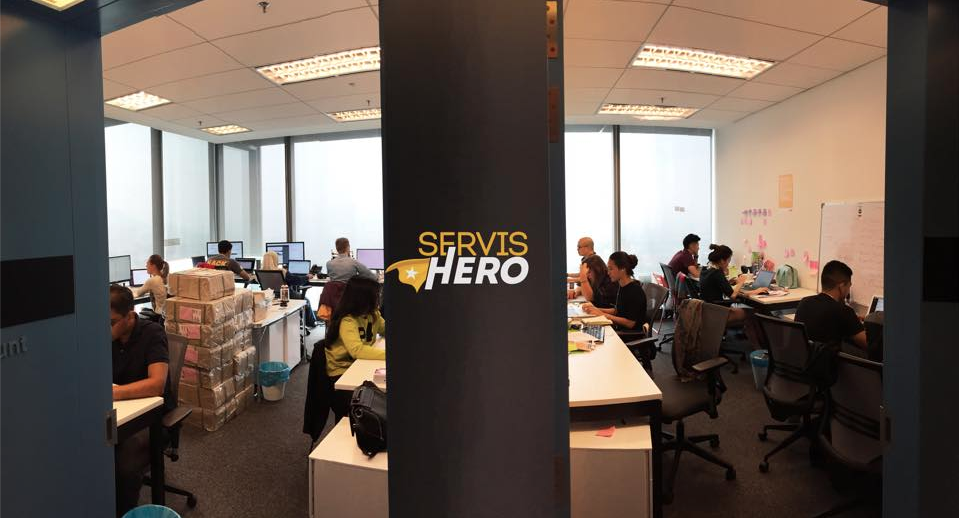 ServisHero, the “MyTeksi for Services”, is a mobile platform that connects you to local service providers such as plumbers, cleaners, personal trainers, wedding planners, and more.

They essentially help you cut down the time you spend traversing the World Wide Web or the yellow pages (if you’re old) looking for professionals every time you need stuff done.

They bring them straight to your device, and then to you.

Having raised a pre-seed amount of USD750,000, ServisHero is tackling the issue of connecting local service providers and consumers with style, finesse and panache.

Here are 10 things that you don’t know—but should—about this nimble startup.

Jason (CFO), Karl (CEO) and Sonam (Director of Content) were all students at Oxford University. In fact, both Jason (from Johor Baru) and Karl (from Klang) attended the same Entrepreneurship class and it was then, that they toyed with the idea of starting up a business back here in Malaysia.

Paul (CTO) on the other hand was visiting a classmate for a week and he was also attending a grand ball in Oxford.

They would later go on to become the founding players at ServisHero.

Karl and Nicole (Co-founder and Head of BD) previously worked on a business plan for a soup delivery business when they were neighbors in Shanghai, 6 years ago.

However, those plans were shelved when he decided to join Groupon as part of their foundation team in China.

3. “In the beginning, there was a problem”

After Karl returned to Malaysia from San Francisco early this year. He spent hours and hours looking for a reliable air-con serviceman by hunting the neighborhood trees for adverts (he didn’t really hunt them) and referrals from relatives and friends. He later spent hours trying to get the person to inspect his air-con and still ended up overpaying for the service.

Eureka! It was then that he realised that this is a problem that technology could definitely address.

4. MVP for Android and iOS in 9 weeks

The team gathered at a coffee shop on the 6th floor of the Pavilion Mall because Karl didn’t have an Internet connection back then, he does now (fortunately).

They began coding the ServisHero MVP with the Ionic Framework—a cross platform framework that lets you build hybrid mobile apps with HTML5, CSS3 and AngularJS—for both Android and iOS at the same time. This move helped them to save time and it took them just 9 weeks to complete the MVP, as opposed to taking a few months developing for Android and few months more for iOS.

Meanwhile, Nicole started interviewing tens of dozens of service providers so that they could formulate the correct series of questions to ask consumers for the service request function.

5. They scored a BBC lead engineer

One of the co-founders, Adam Burmister was also the lead engineer for the BBC.com website and he also worked as a senior engineer for Xero.com, a leading cloud accounting software.

6. How the cape came about

Courtney, their lead designer, binge watched several superhero movies over a weekend. And after watching the Dark Knight and Superman, he was greatly inspired and he drew up the iconic cape that later become part of their logo.

ServisHero launched in four cities across Malaysia and Singapore in less than a period of 6 weeks. This was an explosive start that involved a lot of travel and a lot of cold-calling prospective suppliers to join the platform.

So much so that Nicole lost her voice from all the cold-calling and she had to have a weekend of silence to recover her voice.

In the early days, ServisHero employed unusual tactics to growth hack their way to the top.

They swiped right on Tinder, found matches and they chatted them up (Perhaps they even flirted a little?), before convincing them to download their app.

They also approached over a 100 shoppers at IKEA who were staring at their phones to convince them to download their app.

9. Got to keep the abs visible!

Working for a startup is tough, stressful and time-consuming but that’s not an excuse to ignore fitness. To make sure the team keeps fit, they have a slackbot integration that randomly chooses a team member to do exercises at random intervals of the day.

At 5pm everyday, they crown a winner for the Fact Of The Day!