ZenPad C 7.0: A Stylish Budget Tablet With A Need For Speed 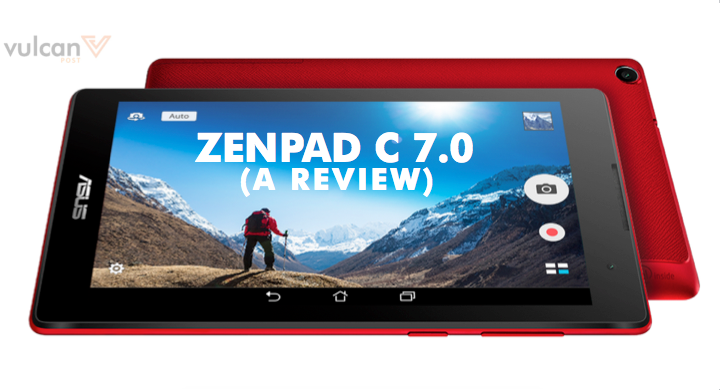 The ZenPad C 7.0 is the newest budget tablet produced by Taiwanese manufacturer ASUS. The first thing you’ll notice about it is its price; it retails for S$199, and though this isn’t the cheapest tablet on the market, I did find it to be value-for-money after trying it out for myself.

First things first, the ZenPad C 7.0 is marketed as a budget tablet, so it is important to keep your expectations in check. It’s not going to possess state-of-the-art processors, screen resolution or cameras, but for the price, it is one of the better ones out there.

Despite being made of plastic, the ZenPad C 7.0 feels really solid. The shiny finishing certainly adds to its sturdy build, and gives off a very classy feel. Like many other tablets, the lock and volume control buttons are located on the right side of this device — which is not surprising — but convenient nonetheless for users who tend to use their tablets single-handedly.

The device can be used with a SIM card in addition to MicroSD cards, which means that you will be able to use it just as you would a phone. That said, I would not suggest this: apart from being a little inconvenient, it might be little strange to see someone talking to a 7-inch tablet out on the streets.

Being used to mid- to high-end tablets and smartphones, the speed of the ZenPad C 7.0 bugged me a little at first. Simple tasks like messaging shouldn’t incur any lag times or delay, but once you begin surfing the net while attempting to multitask on the device, you can almost feel the Intel Atom x3-C3200 processor with 1GB RAM giving way. To be fair, the lags aren’t horrible — they last for only fractions of a second — but for nitpicky users like me, it can start to get on your nerves after a while.

The C 7.0 runs on the standard ASUS ZenUI, which is great, since it offers you widgets and customisable themes. It’s certainly better than the ColorOS or MIUI that most Chinese devices run on. However, it does also come with preinstalled apps that can’t seem to be deleted. This takes up not just RAM but also storage space, which is already limited with the device’s 8GB of internal storage.

Of course, this issue is easily circumvented by making use of the MicroSD slots.

I suppose the first thing you would notice when you use this device would be its screen resolution. It might be lower than what you are used to, since it only offers 1,024 x 600 resolution for a 7-inch screen. This isn’t exactly bad, but it isn’t great either. With most smartphones and tablets these days coming with full HD resolution, I did expect more from the ZenPad even as a budget tablet. So if you are intending to purchase a tablet mainly for streaming media, the ZenPad C 7.0 might not be your best bet.

Most tablets don’t possess great cameras, so the camera on the ZenPad C 7.0 — while not particularly impressive — wasn’t much of a let down. It comes with a 2-megapixel rear camera and 0.3-megapixel front camera, which is adequate for basic photo taking and video chats, but other than that, there isn’t much use for the camera on the device.

With a 3,450mAh battery, you shouldn’t have to charge the device more than once a day. The ZenUI on the system is also pretty power efficient, so battery life was never an issue for me whilst using this device.

Should you get the ZenPad C 7.0? I’d say yes, but only if you are limited by your budget. For $199, you probably won’t be able to find a tablet better than this. Of course, its low price does come at a cost too. If you are picky about lag times and want a swift and efficient tablet, you won’t be particularly pleased with this one. I’d only recommend the ZenPad C 7.0 if you are using it for basic functions such as browsing the web and for non-intensive tasks.