Can This 1 License Really Solve The War Between Regular Taxis And Private Vehicles? 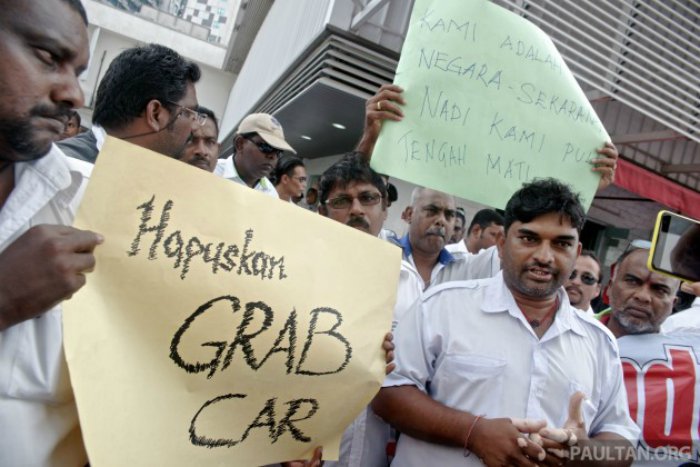 Looking to hire a private vehicle among the likes of Uber or GrabCar to ferry you to your desired location? You may need to double check if your driver owns a Public Service Vehicle (PSV) license first.

1 Uber vehicle and 8 GrabCars were amongst the recently impounded vehicles by the Land Public Transport Commission (SPAD) for several offences, inclusive of the lack of a PSV license. This follows a statement by SPAD stating that the services offered by private hire vehicles may not be seen as ‘illegal’, but should the drivers not possess a PSV license, they will be breaking the law under Section 16 of the Land Public Transport Act 2010, and this will result in their car being impounded as well.

According to a senior officer from SPAD, the way the impounding process works is that SPAD officers will go undercover and hire a private vehicle. When the driver comes round to pick the SPAD officer up, it is then that they are caught and the vehicle will be towed away. Then, the long arduous wait for court proceedings begins, before the owner can finally retrieve their vehicle again.

This episode of private unlicensed vehicles being towed away is not one that is new as it has happened before last year when 55 private vehicles were seized by SPAD. However, following a recent taxi driver protest, the impounding of the GrabCar and Uber vehicles are only causing more heartache for the drivers of these private vehicles.

The protest, which happened at the SPAD headquarters in Kelana Jaya recently, saw 50 taxi drivers standing up against the app-based transportation service. The uproar was over the fact that the rise of these “unlicensed services” were eating into the regular taxi drivers’ rice bowl.

The cabbies’ protest is not one that comes without sound reason. A representative from Badan Bertindak Pemandu Teksi Bersatu, Rosman Rahmat said that with the hike in natural gas-powered vehicles (NGV) fuel costs and GST, taxi drivers are already feeling the pain, now coupled with having to compete with private drivers too.

In their protest, the taxi drivers reasoned that when one hails an unlicensed cab from EasyTaxi and Uber, just to name a few, they are jeopardising their own personal safety as they do not know the identities of their driver.

With that being said, this is no vendetta against the ride-sharing companies who had their drivers’ vehicles being seized. Secretary of Subang Jaya Taxi Drivers’ Association (PPTSJ), Mathavan Subramaniam said that if the vehicle is operated by qualified cabbies, then it is fine to operate. However, the problem crops up when drivers who do not have a permit are still ferrying passengers around. “That’s what we are not okay with. They are taking away our income, that’s the problem,” he said.

“Every taxi driver has to undergo a health examination before being eligible for a Public Service Vehicle (PSV) licence that is required to drive a taxi,” he said. “GrabCar is not subjected to such a ruling; in addition, its vehicles are not inspected by Puspakom. This is a violation of SPAD rules, yet GrabCar is still in operation” Mathavan further added.

With all the heat surrounding this issue, a spokesperson from GrabCar said, “We do not condone such ambush operations and believe the authorities should actively discourage it. As an industry it’s important to understand that consumers want both kinds of services and it is the reason why GrabCar exists.”

Having multiple services helps to ease the barriers that exist within the industry, such as the lack of available on-demand transport options during peak period, the spokesperson added.

What this spells for the future of ride-sharing services would be more people having to obtain a PSV license before they can register with the likes of Uber to become a licensed driver. According to the Road Transport Department Malaysia’s web portal, one needs to first own a Competent Driver’s License (CDL), be at least 21 years of age, as well as have a satisfactory level of health before they can apply for a PSV license.

Although the current issue at hand is the lack of a Public Service Vehicle (PSV) license, this doesn’t solve the issue of private vehicles “eating into the regular taxi drivers’ rice bowl”. Having a license might make them more legit, but then how do regular taxi drivers plan to keep up with the competition? Perhaps that requires a more long-term solution than forcing private vehicles to get a PSV.