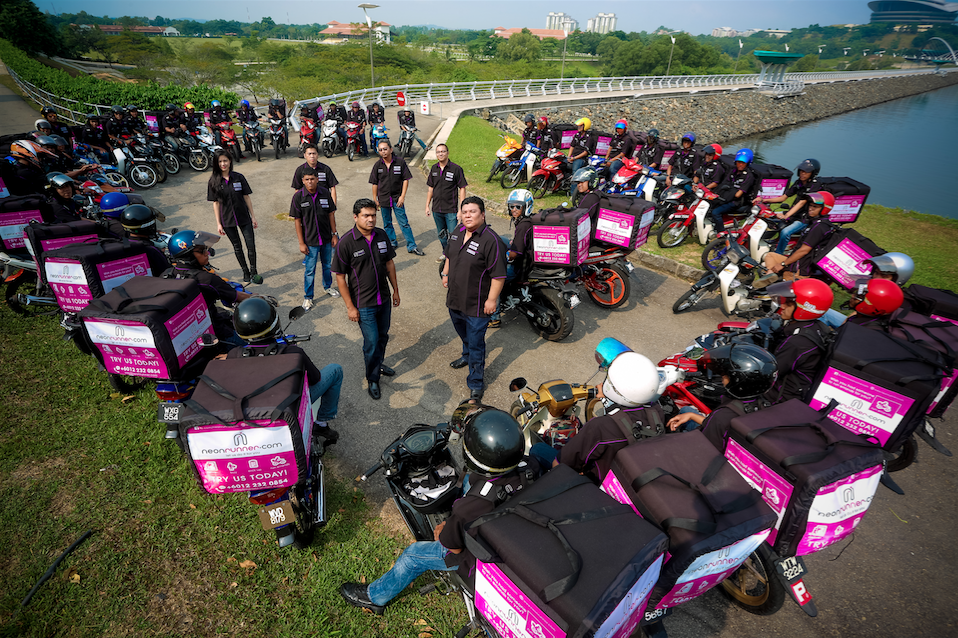 Within the past year or two, the Malaysian startup scene has given birth to plenty of on-demand services that practically get anything done for you, and get anything into your hands. And in case you were wondering, yes, you could even have condoms delivered straight to you, on-demand.

As the on-demand service industry continues to flourish, the need for runners (the foot soldiers) continues to grow accordingly. After all, it’s these runners that are held responsible for completing the tasks both effectively and efficiently.

Despite such onus, many of them continue to earn a minimum wage of RM900 a month (sometimes a little more), which honestly isn’t a lot.

While such a norm may be acceptable for the industry at large, a relatively young startup called NeonRunner feel that they can disrupt the status quo and double the minimum wage for their runners.

NeonRunner And Their Holy Grail

NeonRunner is a startup that was founded by a pair of young fathers, M. Kanashan and Arvind Patmarajah who were caught up in the whirlwind of day-to-day chores. The thought of being able to outsource such chores to a runner that could save them both time and money is what gave birth to the startup.

At its core, it’s a modern day logistics company that operates a fleet of motorcycle couriers that unlike traditional logistics firms, is able to deliver and pick-up goods all within the same day while performing tasks and errands.

NeonRunner is able to perform logistics the new way and deliver goods on the same day, a feat that’s often considered as “The Holy Grail of Logistics”.

They are able to do so because they don’t rely on the traditional “hub and spoke” model that requires firms to gather items from multiple locations, move them to a central hub, sort the goods, redistribute them and then send them out to the right recipient.

Rather, they are able to pick up goods right from the sender and deliver them straight to the recipient without wasting much time at a given hub. And their preferred use of motorcycles, only adds to the swiftness and the urgency through which they are able to deliver goods.

While that’s the gem of the idea, they soon realised that there were a lot of unaddressed needs in the market soon after they began.

Right after registering the company in September last year, they identified the potential that’s present in the B2B market.

An understandable analogy would be that of a pizzeria that’s focused on cooking up cheesy, crunchy and delicious pizzas. If they’d like to expand their operations and offer a service to deliver pizzas, it would seldom fit their business models for them to divert their attention towards maintaining bikes, managing runners and handling the other inner workings of logistics and delivery.

It’s also tough for them to remain flexible as the demand in the F&B industry tends to fluctuate, so at any given point, the pizzeria would end up with way too many runners who are idle or way too much demand that they can’t afford to meet—that’s where NeonRunner plays a key role.

They understand that in order to engage B2B customers better, they first need to build out their supply and clearly understand the needs of their customer. Since they began, they have grown their squad to 200 full-time runners that are able to match demand as it grows steadily over time.

This allows them to deploy procedures that control the quality and the safety of their service, by providing them with the necessary training, insuring them and by ensuring that they have the necessary licenses.

Having a squad of 200 full-time runners also allows them to provide the elasticity that some businesses require, especially when they need to scale quickly from 5 to 500 orders. In fact, they even deploy different models like having runners on stand-by and by also having runners on-demand to manage different business requirements as and when they arise.

The key is to always keep supply a step ahead of demand.

Power To The Runner

A key challenge that NeonRunner continues to face is to find the right people to hire. Given that they are looking to disrupt the industry and to also provide the runners great value, they place a great emphasis on training. Before they can hire individuals to join their squad of runners, the individuals go through 4 weeks of intensive training similar to a SWAT team.

Once the training is complete, only the top 5–10% are selected to stay on and they will be given the privilege to put on the NeonRunner uniform. They want the runners to feel empowered when they put on the uniform just like they would if they’d put on a UPS or Fedex uniform.

Once they’re brought on board, they can take home a salary of RM2000, provided they put in the necessary number of working hours. Both M. Kanashan and Arvind Patmarajah (co-founders) feel that this is a fair amount for a single person to live in Kuala Lumpur and they believe that this empowers them to take care of themselves and their families.

Implementing such a pricing structure doesn’t just help their runners to meet their own needs and the dire needs of their family members (be they medical or otherwise), but it also translates into better effectiveness, efficiency, and rapport that in turn helps NeonRunner perform to the best of their ability.

They believe that this approach has changed the way they run their company and in order to maintain the effectiveness of such a policy, they don’t play the price game. They believe that it doesn’t make sense to compete with companies that work out of a negative margin and squeeze out their suppliers (their runners) by paying them less than what’s really fair.

In regards to such services, Kanashan said, “Not our biggest beef, if you want to pay your runner 1000, we know you can’t sustain it. Our biggest beef is the companies that pay their guys 2000 but subsidise 1000 for a lower fee.”

Despite the competition, they believe that they should treat their runners fairly and this decision will always be reflected in their prices and in their brand.

NeonRunner’s key strength lies in their fleet of runners and in the way they treat them. Given that they are still continuing to grow their fleet, it’s not wrong to assume that they will eventually end up outgrowing every other on-demand service in terms of size.

While they’ve primarily focus on the B2B market, they are also able to cater to the consumer market. Their fundamental principle is to keep customers happy and because they have the infrastructure to meet such demand, they don’t see it fit to ignore it.

In fact, they also launched a web application and they are currently working on aggregating how customers order and once they have enough data to optimise user experience they will release their mobile app at the end of the year.

NeonRunner has provided our readers with a coupon code that will give you a discount of RM20. Use the coupon code ‘spocklives‘ to get the RM20 discount before the expiry date which is the 30th of November 2015.