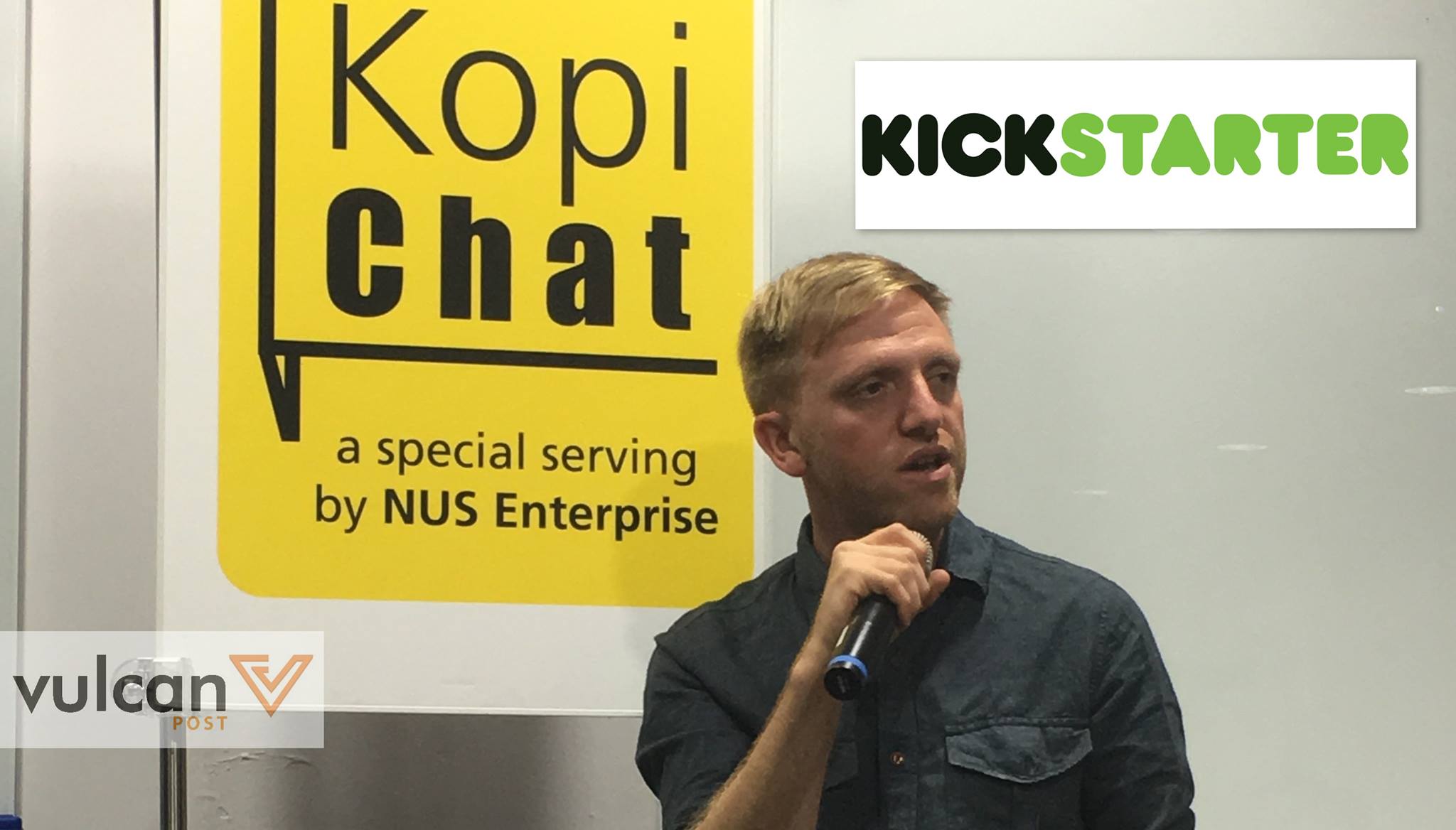 Kickstarter is a very well-known name within entrepreneurial circles. The platform, along with many other crowdfunding platforms, have been favourites amongst startups as a source of funding. So it made sense when NUS Enterprise invited the co-founder of Kickstarter, Charles Adler, to a KopiChat event last Friday.

Adler happily shared the growth story of Kickstarter and answered questions from the audience, most of whom were resident entrepreneurs in Blk 71 where the event was held. Here are 6 learning points you can gain from Adler’s talk.

While recounting the startup story of Kickstarter, Adler shared how Perry Chen first came up with the idea when a music event that he tried to organise fell through. Creatives, he realised, needed a way to fund their projects, and potential ticket holders needed to have a say in whether projects become a reality or not. Adler shared a similar passion, having had a personal project where he helped publicise works of creatives on a radio show-turned-zine.

“The moment that I was on the phone with Perry, there was this moment where — this is the thing. This is my f*cking thing. I’m the one to do this. I’ve been tinkering with this other stuff for so many years, I’ve cared about this stuff for so many years, and this idea is awesome. My wife thought I was nuts, my dog probably thought I was nuts, but I just threw myself into it.”

This common mission to help creatives make their work a reality, he shared, was what kept him and co-founders Chen and Yancy Strickler united as they built the company. It was also the driving force that helped them make a lot of critical decisions, such as the choice to make the funding all-or-nothing. Sharing that common mission, even as the company evolved, essentially made Kickstarter the platform we know today.

2. You don’t have to be first in the game

Adler shared that his team was far from being the first crowdfunding platform to launch. There were already several others in the market, including Fundable, Crowdfunder, and The Point (which eventually pivoted to become Groupon), and the team spent a lot of time looking into these potential competitors, back-engineering to understand how they worked and keeping an eye on other companies looking to join the fray.

While it would seem as though the other companies would have first-mover advantage, the Kickstarter team realised that as a platform that had yet to launch, they had the advantage. After all, it’s best to let others build the bridge, before you drive over it.

“One reflection on competition is (…) they weren’t competition till we launched — we weren’t in the game, and we should launch with our best foot forward based on the shoes that we wanted to put on.”

3. Don’t get obsessed about competition

After spending all that time worrying and analysing their potential competitors, Adler realised that being too concerned about chasing competitors may be dangerous as well. The team was in danger of analysis paralysis, and there was a danger of making decisions based on what their competitors were doing, which would have detracted them from their goal.

“We had a thesis we wanted to prove,” Adler said. “And I wanted that to have a fighting chance.”

The key, as we mentioned in point 1 above, is focus — on the goal and the product.

“I guess beyond that it’s all beyond focus. Don’t become overly obsessed about competition. You should look at them and acknowledge that they exist, but A) don’t mimic them, if not how do you differentiate yourself? and B) don’t obsess. I think that is cancerous.”

If you’ve followed Kickstarter from the beginning, you would have noticed that it hasn’t changed much in terms of design since its launch in 2009. According to Adler, who was responsible for the initial design of the platform, this boils down to the fact that they remained focused on what the company aimed to achieve, and their design has reflected that goal from day 1.

This was reflected even in their redesigns, where they focused more on giving campaigners the space to have bigger images and bigger videos, while keeping everything else simple to keep from distracting from the campaign itself. The campaign page was also designed to be as simple to create as possible, without any options to change the background or typeface, allowing people to focus on writing, making videos, and crafting rewards.

If you’re creating a product, make sure that the design and interface of the product reflects the goal of your company clearly and through any redesigns.

Whether you’re going to build a platform or a product, remember that it’s only going to get more complicated from day 1. When asked about the thinking that went behind the all-or-nothing funding principle, Adler shared that apart from it being an obvious reason (“If you don’t raise the money, then you can’t make something that you’ve promised to make”), it was also a product choice.

“This is a product thing in my head that I know over time the platform is going to get more complicated. We’re going to add features to it, we’re going to add layers to it. So let’s try to minimise the complexity [from] day 1,” said Adler.

So if you want to leave room for growth and changes in the future, remember to minimise the complexity of your flagship product right from the beginning.

6. It’s about community, not product

If you’re looking to create a Kickstarter campaign, you need to know what it’s for. It’s not a platform to sell products or just raise funds, as Adler put it. It’s also about building a community around your project, to build hype and understanding around the thing you’re trying to create.

So if you’re just looking to crowdfund, there are many other platforms you can choose from. But if you’re looking to use Kickstarter, be sure to utilise it to do what it was made for.