26-Year-Old Duo Sell Social Enterprise For Half A Million, Share The Hard Work Behind It 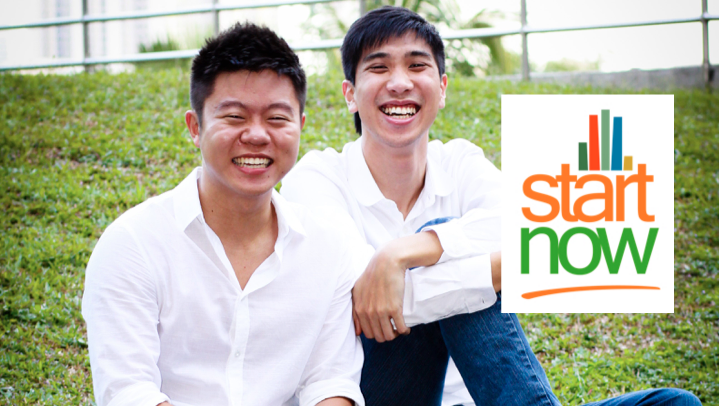 Start Now, a social enterprise and civic technology startup, has just announced that it has been acquired by Goodtizens Technologies Pte. Ltd., a spinoff company by The GoodWater Company Pte. Ltd., a local SME. The acquisition was officially completed in October 2015, and is valued at $530,000. While this pales in comparison to other acquisitions in the tech startup sector, it’s a first in the local social entrepreneurship space.

You might be unfamiliar with Start Now: it was founded in 2011 by co-founders Ivan Chang and Keith Tan, and the platform aims to connect people to good causes through technology. Originally an online platform for individuals to find volunteering opportunities, Start Now later evolved to provide a suite of management software for nonprofit and governmental organisations. These include Volunteer, Donor, Event and Pro-Bono Services Management Software, and white-label Community Engagement Platforms.

Keith said, “The journey over the past 4 years, juggling school and running our startup, was incredibly challenging. When this acquisition offer came, Ivan and myself saw the opportunity to pass the baton onto a partner that has the resources and network to take our mission further and to a larger audience.”

Social Enterprise Is Not As Rosy As It Looks

Keith shared with us that the acquisition is 70% cash and 30% shares, which means that shareholders of the company walk away with S$371,000 in cash, which they split among themselves. While this might seem to be a win for the Start Now team, things have not been as rosy as they seem for the past four years.

When the team decided to enter the social enterprise space in Singapore, the original draw was that the space was niche and that the Start Now team would be able to provide a sexy digital solution for enterprises that wanted to fulfil their corporate social responsibility.

But they were wrong.

“First of all, social enterprise is a saturated and niche market. It is super crowded. Every day some new young punk wants to change the world, and make money doing it. What they don’t realise is that the vast population isn’t that interested in doing good,” Keith shared with Vulcan Post.

“I think since we’ve started in 2011, we’ve come across at least 5 different apps trying to connect volunteers in the tiny Singapore space,” Keith added.

While the team is generating revenue, this was coming in mostly from Start Now events and campaign services, where they would work with clients to run campaigns and events for social good. To grow the events and campaign side of the business, the team needed to hire more people to service more clients, which in turn increased their monthly fixed cost.

To overcome this, Start Now had hoped that its digital offerings — which helps clients connect with volunteers through its website and mobile app — would be able to attract higher margins and generate more revenue for the company. However, clients that bought into Start Now’s digital offerings needed a lot of hands-on guidance, and it was difficult to secure new clients.

“So basically, it was hard to scale anywhere, both the events and also the digital side.”

We Are Meant For Bigger Things

As early as June 2014, it suddenly struck both Keith and Ivan that while things weren’t half bad — they were receiving contracts ranging from S$2500 to S$150,000 from time to time — they were meant for bigger things.

The duo then contemplated ways to exit this space, and in January this year, they shut down their campaign division, and laid off eight of their staff.

“We haven’t been doing much since earlier this year, and you can pretty much see us as “jobless”, and we were focusing on talking to interested buyers.”

Desperate for an exit, Keith recalled that both Ivan and himself would fly to Jakarta just for one dinner meeting with the managing partner of Goodtizen, who would later agree to acquire Start Now. The whole process took nine months from initial discussion to the final handshake.

“We flew in just for one dinner meeting — that’s the level of “desperation” that we were facing.”

With the acquisition, Goodtizens Technologies intends to integrate Start Now’s software offerings into a social change network, an innovative marketplace where social points of interest will empower people to trigger community action in smart cities globally. Goodtizens is aiming for a Beta launch in the first quarter of 2016.

Confident that Start Now is now in good hands, Keith and Ivan teased that they are working on something cool that they will reveal in the coming month. And as a word of advice to those attempting to make it big in the social enterprise space, Keith has nothing but this to say: do it if you just want to do good, don’t try and do it and think you’re going to be rich from it.

“Rich? Not going to happen.”

Also Read
PageAdvisor: The New Age Yellow Pages That Made $500K Worth Of Transactions In Under 6 Months
Categories: Luminary, Entrepreneur, Singaporean, Editor's Picks