Geeking Out With The Sam Willows: Spotify’s First Spotlight Artist In Asia 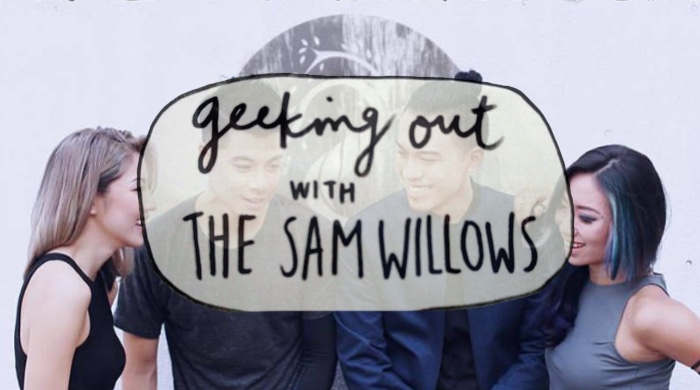 The Sam Willows are eating MOS Burger and fruits while sitting in a conference room in *SCAPE. Dressed to the nines as always, the Spotify team informs me that they’ll be zipping straight to a secret show right after the interview was done. After a massive delay from a video shoot they had to do with MTV Asia, repeating “Hi we’re The Sam Willows” followed by their names in a perky manner, the band was clearly beat.

“You write for me, I’m too lazy to write,” singer and bassist Narelle Kheng drawled to a band member as I started to talk to them about tech, gaming, mobile apps, their upcoming album Take Heart, and their newest role as Spotify’s first Spotlight artist in Asia. Spotlight is Spotify’s flagship programme that aims to identify, support and develop rising stars. Some of the most popular names in the music industry today — including Macklemore, Lorde, and Hozier — were Spotlight artists as well.

A Labour of Love

This role coincides with the release of the band’s debut album, ‘Take Heart’, which goes live today. The concept behind it, according to Narelle, is how they wanted to explore different areas in love.

“In a very realistic sense, about how it’s bittersweet, how there’s a lot of things you have to overcome in order to be with somebody or how much you have to give when you love someone else,” she said.

The album was recorded in Sweden earlier this year, but the band spent some time rolling out the singles gradually and building up their performing repertoire. Chee Meng Tan, Director of Label Relations (APAC) at Spotify also let on that The Sam Willows is probably the only band in Southeast Asia to release a piece of music and concurrently break into the Viral 50 in all the 5 markets in SEA, as well as get into the Global Viral 50 — coming in at number 48.

“Over the years, we’ve seen how they’ve grown and matured, their songwriting has improved, and I think as a band, they really have a sort of global appeal,” said Tan. “That resonates with a service like Spotify where music always travels quickly.”

Time to Geek Out!

So yes, we know The Sam Willows as a band who look good on covers, sound good on radio, and rack up the numbers when it comes to statistics — but not a lot of people know that:

1. They are pro Team Fortress 2 players.
2. Have guilty pleasure music just like all of us.
3. One of them wants to be a wizard.

So we decided to dig up more nitty geeky stuff from The Sam Willows.

Apparently, Jon Chua (vocals, lead guitar) can name you the price of any guitar in the world, Sandra Riley Tang (vocals, percussion) wants to be a wizard, and Benjamin Kheng (vocals, guitar) was unashamed about his penchant for musical tunes. Ah, the knowledge I have gained.

Being diplomatic, the band also agreed in unison that Spotify was a daily app they utilised — while making eye contact with the Spotify representatives present in the room. The Spotify team looked mighty pleased to hear this, and we move along with some smiling and head nodding (Well played, Sam Willows!).

We definitely hope to see this apps coming put in 2016. Or the year after, or the century after.

Fun fact: Those in Singapore music scene are a bunch of gamerhead LAN shop patrons — and it’s really not a bad thing. “If it was down to two teams for a Team Fortress 2 tournament, it would be us vs Stopgap, ” Narelle says. Anyone want to give Spotify’s Spotlight Artist of Asia a go?

At this question, console-gamer Jon immediately perked up and said he wanted a Singapore version of Grand Theft Auto. I agree: It would be interesting, I guess, to see a side of Singapore we can never see IRL — violence, strip clubs, randomly punching people but set around neighbourhoods like Yew Tee and Hougang and our iconic expressways.

“Aw man Limp Bizkit’s band is solid!” Ben tells me. In my head, ‘Rollin’ plays as I try to minus Fred Durst’s voice. It was really hard.

Spotify’s Discover Weekly is creepily accurate and whoever created the algorithm for it deserves a medal, so it is no surprise to see it being listed. ‘Women of Soul’ is a one of Spotify’s curated playlists available which Ben really enjoys. Musicals, Limp Bizkit, and Soul — a peculiar mix indeed.