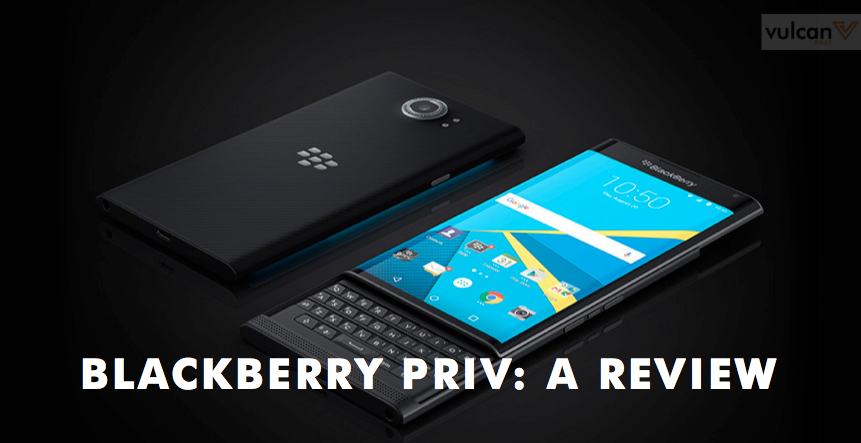 The BlackBerry Priv is finally out, and it’s being touted as the BlackBerry handset that’s set to give the floundering brand relevance in today’s smartphone market.

The USD 699 Priv is a decent addition to the sea of Android devices, with a few unique additions to its hardware — specifically, a physical keyboard — on top of it now being able to carry out run-of-the-mill Android functions.

But is it too little too late? Let’s take a look.

The Priv’s tactile keyboard is the most BlackBerry thing about this particular handset. A massive screen slides up, revealing a physical keyboard that delivers the satisfying clicks that people knew and loved so well from the BlackBerrys of years past. But the company — perhaps in recognition of the fact that candybar smartphones have virtually rendered the tactile keyboard obsolete — made it so that coming back to this old concept was something to be missed. The phone is engineered to be perfectly balanced, even after the screen slides up. Even when closed, the device doesn’t feel heavy or thick.

In terms of software, BlackBerry made it a point to maximise the existence of a real keyboard with shortcuts. This is delivered by long-press commands that trigger quick app launch. They’ve also incorporated touch sensitivity that allows users to scroll and select.

With a 5.4-inch curved AMOLED display and 2560 x 1440 resolution, the Priv offers a screen that’s big enough to provide an immersive multimedia experience, but without adding additional bulk that makes it off-putting. Images register crisp and clear, sharp and rich — but it’s nothing stellar compared to what other candybar smartphones today can already do.

This Blackberry runs on Android Lollipop — the most drastic change, considering BlackBerry was once the leader in smartphone technology with its proprietary software. Thankfully, despite adopting the Android UX, they’ve left the device to stand by itself with no skins or bloatware to bog it down. The Priv runs on a Qualcomm Snapdragon 808, Hexa-Core processor and packs a 3GB low-power RAM, which, for the most part, makes the phone function well — but not well enough to make it stand out from competition.

The 18MP rear camera easily makes the Priv the Blackberry with the best camera ever. And on paper it holds up — the impressive megapixel count is a Schneider-Kreuznach certified imaging sensor. But in reality, the Priv is not designed to replace a DSLR. It’s designed to take sharp images that you can upload on Facebook and Instagram.

Add to that a disappointing 2MP front camera, and you have a perfectly ordinary snapper in your hands. Not that BlackBerry users will likely be spending too much time snapping selfies with the Priv, but the option to be able to do so would’ve been great.

As far as smartphone batteries go, 3,410 mAh is a monster. It’s meant to promise users a full day of battery use, but noticeably, the Priv seems to run through its juice a lot faster than most smartphones. Where checking emails over breakfast (roughly around half an hour of consistent use) will drain an iPhone 6 or a Samsung edge+ anywhere from 5% to 10% of its battery, the Priv will eat up a huge 15% to 20%. The phone will barely last you through the day. And strictly speaking, it only will if you begin your days at 9am and end it promptly by 8 in the evening.

It’s OK. The Priv basically does what you expect of an Android smartphone — nothing more, nothing less. Perhaps its design, particularly the tactile keyboard, might be enough to draw in curious early adopters who ironically are nostalgic for the physical hardware. But it’s hardly the ideal fusion of BlackBerry and Android that most fans hoped it would be.

It’s a good start though. Bear in mind that this is only BlackBerry’s first foray into Android territory. And all things considered, they didn’t do so bad…so here’s hoping that ‘OK’ is enough to get the steam rolling once again for the brand and that they can properly execute on the great ideas they had for this one.