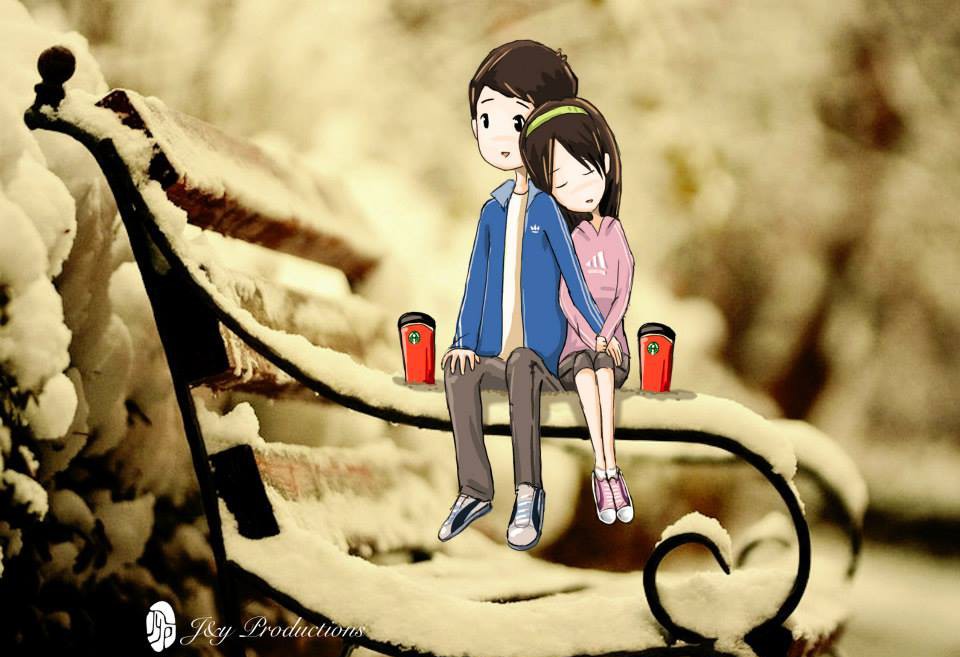 It all started out as a beautiful thing that the lovebirds shared which nobody else had. Wai Mei (YMei) was an emotional girl with an affinity towards cute things. Jason Lim, the boy who was courting her knew this, and in order to capture her heart, he began drawing cute pieces just so he could hear the sound of her laughter.

Unbeknownst to the two, their love would soon be on display for more than 17,000 people to see, for the drawings grew from a love gift, to a side career. You see, as their relationship blossomed, so did an interest in sharing the cute images to the world.

Hence in April of 2013, J&Y Productions’ Facebook page was born and finally, the caricature depiction of the couple with a comical twist to it, could be enjoyed among netizens.

Drawing Something Out Of Nothing

J&Y Productions was just a hobby in the beginning, as Jason already has his day job as a qualified engineer. In fact when they first started out, Jason would only draw on papers, scan the images and publish them online—a tedious process made worse by the bad lighting, crumpled paper and stains.

However, his talent was noticed by a slew of big brands such as Naza, and when opportunities came knocking on the couple’s front door, Jason decided to become a part-time designer and artist as well. Seeing as he was a freelance designer back in his university days taking up design jobs from SMEs, it was easier for Jason to find opportunities which will produce a side income for him and his girlfriend.

“I managed to build a list of clienteles from then on, until today where I can leverage my characters with the big brands,” Jason shared. Therefore, the connections Jason had enabled the couple to grow J&Y Productions.

Drawing In A Huge Success

The couple’s little project for the past 2 and a half years have not been in vain, for they were recently nominated in the Digi WWWOW awards under the Independent Publisher category. “This is a great motivation for me to continue creating better art, designs and comics to bring love and happiness to everyone,” said Jason.

Not only that, the couple were also invited to exhibit and talk at the Hotlink Ohhsome Fest last year, on top of having their drawings featured in sites like SGAG. The reason the comic is such a hit among the public is due to the fact that it revolves around relatable and local topics such as ‘bantal busuk’ (smelly pillow) and #shortgirlproblems.

“80% of the stories are based on real life, but most of them are exaggerated to give the story a sense of humor, which can help to convey a message more effectively,” said Jason, adding that he does not usually sweet talk his girlfriend, as he is not good with words.

Therefore, he expresses himself freely through his art and draws inspiration from just about everything. “We get ideas from little things, like biting the tip of a straw, chewing ice cubes, and rolling the batteries when the remote control is not responding.”

Another source for their ideas comes from the couples’ interaction between each other—as that is after all how J&Y Productions came to be. “We got to be observant enough to track every possible thing that can be translated into the form of a comic,” said Jason.

Drawing Up A Better Future

To be able to do what he loves and generate some income out of it was just like a dream come true. “We were endorsed and commissioned through collaboration with big brands, such as Naza, Morelli’s Gelato, Pran Juice, General Electric, USM, and more, and we were also invited to draw a mural painting for a restaurant in Pavilion.”

With that, the couple are leveraging on how well they are doing by preparing to launch their first comic book. Jason hopes this could be a source of funding for any of their future projects, and even possibly a startup.

Jason ends on a positive note as he hopes that they are able to reach out to more people, for instance by translating their comics into different languages. “I believe we can spread more love and happiness the Malaysian way to people around the world,” he added—a noble effort from a pair of lovebirds.

You can check out more of their cute comics here.