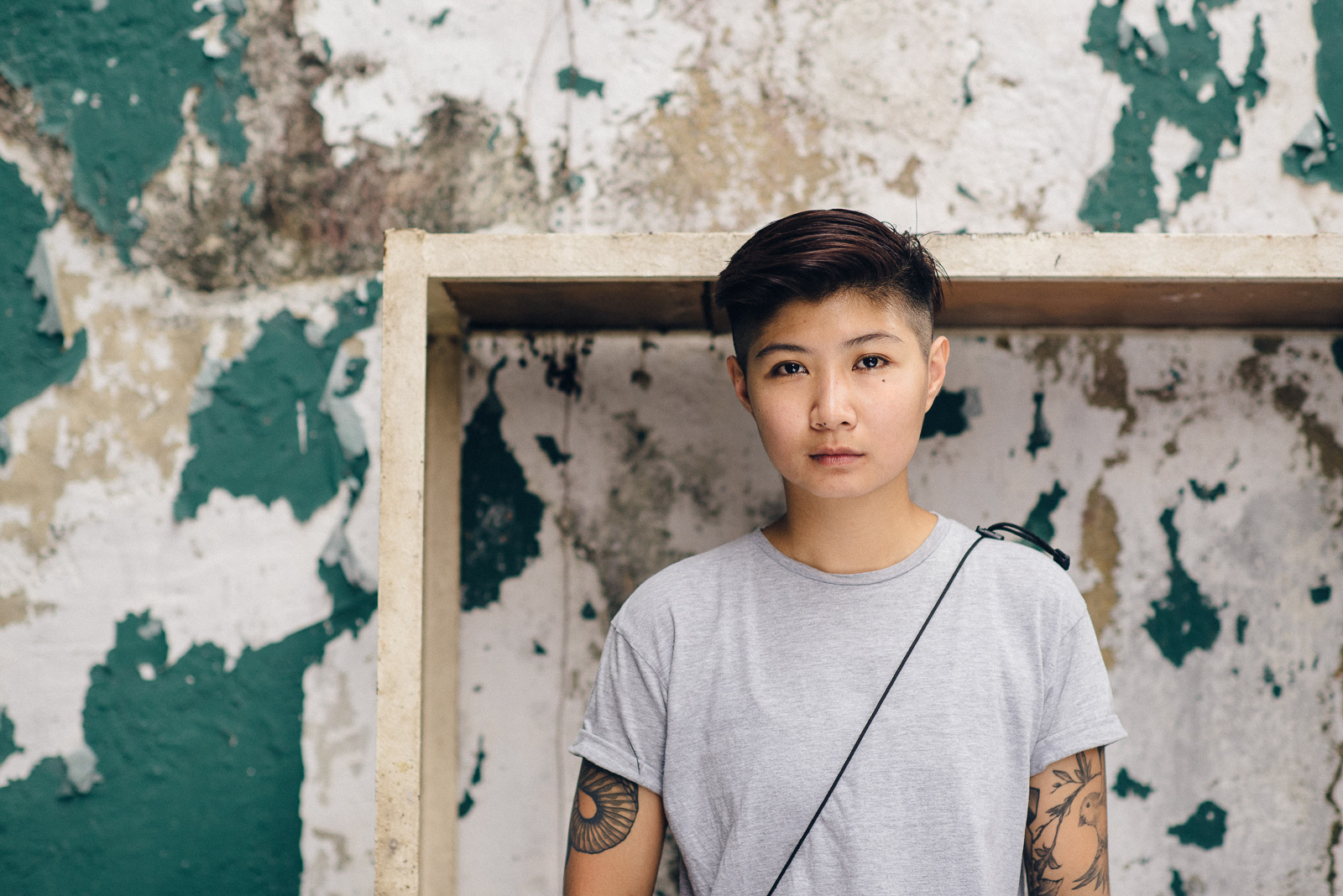 Many of us know her as Sticker Lady. She gained Singaporeans’ attention a few years ago when her works — remember “My Grandfather Road” and “Press Until Shiok”? — made their rounds online and got her arrested for vandalism. But Samantha Lo, or SKL0, as she’s known these days, has since moved on and is now a fully-fledged urban artist who held her first solo exhibition earlier this year.

We speak to her to find out more about her craft and background.

Tell us about your background. How did you get into the urban art scene?

I didn’t have much of an art or design background; I’m a self-taught artist. In 2009, I started an online magazine called RCGNTN (pronounced as ‘recognition’), which served as a platform to promote local artists. It forced me into learning design, because I had to create the website and collaterals. I started talking to creatives from the street scene, and really got into their culture — stuff like street art and sneakers. Dabbling in street art came later, in 2011.

During the whole sticker episode, I was still working mainly on the computer. It was only after I got arrested that I opened myself up to a whole new world. I was struggling with what it meant to be an artist, and thought it was a good time to explore different ways of expressing myself. That was when I started working with watercolours, sculptures, and other forms of art.

Was creativity a big part of your childhood?

Yeah, definitely. For instance, I loved drawing cartoons that I saw on TV. I never fully immersed myself into the arts though — it’s not something that parents in Singapore would be agreeable with. I ended up studying Food Science and Nutrition for my diploma, and Business Management for my degree.

What is it like to be an artist in Singapore?

It’s hard to be completely honest with yourself as an artist. You always have to turn to commercial work to make money, doing things like graphic design, illustrations and murals. It’s difficult to create original work for solo or group exhibitions.

When I was invited to work with Sentosa, there were comments that I was selling out. I didn’t think so, because I was still making fun of people. I wasn’t changing my principles. It’s tricky to find a balance between feeding your soul and feeding your family.

I haven’t really been looking out for commercial assignments, because I want to focus on my practice. It’s risky in the sense that I might lose contacts in the industry, but it’s just something I have to deal with.

What was the hardest thing you had to overcome?

My short attention span. I tend to jump between different media and concepts, and it can be frustrating sometimes. I’d think that I found something I wanted to do, only to realise later on that it wasn’t right for me.

It’s a journey of self-discovery?

Absolutely, it’s a great journey. It helps to solidify my concepts and develop my mindset. At this point in time, I’m looking for a concept that is more meditative. That’s where Indigoism comes in — it’s a project about finding our collective consciousness. I’ll be doing interviews with people having different beliefs, to investigate our common thread and make sense of this thing called life. It’s still very much in its infancy, and I’ve no idea what I’m going to end up with. But that’s fine, because the whole process is the artwork.

We’re kicking off with a social experiment called The Barter Market, to explore what happens when money is taken out of transactions. It’s an event where vendors offer their goods, in exchange for other goods or services.

How do you approach your work?

I always start off with an observation, which leads to research, like surveys and feedback from conversations. Research plays a big part in my work, because I need to know the purpose behind my projects. I can’t conjure something out of thin air — I’ve tried that approach, but I could never feel 100 percent about projects that start that way.

To me, the impact that art can make is really important. I’m blown away by work with good aesthetics, for sure — but the message behind the art is just as important as the aesthetics.

How do you see your work evolving in the future?

I’m not tackling socio-political issues as much as before. I need a break from that, because I think that there are bigger issues to explore. It’s about looking inwards, at our souls. By examining ourselves at a fundamental level, we can make sense of what’s happening at a more superficial level.

The way we’re living now, it’s just about satisfying our senses. You keep hearing about how Singapore is a soulless city. I get why people are saying that, but I do think we have souls. We’re just pushing that aside in the pursuit of other things. I want to figure that out.

If you could go back in time and do one thing differently, what would it be?

What are your dreams for the future?

I’d love to see a more compassionate and open society. As for me, I just want to grow into someone who is a little more at peace with myself.

What advice would you give to someone starting out as an artist?

Finding your voice is always the first challenge. Take it easy. Life will look brighter, and you will find your purpose in what you’re doing. It’s fine to try out different things, but just give it a chance. And if it’s not working out, move on — that’s perfectly okay. Stop trying to race against time.

Tell us something most people don’t know about you.

I used to be a laboratory technician. When you have a diploma in food science and you’re in a hurry to find a job, that happens.

Philosophy you live by:

Live in the now. Know why you’re creating, and take your time.

This article was first published on Create to Inspire, a digital magazine by Ubersnap that features interviews about creativity and courage, with the best creators in Singapore. The original post can be read here.

Also Read
Behind The Lens Of One Of Singapore’s Most Followed Street Photographers, Aik Beng Chia