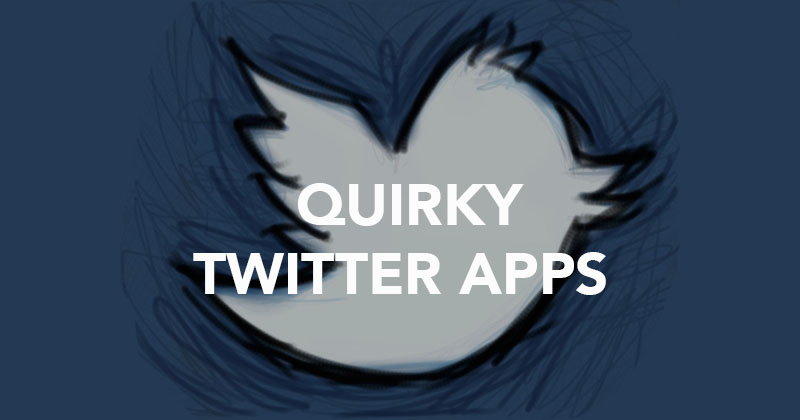 The Twitterverse is often chaotic, sometimes scary, and unapologetically strange. With an average of 5700 tweets sent out every second, the platform is a treasure trove of information about people’s everyday habits and how they interact. Seizing the opportunity, the creative ones among us have built some quirky apps that tap on this data to bring us information we never knew could be interesting. Here are five ways to explore Twitter with these apps.

1. Keep track of your friends’ bios with bioischanged.com

Created by students Jack Hage and Pieter Meije from the Netherlands, Bio Is Changed is a simple tool that sends you an email notification when a Twitter friend changes their personal description. This app may seem unnecessarily specific, but it can sometimes reveal interesting circumstances behind a change in bio.

For example, tech site Re/Code used Bio Is Changed to get first-hand information that Twitter’s then-sales chief Adam Bain had tweaked his job description. Similarly, The Guardian used the app to uncover that a former head of New Media and Technology at the BBC had removed a key detail from his bio. Whether you’re hoping to keep track of job shifts in the corporate world, or just want to be in the loop about your friends’ progress in life, Bio Is Changed can be immensely useful.

You may not have realised, but the times at which you tweet are actually indicative of your sleep patterns. For instance, Twitter engineers have used time stamps to deduce that users in Istanbul, Turkey, don’t sleep much in August — which has been found to be true. Tech blogger Amit Agarwal used the same concept to build Sleeping Time, a site that analyses up to 1000 of a person’s most recent tweets to guess their sleep schedule.

3. Unleash your inner poet with Poetweet

Need a poem to impress someone? Just type in their twitter handle, and Poetweet will craft a personalised poem for them, based on their 140-character musings. You can choose between a sonnet, rondel and indriso, and Poetweet will churn out some deep verses for you within a minute.

Poetweet’s creators explained that the app strings the verses together by looking for rhythms among the tweets, with results that are “curious…and sometimes surreal”. While the lines may not always read smoothly, they do allow for some introspection on the words and tone of voice you use on Twitter. And of course, it’s always fun to try it out on the Twitter accounts of celebrities and politicians. Check out other fascinating results from Poetweet in a post we did earlier.

4. Find out who burned bridges, using Friend or Follow

If someone unfollowed you on Twitter recently, perhaps it’s time to return the favour. Friend or Follow is a nifty tool that divides your Twitter contacts into four neat categories: Fans, Friends, Unfollowers and Followers. The Fans tab shows you the people who have followed you but you haven’t followed back — so you can take some time to consider linking up with them. But perhaps what you’re more concerned with is the Unfollowers tab, which shows you the people who decided to stop hearing from you.

Friend or Follow is one of many sites that lets you keep track of changes in your follower base, and in my opinion, one of the more user-friendly ones. This site can also be used with your Tumblr and Instagram accounts, so it gets pretty comprehensive.

5. At the end of it all, take a stroll down Twitter memory lane

Twitter introduced a search function this year, but if you’re looking for potentially deleted tweets or seeking to uncover trends, third party apps might still be your best bet. Topsy is one popular tool for scraping old tweets out of the Twitterverse. The site also provides intriguing numbers, such as the general mood of the tweets, and trends in the words used.

Other apps, such as Tweet Tunnel and TwimeMachine, provide quick ways to generate simple lists of a user’s earliest tweets. Or if all you want is to just view your first tweet, Twitter itself can fulfil your request with its My First Tweet function.