Why Is Everyone Freaking Out Over LTA’s Bad Photoshop Job? 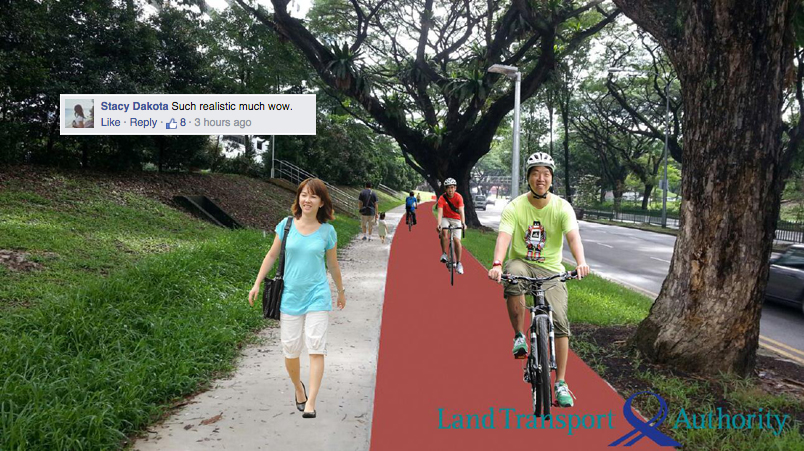 I’m a huge fan of Photoshop. Sure, it’s earned itself a bad rep for manipulating the female ideal, but the potential it brings in creating great images is still incomparable.

But with great power comes great…chances to screw up. In this case, it’s a Photoshopped image by Singapore’s Land Transport Authority (LTA), which was shared by local newspaper TODAY and then spread on Facebook, thanks to its shoddy graphics work.

For a caption-less image, it has received a crazy number of shares (182) at the time this article was published. With lights reflecting off the people depicted in the image from many different angles (despite all of them being in the shade), a complete lack of shadows, and an MS Paint-style red bike lane, netizens are have the time of their lives showing TODAY exactly what they think about this image.

Many TODAY readers didn’t realise that the image wasn’t created by the popular news publication, and took the opportunity to poke fun at the publication or lament the state of the Singapore media’s Photoshop skills.

In comparison, the LTA post sharing the same image received almost no traffic at all (though there was one netizen who commented on — you guessed it — their Photoshop skills). The Internet will always be the Internet it seems, unpredictable at best.

At the end of the day, the question remains as to why a bad Photoshop job by a government agency should garner so much attention. After all, we have definitely seen worse in our day, and as far as a depiction of new biking lanes go, this is a pretty effective one. At least it’s clear that it’s a bike lane, right?

So let’s give the poor Photoshoppers a break, and admire the wonder that bad Photoshop jobs can really bring.