Things About SG50 We Will Miss (Or Not) 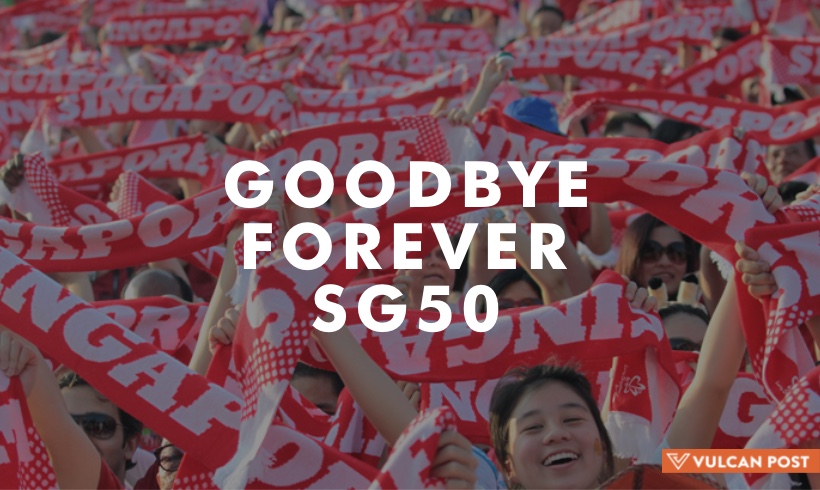 We did it, we made it through 2015, or Singapore’s Golden Jubilee, or 50 years of independence — you know, just in case we forgot. There’s no denying that the SG50 hit us hard. Real hard. There’s no living soul (non-living too) in Singapore who was spared from the national-wide campaign that was SG50. From bus interiors to fishcake, 2015 was the year we all got infected.

So as the year draws to a close, let’s all get a little sentimental, a little reflective, and think of the many ways we’ll miss the year long birthday bash of Singapore — damn old girl, you sure know how to party.

After a while we just got so used to seeing the iconic red dot on things in the supermarket, on posters, on television that kinda forgot what was SG50 and what was not. We reckon that it’ll take some getting used to sans SG50 branding, but we’ll pull through resiliently, we’ll pull through.

Weepy videos to remind you that you are Singaporean

Say what you want but SG50 saw a different side of Singapore — one that was more sentimental, kind, and warm than we’re accustomed to. And what a year for us. It was a year that opened with the promise of great celebration as we entered five decades of independence, it was a year we also lost a significant figure key to that independence we were proud about — as Singapore dealt with joy and sadness at the same time, something happened.

No longer was there a manufactured rah-rah attitude of celebrating all things Singaporean, the feeling was actually genuine and this reflected in several ad media campaigns launched this year.

Cringey videos to remind you that you are Singaporean

While some videos are tastefully done, some are just… a wreck. Still, we accept the all the sorts of love shown for the country during this period and unfortunately the nation had to swallow some really big pills too.

Someone remind us why Ferraris and silly clothes represent Singapore?

Suddenly there was a huge appreciation for Singlish and instead of shunning the lah, leh, lors, we saw many embracing it and being proud of this language that is neither borrowed or part of some campaign, but truly ours.

There were many great initiatives launched this year under the SG50 branding. Over the months, consumers in Singapore were flooded with ad campaigns celebrating the nation in all its glory and we saw creative, original, and innovative ideas come out from this.

And then there were some campaigns that just did not hit the mark. Fishcakes, Hello Kitty, tissue boxes, haircuts — nothing was spared from the ubiquitous red sticker. Can don’t SG5o for the sake of SG50 or not???

…And complaining about it

Singaporeans love to complain. So when a mediocre SG50 campaign rolls out, we’re quick to point it out, make fun of it, complain about it, make news about it — but that too will come to an end. Let’s find something else to complain about next year together, Singapore!

All the government incentives we could utilise

Giving birth to a baby this year brought people so much luck. Literally. From SG50 babies to the tax exemption because it is Jubilee year, even government bodies were capable of being celebratory this year.

It was nice to see local arts and music enjoying a bigger audience this year, but we hope that this would be the case. With a lot of emphasis put on the Singaporean talent and homegrown culture, musicians and artists are the first ones in mind. We saw the Singapore: Inside Out campaign kick off in a couple of major cities around the world like Beijing, London and New York where locals were introduced to our local talents in an intimate setting. Culture’s definitely not dead in Singapore!

All that aside, we’re kinda ready to move on to 2016 and we’re not quite sure what will hit us next. Surely there’s no oomph to ‘SG51’ right? But before we move on to a lesser campaign-y year, let’s say goodbye one last time with a nostalgic video for the feels.

Also Read
Get Into the SG50 Spirit With The Sappiest, Most Heart-Wrenching Singapore Videos Of All Time
Categories: News Reader, Must Read, Singaporean