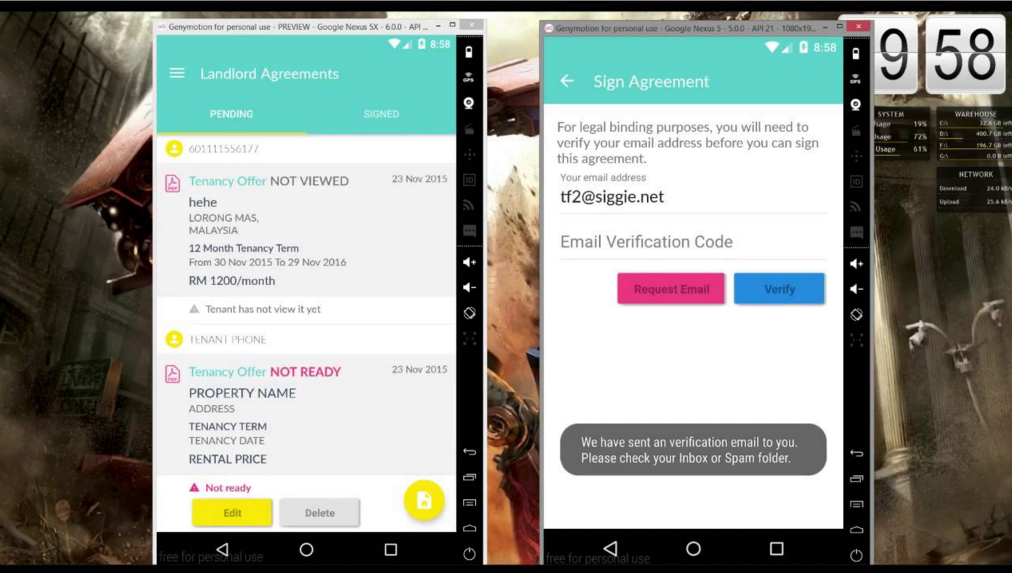 Whei Wong’s overall vision has always been to digitise the entire rental process and to empower landlords to rent houses to potential tenants without going through the hassle of ever dealing with property agents.

He founded Speedrent, a mobile app that does exactly that. It’s a platform that eliminates the middleman, in this case the property agents, by creating a self-sustaining ecosystem that brings landlords and tenants together.

While the ecosystem is relatively successful in enabling both landlords and tenants to negotiate and forge out a deal, it still required them to take up an additional step to draw up a manual tenancy agreement—a step that the team at Speedrent thought had to be digitised.

Armed with only a team of two developers and a UI/UX designer, the team conceptualised and launched their new app, Speedsign in just 45 days. Speedsign is an app that lets landlords draw up a digital tenancy agreement in less than 30 minutes without requiring any professional help. Once they draw up the agreement, they can simply send it over to their tenants electronically and get it signed.

“There are owners that are doing DIY even without the existence of Speedsign. So we are filling this underserved market with our app,” Whei Wong said.

This app essentially digitises the most immediate step that comes right after a landlord agrees to rent out their house to a tenant—and that is signing a legally binding agreement. It’s a step that requires a lot of clarity for both parties, and the app guides landlords throughout the entire process, so that they don’t miss any detail that may pertain to the agreement.

The app also automatically saves the progress the landlords make on the app, and this function gives them the opportunity to start and finish filling in the fields at their own pace.

The team also had to put a significant amount of time to figure out all the legalities that surrounded the concept of their app. After all, what’s the point of signing a digital agreement if it’s not legally binding?

Firstly, it’s important to note that Speedsign is only a tenancy e-contracting platform and they don’t offer any legal advice through the platform. Whei said, “Owners and tenants are suggested to seek legal consultation if needed. A reputable law firm drafted our tenancy template, and we made sure that the agreement was fair.”

However, the team does claim that a digitally signed tenancy legal agreement and the duty stamped copy will be admissible in court according to Section 7 of the Electronic Commerce Act 2006, and Section 62(2) of the Digital Signature Act 1997.

Given that digital signatures are legally binding, the app makes use of a third-party service called HelloSign that enables platforms to obtain secure and legally binding electronic signatures from their users. It’s a service that’s widely used around the world in various platforms, and in fact, it’s also used in some of Google’s products like Gmail.

Also once the landlord pays Speedsign the stamp duty fee, the team will get the agreement electronically stamped by Lembaga hasil Dalam Negeri Malaysia (LHDN). Thus, making the agreement admissible in court.

Currently, Speedsign is currently available as a beta version on Android and it’s free to use only till the end of the year. However from next year, the app will charge a flat rate of RM199 and RM 299 for 1 year and 2-3 year tenancy agreement, respectively.

The flat rate will also cover the cost of the stamp duty, and it will inherently help the tenant to settle all the stamping issues without any hassle.

The app will also be released on the iOS platform around the end of next year’s first quarter, as the team is still working on improving the current app. So far, the beta version on Android has been downloaded a couple hundred times but it’s expected to grow along with the Speedrent app. “We expect 20% conversion from Speedrent deals,” he said.

The Speedrent app on the other hand has a few issues of its own. The platform is susceptible to scams, tenant profile filtering, and it can’t help landlords to attend viewing appointments. Addressing these issues, he said, “We will address ALL the points and do it in a much superior way than the current practice. We have shown that with Speedsign.”

“We are really focused on bringing the offline rental processes online to make the entire process simple, cost effective and faster. That itself is a 2 years roadmap.”

While I admire the creativity of Speedrent’s team, I honestly wonder what’s next—Speedsell, maybe?

Also Read
The Unheard Tale Of The Controversial Property Rental App And How It All Came To Be
Categories: Products, Lifestyle, Opinions, Serial App User, Entrepreneur, Geek, Malaysian, Editor's Picks