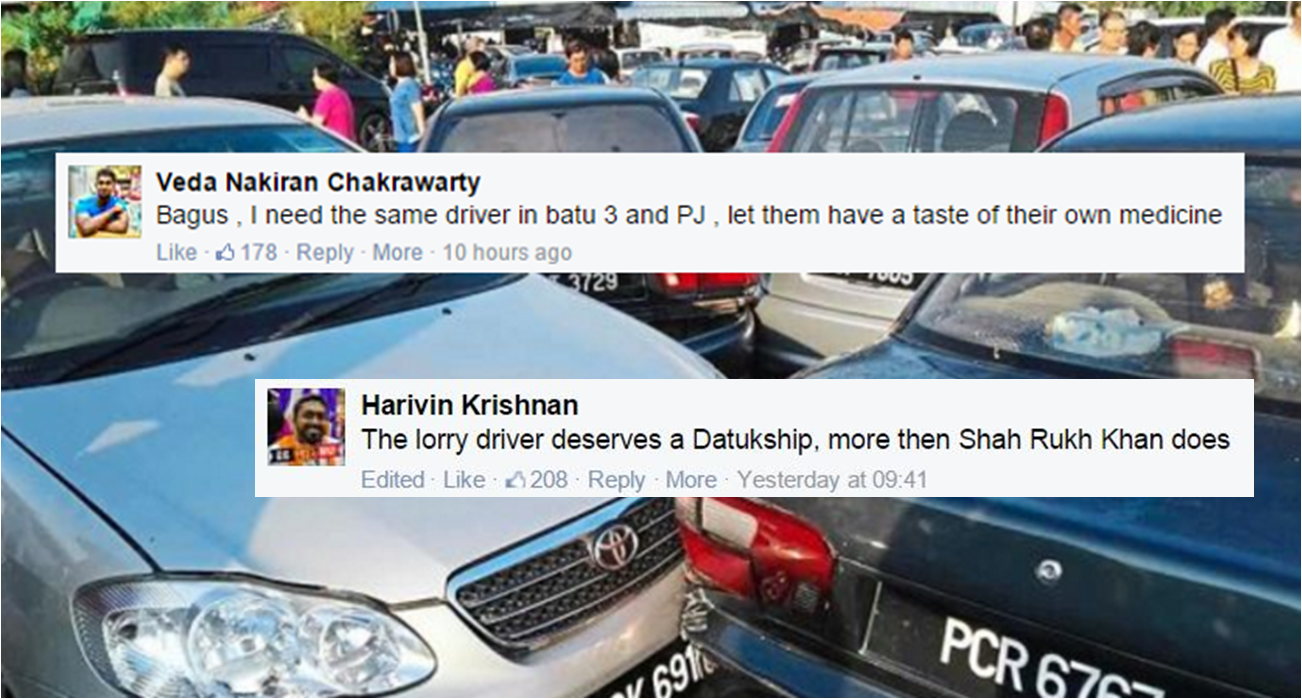 Everyone deals with their bout of problems in a different way. There are those who choose to deal with it through words, and this includes posting up a social media update about their thoughts and concerns over the matter. Then, there are those who go about it physically, sometimes lashing out on other people. These are the ones that get written about instead, and this is exactly what happened when an angry lorry driver rammed through 18 cars in a bout of discontentment.

Yesterday morning, a lorry driver who was in a market in Taman Berjaya found that his lorry was being blocked by several cars who was parked along Lorong Rajawali 2. According to The Star, his lorry was parked there since Saturday and most of the other cars blocking his way belong to market-goers.

Onlookers had tried to calm the angered man and stop him from exemplifying his actions, but to no avail. As for the owners of the cars who received some bruising from the incident, at least 7 of them chose to file a police report.

Now you’d think that an impulsive act like this would bring about the rage of netizens. You would even assume that most people would advise the lorry driver to go for an anger management class. However in reality, it is quite the opposite.

When the news about this incident was shared through social media, most netizens took the lorry driver’s side instead of the owners of the wrecked cars.

Facebook user Shah Benny said, “I don’t blame the lorry driver…let this incident be a lesson to all who park their cars blocking the road…” Another social media user who agreed with Shah Benny, Tony Chen said, “I fully support the lorry driver for taking such drastic action to drive out, too often we encounter such selfish drivers who only think for themselves.”

It is true that double parking is an issue that most Malaysians have to face daily, whether due to lack of parking or drivers who “would only take a minute” to run their errands.

What this lorry driver proves is that double parking is a selfish action, but at the very least, the drivers of the 18 vehicles could do was to have some courtesy to leave their number behind. Perhaps if that were to happen, then the lorry driver would not have taken such drastic actions to ease himself out of the space.

But let’s be realistic here, if every driver got out of a tight spot from ramming through other cars, there would be a whole lot of wreckage on the roads—which in turn would create more traffic congestion instead of solving the problem.

So although this is a problem that plagues every congested area, and as much as we want to get a tank to smash through every car that’s in our way, let’s just keep that scene in our heads.

Also Read
What The “Ori” Ola Bola Team Looked Like And Some Facts You Didn’t Know About Them
Categories: Opinions, Social Media User, Malaysian