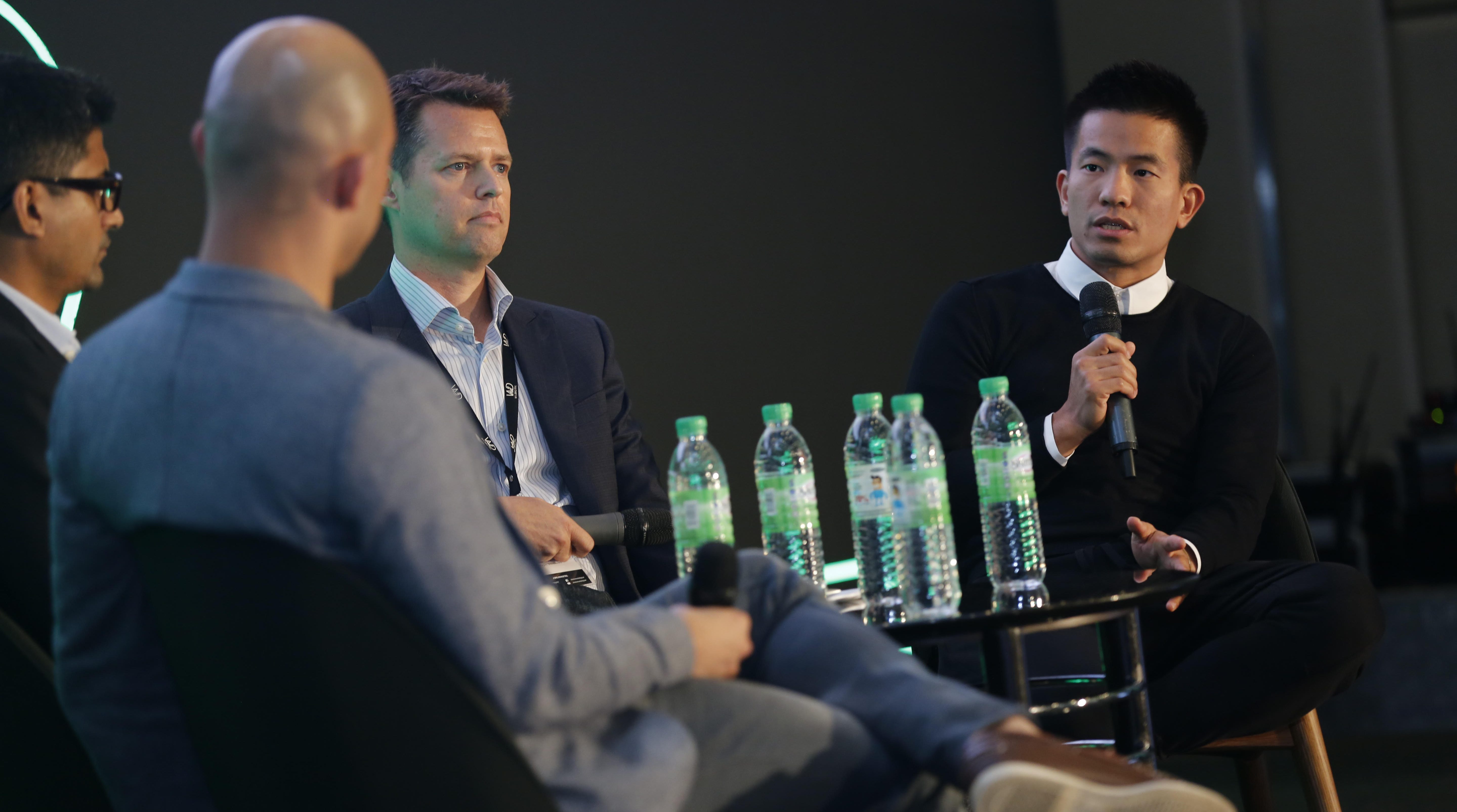 “The time it takes to build a company with a 100 billion USD valuation has dramatically shrunk. How long does it take to create value equivalent of every company in Malaysia?”

On a bright Wednesday morning, Patrick Grove of Catcha made his way onto a sleek stage with lights reminiscent of a minimalistic Tron, and said:

“One of the fundamental things I believe is that Silicon Valley does not have the monopoly on great ideas, on great execution. It doesn’t have a monopoly on great types of companies. There are great internet companies in India, China, and particularly Europe. And for the past 5 years we’ve been spending a lot of time studying these great companies and we get a lot of inspiration from these companies, moreso than companies in America.”

And this was how he launched into his keynote speech that morning about why now is the best time to be in tech in Asia, kicking off this year’s series of talks for Wild Digital 2017.

Of course, a man in his position would hold those thoughts by default. But Patrick did present some very compelling arguments to make his case that morning.

The Tech Scene In Southeast Asia

So it turns out, there are more smartphone users here in Southeast Asia than there are in both America and Europe. So if there are any questions about the potential market for tech in Malaysia, Patrick Grove can say that Malaysia’s social media use averages out to 2 hours per day right now, tallying with first-world countries like USA and Britain. But in other Southeast Asia countries, they’re more often inching closer towards 4 hours instead.

The most Instagrammed place is a mall in Bangkok. And Philippines reigns as number 1 in terms of time spent on the internet.

Patrick points out other things, like our supportive governments here in Southeast Asia. Malaysia’s own runs a whole plethora of programmes and bodies, ranging from MaGIC, MDeC to Cradle and the DFTZ.

Companies like Grab, Go Jek and Garena (now SEA) are proving that you can build multi-billion dollar companies in Southeast Asia.

“We can grow unicorns. Two years ago, when they said that Southeast Asia can grow multi-billion dollar tech companies, no one believed them. It’s too small, no one was interested in this part of the world. Well today, we now have 3. I’m willing to bet by this time next year we’re going to be 5 to 6 more.”

“This is the global phenomenon. All the major shopping streets in the world now have empty shops. Why? Are people shopping less? No, people don’t shop in shops anymore, they go online.”

“When everything goes online, you start to wonder. Will shopping malls exist? [In the future] will hotels exist, will office buildings exist?”

And he wrapped up by saying that yes, because of all of these factors, now is the best time to be in tech in Southeast Asia.

Is It A Ticking Time Bomb?

Patrick certainly sang his praises for tech in Southeast Asia, even making predictions about the death of hotels and retail malls as we know them. But some naysayer voices do ring. Is the tech scene here just a bubble that’s going to burst eventually?

To address this, the panel “Is There A Tech Bubble In SEA?” took place, hosting 500 Durians‘ Khailee Ng, Ayudash Jhunjhunwala of APAC TMT and David Gowdey of Jungle Ventures. As people involved in the investing side of things, one would argue that they have a stake in the future of tech. And here’s what they think.

We haven’t even invested in its full potential.

For Khailee, he argued that, “If I’m someone with 83 billion dollars, am I going to put it across all these public companies, or am I going to bet on the future? The world is so different today than it was before. The whole talk about the top 5 most valuable companies all being tech companies—that’s a great sign that all these SMEs will be tomorrow’s MNCs.” (SMEs – Small to medium enterprises; MNCs – multinational companies)

“How can they not use digital to get there? If you’re really investing in a digital future, you’ve gotta go with it the right way. And there’s just too many people going into it too meekly. They’re dabbling. How are you gonna own a big position in the future?”

David added, “One of the key tenets of having a tech bubble is it’s going to be unsustainable. And I think if you look at the growth that the region is expecting in the Google | Temasek report, it’s a fantastic report. There’s an enormous amount of sustainable growth.”

Khailee picked up on this, and added, “I think another slide in there (the Google | Temasek report) that’s so powerful is, they aren’t just growth. The opportunity today captured by fundamentals you talked about earlier: GDP. The amount of venture capital allocated relative to GDP in SEA is abysmally low compared to India, China and USA. 6–30 times lower. Which means, SEA isn’t even investing up to par to capture the value of today’s GDP offers.”

Ayudash brought Patrick’s point of internet connectivity, afforded by the increased use of smartphones but then goes into infrastructure.

“And the other thing to keep in mind is physical infrastructure is getting replaced by internet ones. If you look at AT&T, they’ve invested 300 billion dollars in their lifetime on physical infrastructure. They make 200 million dollars in revenue so if you look at revenue over company investment that’s about 0.6 times. But if you do the same calculations on Amazon and Alibaba, you get a much higher number.”

But What About Zombie Companies?

When the possibility of zombie companies is raised, certain recently-sold national companies come to mind. According to Wikipedia:

“Zombie company” is a media term for a company that needs bailouts in order to operate, or an indebted company that is able to repay the interest on its debts but not repay the principal.

These experienced investors argued that they knew what they were investing in, based on experience.

What I derive from their thoughts is this: investing in tech companies is no different from investing in any other startup. The devil is in the details.

Khailee even pointed out that it’s oddly opposite here, with companies being very careful with their finances. “A lot of founders are notoriously tight with their wallets. I see a lot of Singaporean kiasu ones,” referring to Carousell.

But even if there are over-investments, there are opportunities. According to Khailee again, “So what’s happening in a lot of e-commerce marketplaces—it’s true. There’s a lot of money in it. And they’re doing a lot of promos and paid acquisition to get people to use the platforms and marketplaces. So what we’ve done is invest in companies that own their own products, who put their products on these marketplaces.”

Khailee gave the example of shoe company, Brodo. “We invested in them and they manufacture their own shoes. They didn’t seem to much like a tech company, but they were making a lot of sales on e-commerce and Instagram. Other companies are just doing custom acquisition for them. So they triple their growth in a year and were profitable when we invested and are still profitable now.”

Okay, but why have there been a lot of down rounds in the SEA market?

Basically down rounds are “rounds of financing that value the companies at less than the previous round“.

David brought up the e-commerce market in Indonesia and how that was a major contributor. “And when the market didn’t materialise in the way that everyone was expecting they were left in a situation where they had put in a huge amount of capital to provide consumer offerings which was unsustainable with the level of discounting that was happening.”

“A lot of the dynamics in the household where Indonesia is coming from is very different from China. So I think you’ll see a lower takeout in consumption. More in India, probably, but less in China.”

That being said, isn’t the specific problem that David described in Indonesia sort of happening in Malaysia? With the increasingly saturated e-commerce scene in Malaysia, many e-commerce marketplaces are resorting to discounts to remain competitive.

Or perhaps, that is just a part of the necessary growing pains for any e-commerce infrastructure to play out in any country, and Malaysia is just going through a necessary evil.

However it goes, we certainly hope that this isn’t the case. Everyone involved in this discourse gave some insightful opinions into what is happening in the scene, and a general takeaway is that the tech scene in Southeast Asia still has a long way to go.

We can learn from what more mature industries in the world looks like. But how Southeast Asia paves our way might eventually be on a different road than how China, Europe and even USA does it. And perhaps, the road less travelled makes all the difference.