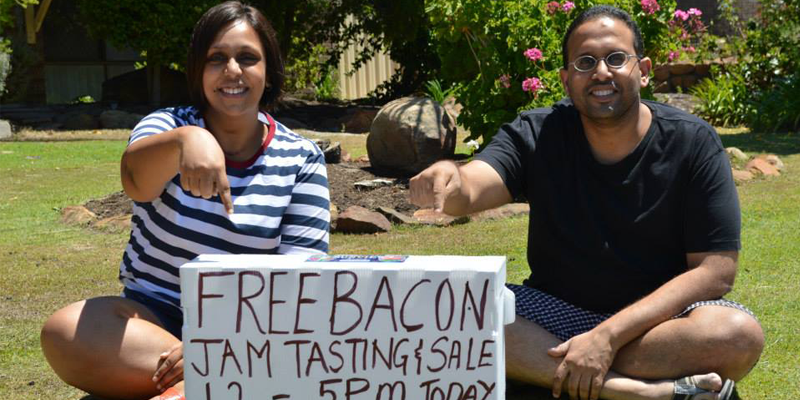 Over the past few years, Malaysia’s F&B scene has seen many new products and ideas pop up, and when you think you’ve seen it all, along comes bacon jam.

Bacon is unfailingly a crowd-pleaser, and Five & Two Fine Foods are using this as their flagship product, alongside other offerings.

The co-founder, Georgina Fernandez was a creative director at a local advertising agency before starting Five & Two Fine Foods along with her husband, John Peter.

Neither of them have any formal background in culinary arts nor the F&B industry; John spent over 20 years in the education industry. Now they’re a two-person team who handle everything from supplies and shopping to cooking, packing and delivery.

It all started with Georgina’s interest in the art of cooking. She wanted to put together ingredients in unusual combinations, thus bacon jam was born.

Contrary to what you’d think from the name, bacon jams are not a combination of bacon and jam.

“Bacon jams are a multi-purpose condiment that can be used as a spread, dip, cooking sauce or marinade. They are made from minced bacon and various ingredients, into a thick sauce, not unlike the consistency of a thick bolognese sauce, and bottled to be enjoyed in any which way you like.”

Bacon jams are available the US & Australia, but in a very minimal and non-commercial way.

“We decided to do our own spin on it and introduce it to Southeast Asia, as no one was doing anything exciting with bacon, which is really quite a versatile meat!”

“A whole range was born from just one experiment, leading to delicious spin offs like Asian Bacon, which is of course, not available anywhere else in the world.”

Since then she has created many variations of bacon such as Bacon Jam with Chocolate, Bacon Sambal and even Sichuan Bacon.

However people weren’t used to eating bacon from a jar.

“All they knew to do with it was to pan fry it and have it with breakfast.”

Thus Georgina and her husband had to get people to understand the concept of it. They started out by going down to the grassroot levels and letting people to taste it.

“[We spent] hours and hours on our feet talking to and getting customers to taste the product and understand the concept only to have them fall in love with it at first bite.”

“The challenge was getting them to take that first bite.”

Their first big break came at Foodie Fest, which is an artisan food bazaar at Publika.

“It got us a lot of customer and media eyeballs and the products were very well received by our target market.”

“John and I do not come from rich families. We used all of our savings to start Five & Two Fine Foods and keep it afloat.”

They started R&D in 2012, and had to keep it going in the face of economic downturns and societal taboos.

“Growth is also a financial challenge,” Georgina stated. The Malaysian economy took a bit of a tumble a couple of years after they began.

“But we dug our heels in and stuck with it, refusing to cave in although the pressure to was very strong.”

They had to resist the urge to open up a brick-and-mortar shop as many other artisans were doing. However, Georgina and her husband recognised that the world was trending more towards online shopping.

“We firmly decided that we were going to be an online store for most of our products.”

“A lot of artisans who began around the same time we did have had to close down their brick-and-mortar stores, have lost a lot of money in the set up and been forced to return to the work force.”

Without opening a physical store, they managed to keep their overheads low and manageable, putting the extra cash into R&D.

Five & Two Fine Foods see themselves as the one and only producers of bacon jam in their variety of flavours not only in Malaysia but Southeast Asia.

“We have carved a niche for ourselves in an area where there are almost no players.”

Their most popular products are the Bacon Jam Original, Bacon Sambal and Candied Bacon Stix.

“I would put the sales of both jar products at about 3000 jars each, to date.”

Their products have travelled all over the world, including Norway, Australia, China, USA and Europe.

“It is exciting to know that our products have been enjoyed and accepted in places that we are yet to set food in.”

They have begun to also embark into daily meals to cater to a larger market.

“We began Daily Dinners a year ago and it is quickly gaining popularity especially among the working sector who crave a fresh, healthy home-cooked meal when they get back from work.”

Currently Five & Two Fine Foods are slowly expanding their reach within Malaysia by signing on exclusive distributors in other states.

“At the start of 2018 we signed on a distributor in Sarawak, East Malaysia and are looking at adding on more.”

They are also looking at expand into the global market as they already have interest from overseas buyers.

“[We are hoping to get the] interest of international franchise manufacturers into obtaining a manufacturing license from us to produce and distribute our exciting range of products in their own country.”

“We are constantly on the lookout for partners on a global level who can work with us to take these products to a much larger audience.”

Georgina brought it down to one clear value.

“You need to know food. Know how to offer a consistent, winning taste each time.”

Their faith is also pivotal to the business and how it runs. Fun fact: their name and logo has biblical roots and is based on the miracle of the five loaves and two fish.

“Our faith dictates our corporate mandate of honesty, transparency in our dealings and responsibility to our customers. We believe we have a higher, all-seeing power to answer to and that integrity is doing the right thing, even when no one is watching.”

For the industry in general, they hope to see less commercial chains with central kitchens and more artisan food around. They want to see more F&B outlet owners who are committed to serving quality food at fair prices and who are also compassionate to their staff.

People often think F&B is a glamorous and fun business, however Georgina would like to send a gentle reminder that it’s actually not.

“It’s hard work, blood, sweat and tears. It’s many many hours on your feet and many untaken holidays. It is also a very responsible business as people come to your place to put food into their stomachs trusting that it will be responsibly and cleanly made.”