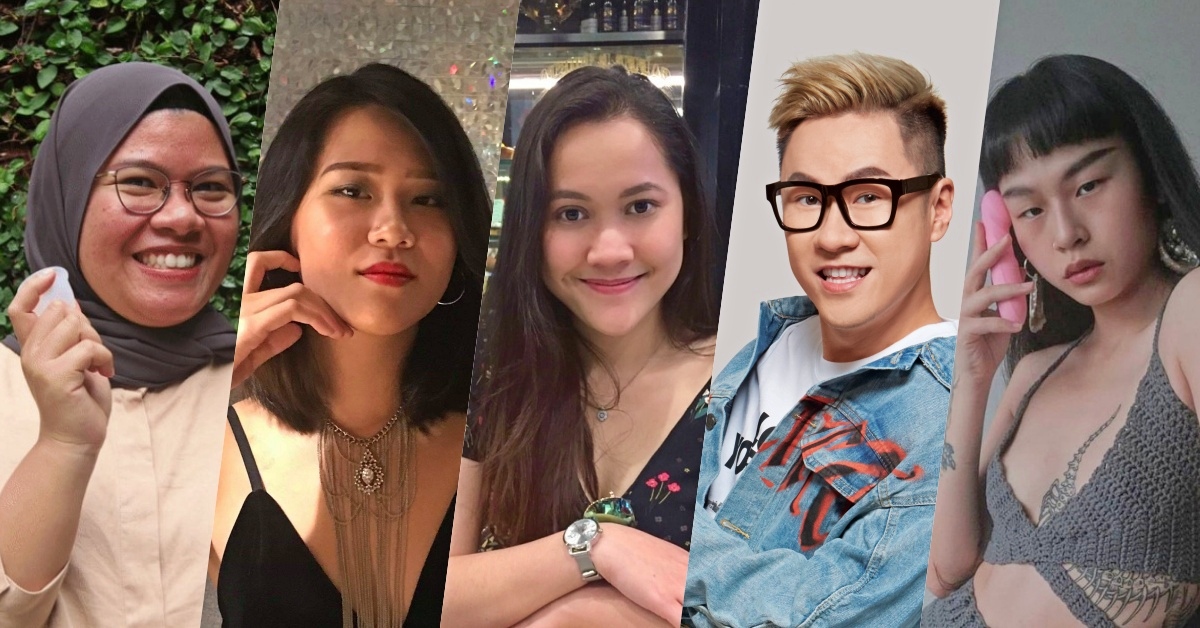 Recently, menstrual pad brand Libresse came under fire for its Know Your V campaign, which is aimed at normalising discussions surrounding the vagina.

Following the release of its V-Kebaya Limited Edition range of pads, non-profit religious organisation YADIM Muslim Women’s Council (MAYA) called out the brand for its actions that brought “dishonour to women”.

MAYA argued that the use of vulva imagery on Libresse’s products was an exploitation of women’s bodies in advertising.

This event soon blew up on social media, where netizens pitched in to give their two cents on the Know Your V campaign and the use of vulva imagery.

At a glance, it seemed like most netizens were in support of the campaign, challenging MAYA’s statement with their arguments.

But what do other brands within this space think of what went down? Thus, Vulcan Post spoke to businesses that deal with sexual health, sex positivity, and menstrual health. They are:

A campaign with good intentions

Faizah shared that her team was wary but not surprised at the public’s reaction to Libresse’s campaign.

“In our experience, conversations about menstruation, especially when it involves the female reproductive anatomy, can be very polarising in a public that is steeped in cultural and religious norms.”

Libresse’s campaign hits close to home because it’s in line with Suci Cup’s philosophy too—conversations that deconstruct the taboo and separate myth from fact are important drivers for education and awareness.

Such representation matters, and Libresse has created a space for people to think about and ask questions that they may have been too shy or too ashamed to ask before, Faizah said.

It was also all the more impactful that Libresse, being a larger brand, contributed to this initiative, Lith felt. “Know Your V, we believe, was a great initiative, and it’s rare to see big brands in Malaysia push for this narrative (and by extension, progress), and it for sure sparks confidence and optimism, despite some people heavily disliking it,” she shared.

Aside from sharing the same sentiment, Azryn and Jun added, “We need to normalise open conversations on issues like sexual health and body awareness so women everywhere know that if something out of the ordinary happens, they know where to turn to for help.”

They also brought up some double standards about the controversy, pointing out the ads across Malaysia with explicit messages of how to “keep your man satisfied” or “keep ‘it’ as tight as a virgin’s” that can still be found mainly in rural areas.

Did the vulva imagery help the cause?

It could be said that one of the biggest triggers for the religious groups was the imagery of vulva used by Libresse, despite being heavily stylised as flowers.

Jeff felt that there was nothing wrong with that, likening it to how P’sang would create educational visuals of modified bananas to represent the penis in order to teach its consumers about the anatomy and proper use of condoms.

Lith was all in for using visuals to contribute positively to the conversation too, as she said, “Not everyone can learn through words and speech alone!”

“But it’s not just that. It’s also about the normalisation of these. You’d be surprised by the number of adults who don’t know what their vulvas look like, and by normalising these completely normal and important parts of our bodies, you educate people.”

She did make sure to point out that there still has to be a distinction between what’s too explicit or not, but didn’t think that Libresse crossed that line.

Faizah pitched in, stating that the female body is shrouded in myth and taboo, and therefore is considered both pure and vulgar. Making art using images of the female body then is a way to represent its liberation.

Like Lith, she said, “Normalising images such as these can remind the public that the female body is normal, not just sexual, therefore reducing the stigma associated with female bodily functions.”

But the Suci Cup team believes that a sensitive subject should first be approached in a scientific, factual manner, whereby understanding what the organs do can lead to better appreciation. For example, focusing less on the images of the vulva, and more on conversations with real people.

Libresse later withdrew its ad campaign from various channels following MAYA’s callout, stating that it had no intention of offending any woman or community.

However, supportive netizens stated that there shouldn’t have been any need for Libresse to do so, and that it was a shame that the brand had to adhere to such a patriarchal narrative.

If they were in Libresse’s shoes, what would our interviewees have done?

As the world’s largest condom maker, Karex is no stranger to the struggles of being a controversial business due to the existing taboos.

Being the face of Kakak Kondom, a fictional character originally built for the sole purpose of bridging the gap surrounding sex ed, Azryn has had her fair share of criticism.

To navigate potential backlash, her team has to make sure that their content is as light as possible, lest they ruffle the feathers of certain communities.

In Faizah’s case, she stated that Suci Cup would have probably taken actions similar to Libresse’s, but with a stronger justification for the goals of the campaign in the first place, which should match the company’s own values.

“For us, the goal is to deliver female reproductive health education and awareness in a fact-based and approachable manner so that more women are comfortable using our product—if the public feels too uncomfortable with it, we can choose to maintain the message but change the approach.”

Lith’s team believes that Libresse didn’t have to pull the campaign, but that it “caved into pressure” and did it because it had to.

“Malaysia isn’t anywhere near the level of openness and acceptance just yet, so it’s hard to say what we’ll do. We want to say that we’ll stand strong by our stance but whether or not it’s the right time to do so, it’s very hard to say.”

Sometimes platforms have to take it slow, it’s about getting your messages across slowly, things aren’t accepted overnight, but it’s up to businesses like us to slowly progress, and educate, regardless of backlash, and to do that you definitely need a platform first and foremost.

You can be careful, but can’t control people’s perceptions

With their businesses being directly related to private parts and/or sexual health, our interviewees shared their experiences of marketing their products or even just creating relevant content.

As it sells menstrual cups which need to be inserted into the vagina, Suci Cup’s biggest challenge has been answering questions related to the topic of hymens and virginity.

“In order to mitigate the risk of controversy, we collected expert data and professional opinion on a vast array of related topics and produced content using this information in conversational bits and pieces,” Faizah said.

“This fight-with-facts strategy, as well as our team’s strong product and market-relation knowledge, was key in helping the brand get off the ground.”

She added that instead of red tape, they’ve also been lucky to now be considered a hijab-friendly voice for female reproductive health awareness.

Jeff said that until today, P’sang is still figuring out how to publish condom ads, as even just a vector of a condom or penis is categorised as “promoting sex” and will be rejected on the basis of policy violations.

“We are being very careful, trying to share some bold images, but there is a line where we have to be very careful not to cross,” he added.

Guidelines exist, but he concluded that even following them could still result in unpredictable situations, since it’s impossible to control how people perceive content.

Karex has had similar difficulties, and also has to walk on eggshells when it comes to running educational roadshows and events (pre-pandemic).

“It only takes one person to express any sort of displeasure, and in comes the cavalry,” Azryn and Jun said, but added that what’s helped has been “maintain[ing] a good relationship with many partners, local council, and authorities.”

Similarly, while Erosu believes in being open, one has to accept that not everyone will be okay with their values and goals, so a brand shouldn’t go out of its way to push buttons by crossing boundaries.

Brands, large or small, can sometimes make questionable decisions in the name of drawing attention, whether for the awareness of a serious topic or to put themselves in the spotlight.

But like many things that fall within a grey area, Libresse’s Know Your V campaign is polarising and has led to subjective opinions and reactions.

As we move on from this event, there’s an important and long-known but still underdeveloped takeaway: Malaysia needs better sex ed. Not just to learn about consent and sexual health, but also to understand our own bodies better instead of being ashamed by such discussions.

In the bigger picture, Jeff is of the opinion that this is important because having such knowledge can lead to the prevention of child sexual abuse, as experts have stated.

Azryn and Jun shared their views on sex ed, “A helpful first step would be to make a conscious effort to make a distinction between sexualisation and sexuality education.”

Sexualisation is when we limit our bodies to their sexual appeal at the exclusion of all the other characteristics that contribute to us as a whole, whereas sexuality education opens us to learn more about reproductive health, behaviour, and building healthy relationships with ourselves and others.

This presents an opportunity for businesses to come in and offer spaces for dialogue and communication, by participating in the conversation.

Additionally, Faizah believes, “The government can normalise the use of clear and correct female reproductive terms as well as pertinent images in their campaigns and broadcasting, regulate misinformation about female reproductive health, and provide more platforms for medical/expert and public engagement.”

Lith echoed the sentiment, saying, “We believe that governments have a duty to educate the people and to move them forward in regards to knowledge and acceptance, and it’s up to the people to make this known to the government.”

“Sometimes people have to take matters into their own hands too, like Libresse attempted to do—and that’s absolutely great.”