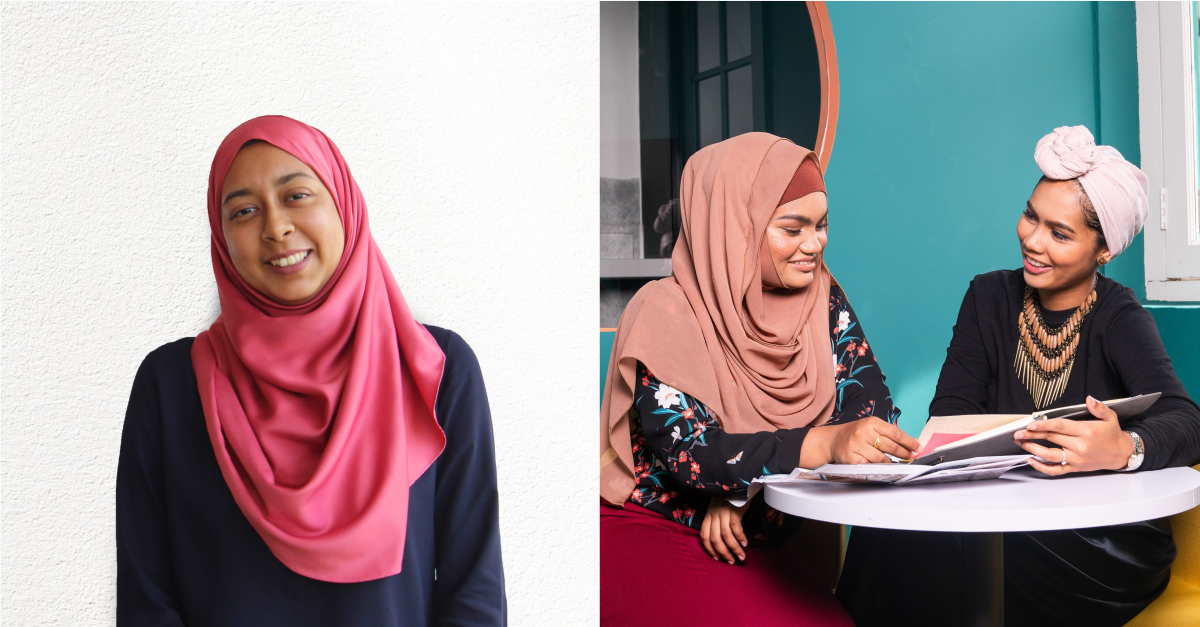 “Safe spaces are better for everyone. Inclusion is better for everyone. When we put women and diverse women at the centre of our programmes, we’re not excluding other communities. We’re saying we belong here too,” Nurul Jihadah Hussain, 34, the founder of The Codette Project, tells me over an email interview.

When it comes to the STEM (science, technology, engineering, mathematics) field, women only make up a measly 28 per cent of the workforce, creating what others call the “STEM gap”.

In Singapore, a study conducted by the Nanyang Technological University (NTU) found that out of 738 respondents, only 58 per cent of women who graduate with STEM degrees or diplomas go on to have related careers. This is a stark contrast to the 70 per cent of men who hold such qualifications in related fields of work.

These numbers speak volumes about the proportion of women to men in STEM fields. In this largely male-dominated industry, it can be intimidating for women to even consider venturing into these fields, which is why initiatives like The Codette Project that champions underrepresented women is important.

How The Codette Project started

The Codette Project is a non-profit organisation (NPO) that seeks to empower minority/Muslim women through tech. Inspired by the work of organisations like Black Girls Code in the United States, Nurul wanted to create more equitable outcomes through tech with improved access and opportunities.

The Codette Project offers programmes built on three pillars: reclaiming narratives of success, skills training, and community building. With a wide range of introductory classes and tech workshops, this creates a safe space for minority Muslim women to dip their toes into the world of tech.

“The success of underrepresented communities like minority/Muslim women is often something that hasn’t been imagined in many spaces, including tech,” said Nurul.

“By creating a safe space, we hope to reduce the perceived ‘barriers’ to exploring tech, and encourage more minority/Muslim women to do so,” seconded Atikah Abdul Razak, 28, who has been a volunteer at The Codette Project for three years.

“It is the essential first step to providing social and economic opportunities for them to gain access to the industry,” she added.

Indeed, when it comes to levelling the playing field, visibility and representation matter.

How the NPO tackles funding challenges

Like any other NPOs, funding is always a challenge and a constant hurdle. The Codette Project is fully dependent on donations to run its workshops and classes.

Even with noble aspirations and positive community outreach that The Codette Project advocates for, Nurul has been rejected on more than one occasion. Alas, all hope is not lost.

Facebook selected the Codette Project as one of their 115 projects to receive funding and training as part of their global Community Leadership Programme in 2018 — a triumphant and emotional win.

“I felt that all our work was finally being seen and recognised as being important. I was so surprised that they chose us alongside other huge projects but so honoured and grateful to have had the opportunity to learn.”

Nurul recounted another moment when global company Zendesk funded them through the Zendesk Neighbour Foundation in 2020. This was just after they had allocated their budget on their Codette Cares project.

“I cried on the call with Zendesk, and the team cried when I told them because it was such an unexpected miracle. We’ve been able to fund the 2021 batch of Codette Cares mentorship recipients in large part because of their generosity.”

Besides funding woes, the Covid-19 pandemic has also halted many activities since physical events are restricted due to social distancing requirements. This prompted them to pivot to online workshops.

In the thick of the pandemic, they also launched Codette Cares, their first mentoring initiative aimed at helping minority/Muslim business owners and students.

Their second run in 2021 has seen the number of applicants more than double, and they now have 17 female tech students in their Codette Cares mentorship programme.

Besides their classes and workshops, one of the major achievements of The Codette Project is their hackathons. For the uninitiated, a hackathon is like a design sprint event where computer programmers and other people involved in software development collaborate.

Organising a women-only hackathon raised many eyebrows, and the haters came in droves.

We’ve done things that were not really imaginable a few years ago, and which quite frankly, no one thought would succeed. No one thought that a women-only hackathon would work. We got feedback that women didn’t attend hackathons or weren’t interested in tech.

On the contrary, their hackathon was sold out twice, both in 2018 and 2019. The success of The Codette Project struck a chord with Nurul. It reminded her why diversity is necessary and pertinent to any industry that wants to move forward.

Their hackathons were the first and only ones to provide breastfeeding rooms, free childcare and prayer/meditation rooms — something most hackathons wouldn’t have even considered or thought about. Not to mention, the ripple effects of these hackathons are innately profound.

“We’ve seen women attend our events with their sons, husbands, brothers and friends, and we see this as a wonderful thing. Women are amplifiers of success. Their individual success doesn’t just impact them but their friends, families and their community.”

According to Nurul, half of their hackathon attendees have also been non-minority women. She credits this success to how the safe space created by The Codette Project resonated with them. This, in turn, further encourages women to venture into the tech space.

Beyond hackathons, The Codette Project aims to inspire and change the narrative of what success looks like in the tech world. Atikah, who leads the ‘Success Looks Like This’ project, created a set of stock photos that were published on Shutterstock.

These photos depicted a diverse group of women participating in the tech industry, including minority/Muslim women. For example, women leading discussions, giving presentations, using tech tools, and mentoring other women.

– Atikah Abdul Razak, volunteer at The Codette Project and lead of #SuccessLooksLikeThis

Given the longevity of stock photos on the internet and in a world where images are everything, a project like #SuccessLooksLikeThis means broadening the perception of what a woman in the tech industry looks like.

Atikah went on to launch a month-long exhibition at Jurong Regional Library, featuring the collection of photos that were published on Shutterstock.

The exhibition also included an interactive component where visitors could respond to the photos, with at least 450 visitors.

“We’re hoping that this is just the beginning of the work that needs to be done to redefine who gets counted as being visual representations of success, and especially success in tech.”

The future of STEM jobs for women in Singapore

As for the state of women in STEM fields in Singapore, Nurul remains hopeful of the future but believes there is always more to be done.

“I think STEM companies need to believe in women more. If women don’t apply or get hired, look internally for issues within the job descriptions or the hiring process before blaming women for not being interested.”

This is reflected in her team that is made up of 10 women and one man from diverse backgrounds — a fact that Nurul is extremely proud of.

“They believe in the ‘why’ of The Codette Project, and they show up for our community, and I often think of them as the best examples of our success,” affirmed Nurul.

Ultimately, the goal of The Codette Project is to help redistribute access and opportunity to communities that deserve an equal chance at success.

“We believe that all communities are equal in terms of intelligence, drive and capability. The gap that we see in terms of success is down to opportunity and access. The greatest barrier is people thinking that the problem lies in women, minorities, Muslims (or) individuals when issues are structural,” she asserted.

The entrenched systems of power in our society that continually persist cannot be dismantled in a day. Still, with organisations like The Codette Project making a difference and slowly shifting the needle, the future is looking promising and bright indeed.