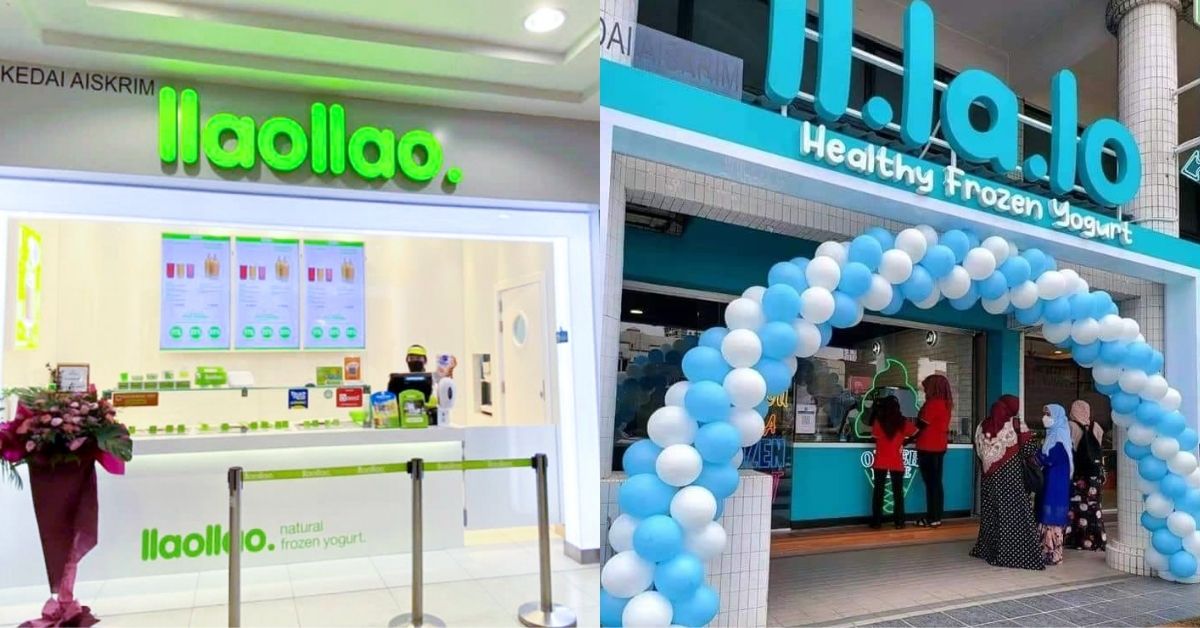 Disclaimer: This article is for educational and informational purposes only. It is not intended to be a substitute for legal advice. Readers are encouraged to do their own research before arriving at any conclusions based solely on this content. Vulcan Post disclaims any reward or responsibility for any gains or losses arising from direct and indirect use and application of any contents of the written material.

It’s hard to deny that this new frozen yoghurt store in Ampang bears some resemblance to llaollao, and netizens agree.

II.Ia.Io (those are capitalised “i”s, not lowercase “L”s as you might believe) is a new business that netizens are saying copied parts of Spanish frozen yoghurt franchise, llaollao. From the sans serif font to the long teardrop spoons, there are certainly comparable details between the two brands.

II.Ia.Io did not respond to our requests for an interview, but we reached out to some other sources that could provide some intel — lawyers.

First of all, what’s intellectual property?

Intellectual property (IP) is a class of assets that covers creations such as inventions, literary and artistic works, designs, as well as names, images, and symbols used in commerce.

The most common types of IP include trademarks, patents, and copyrights. Trademark refers to any sign represented graphically that’s capable of distinguishing goods or services of one undertaking compared to other undertakings. McDonald’s golden arches or Nike’s swoosh are some examples of trademarks.

Similarly, llaollao’s logo is also a trademark. Specifically, it’s a registered trademark with the Intellectual Property Corporation of Malaysia (MyIPO). The registration describes llaollao as a business providing ice cream parlour services, restaurants, and all included in class 43, which covers businesses in the F&B industry.

When I searched on MyIPO for any trademarks registered for II.la.lo, none came up.

According to Yeow Jie Han, partner at GLT Law, there may be a likelihood that II.Ia.Io is deemed to have infringed on the llaollao trademark.

For registered trademarks, infringement can be established if:

The first has already been established as llaollao has a registered trademark. As for the second point, II.Ia.Io does offer similar goods (frozen yoghurt) as llaollao.

As for the third part, it might not be as clear-cut. According to Jie Han, the following elements will be taken into consideration to check whether there is a likelihood of confusion on part of the public:

Jie Han added, “The courts have established that consumers do not recall or remember every detail of the trademarks they know. Consequently, they may confuse a similar mark with the one they know, even if there are minor differences between the marks.”

This principle is known as the imperfect recollection principle and is almost always applied to trademark infringement cases, he shared.

“Thus, although a consumer’s POV that there are similarities may not be conclusive in determining if there is trademark infringement under the law, it is still a very persuasive point that would tip the balance in the original brand owner’s favour.” That is, if they decide to go to court over it.

Since it’s a common sight to see e-commerce rip-offs of other more popular brands, we asked Jie Han if the situation would be different had ll.la.lo stayed completely online.

He responded that as long as a brand still provides goods or services that any other brand has either a registered trademark for, or has created goodwill in relation to such goods/services, then the legal exposure would remain the same.

In any case, there has been no court case (as far as we know) over this situation. Most netizens have already made up their mind about ll.la.lo being a llaollao copycat though, and this has even caught the attention of llaollao Malaysia, who later posted a response in the form of a meme.

How can brands protect themselves from copycats?

Jie Han advises businesses to register their brand as a trademark even before it notices a copycat in the market.

“The benefit of registering a trademark early is that if another business attempts to register a trademark that is similar to the original registrant, the other business would likely be prevented from doing so as MyIPO would flag it as being similar to an existing registered trademark (as part of the trademark registration application process).”

“Therefore, having a registered trademark at the offset would prevent the costlier and more time-consuming process to wrest back the actual brandowner’s rights from the copycat.”

As for any upcoming brands that are thinking of leveraging established names in the industry to bolster initial traction, Jie Han advised against doing so. It’s often said that imitation is the greatest form of flattery, but there still exist boundaries that shouldn’t be crossed.

He believes that it’s prudent for business owners to understand what they can be inspired by (think implementing a similar business model and structure to that of a successful brand) versus what is considered off-limits misrepresentation or infringement (using the name of an established brand to drive sales for your own products/services).

It is thus important for business owners to be well-informed and well-advised before incurring time, money, and resources into a venture that can be swiftly struck down due to the enforcement of intellectual property rights.

Malaysians might be familiar with the local brand PENSONIC, which sounds rather similar to Panasonic. Panasonic has taken action against PENSONIC before. In Singapore, PENSONIC was disallowed from registering a trademark because the mark was ruled as “aurally and conceptually similar” to Panasonic.

However, as we know, PENSONIC is still a well-known brand in Malaysia today, and continues to co-exist with Panasonic in several other countries. So, it comes down to how the court rules.

If a trademark dispute is brought to the courts, then the court’s ruling would decide the fate of a brand. Although, one cannot discount the power of public perception too.

To promote ethical business practices, the logical thought would be to support the original brand instead of its copycats, but customer loyalty is a fickle thing. Those who are less discerning would be happy to support whichever brand they feel gives them a better bang for their buck.

Healthy business competition is always welcomed, but any entrepreneur worth their salt would know that there’s a proper way to do so without infringing upon the rights of other brands.