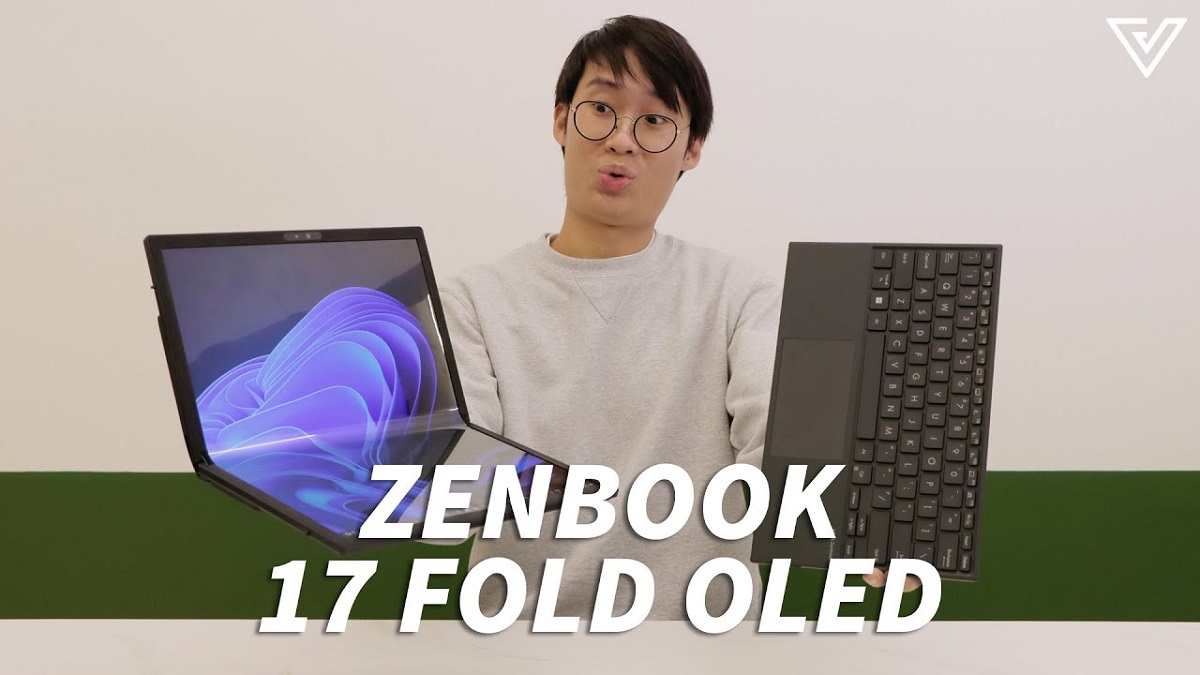 You’d be forgiven for staring a little too long at someone who’s using the ASUS Zenbook 17 Fold OLED.

With a 17.3-inch touchscreen display with an 87% screen-to-body ratio, it looks like an oversized foldable phone.

The laptop’s thickness is measured at 8.7mm when unfolded, and it weighs 1.5kg. It comes with a detachable ultraslim ErgoSense bluetooth keyboard.

Here are a few of its main features.

Feature #1: A decent processor for work, gaming, and creative needs

Our video team also felt that it handled creative workloads well, such as video editing, photo editing, and 3D modelling.

This Zenbook 17 Fold’s folding mode is quite versatile, with five uses in total. Other than using it as a huge tablet, you can also go into reader mode for reading ebooks and documents.

When combined with the ErgoSense bluetooth keyboard, it can be used in extended mode or desktop mode, where it’s a little more comfortable to type on.

There’s also the option of snapping the keyboard onto the Zenbook 17 Fold and using it in laptop mode, where it takes up less space, in exchange for a smaller screen size of 12.5 inches.

And no, the crease isn’t as noticeable as you might think. It really depends on how the screen is angled.

Just like the Zenbook Pro 14 Duo OLED we reviewed previously, the 17 Fold also has features that could make multitasking more convenient, like ScreenXpert 3 and GlideX.

Besides letting you organise your windows, ScreenXpert 3 supports several functions like muting your microphone, taking a screenshot, or locking the screen’s orientation.

Feature #4: Privacy and durability aspects for working on the go

The Zenbook 17 Fold has AdaptiveLock, which automatically locks your laptop while you’re away, and unlocks it when you’re back.

It also helps preserve battery life because it dims the screen when you’re not actively looking.

In the MyASUS app, there’s an AI noise-cancelling technology called ClearVoice Mic. Their website showcases a promising result, so we put it to the test ourselves.

We could confirm that it was able to dampen the noises of a vacuum and aggressive mechanical keyboard clacking just behind the speaker, and their voice still came through quite clearly.

The Zenbook 17 Fold is MIL-STD 810H certified, and its hinge has been rigorously tested to withstand up to 30,000 fold cycles.

As for the battery life, it is able to last up to nine hours on a single charge while the keyboard can go for much longer, up to 24 hours.

When the time comes to top up their batteries, they both can be charged using the Type-C cable provided. Unfortunately, though, the keyboard doesn’t support wireless charging while it’s attached to the Zenbook 17 Fold.

And now we come to the cons

The design of the Zenbook 17 Fold may look portable, but surprisingly, it’s quite heavy to carry around even if it’s in its signature case.

Since it looks like a tablet too, it’s natural to expect that it would have stylus support. However, using a stylus is not recommended as it might damage the soft foldable display.

As this is one of ASUS’s first foldable laptops, some features and functions may appear glitchy. One example would be the auto-orientation, whereby it can take a while to change from tablet mode to laptop mode, and sometimes, we need to attempt it multiple times.

Not many people for now, we’d gather, though adding stylus support in the future would make it a more usable device for those in creative fields.