Safer Internet Day 2015 Commemorates The Good Singaporeans Of The Internet 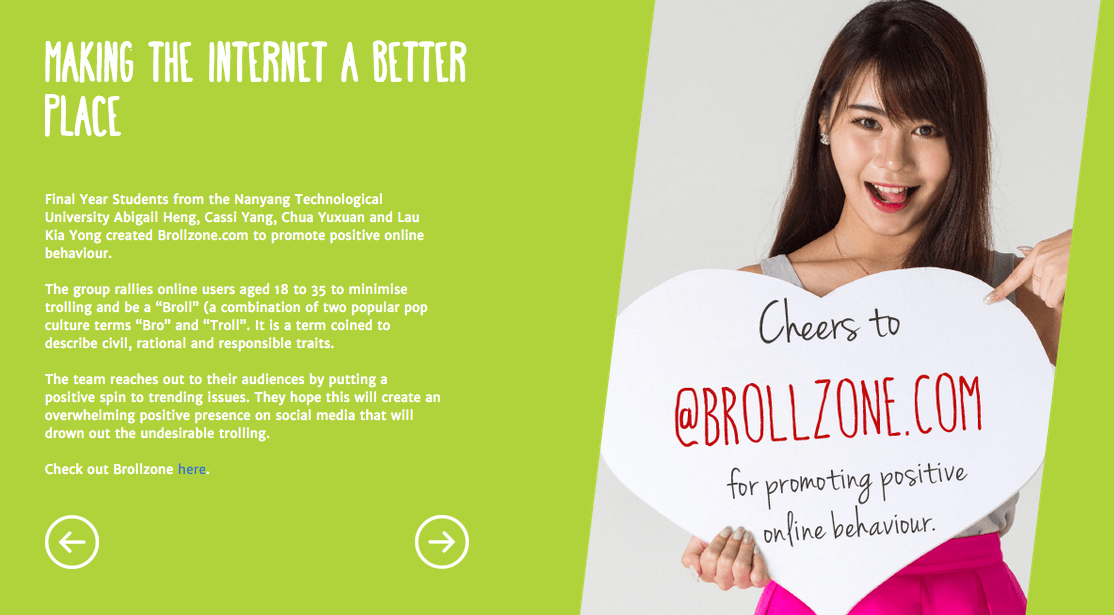 The Media Literary Council in Singapore has declared today Safer Internet Day. Held every year on the second Tuesday of February, this commemorative day began in 2013 to promote safer online practices in the country.

This year, the MLC is trying to recognize the good on the Internet. They have found 50 special people and groups that embody the spirit of a better Internet: some are vocal advocates of Internet courtesy and safety, while others are online movements that aim to make the Internet — and Singapore — a better place.

We’ve picked out some of the most interesting projects selected by the MLC, as well as some local movements they have missed out, to show you the movements behind the better Internet we experience today.

The Singapore Glove Project is an online group dedicated to gathering people to keep Singapore clean, while being active. The group organizes fortnightly outings to different parts of Singapore for participants to jog, walk, or run, and pick up litter along the way.

It was founded by Tan Ken Jin, who wanted to reverse the stigma associated with litter-picking by making it a community activity, where people passionate about preserving their home could reach out to others with the same mindset.

Ken Jin explained, “Let’s be mindful of how we wish to portray our message. Use simple, clear and proper English to prevent people from finding fault with our messaging, and if that happens, engage them as our most difficult customers — they could in time become our most loyal supporters.”

Red Sports is a community news website founded by Mr Leslie Tan. It is a platform for athletes to nurture the local sporting culture, allowing them to read the latest news in games and sporting events, and even share their own experiences, stories, and pictures to the website.

Leslie said, “The Internet has democratized the means of production. With a laptop, camera, access to electricity and Wi-Fi, one man sitting at home can potentially reach as many people as a newspaper journalist now. Do what you believe will make a difference to someone out there. Then keep going. Along the way, you will meet people who will share your mission and help you.”

3. The People Of Singapore

The People of Singapore is a photography project centred around bringing the stories of people living in Singapore to the rest of Singapore. It inspires, informs, and prompts thoughts surrounding the concept of identity, and what truly makes us ‘Singaporean’.

It’s a spin-off from the original Humans of New York, and since everyone can access it via its online platform, it allows Singaporeans to connect to the local spirit and culture whether they’re in Singapore or far from home.

Keeping Hope Alive is an online community that encourages members of the public to take on projects to help the less fortunate, and bring them a better quality of life.

It was started by Fion Phua 8 years ago as a personal project, where she went around knocking on doors of families staying in one or two room flats to see if they needed help or support. Since then, she has influenced many other people, and uses Facebook as a platform to gather like-minded people and share ideas about ways to help the less fortunate.

To date, the group has conducted door-to-door visits to 1 and 2 room HDB flats to identify their needs, and taken steps to improve their lives. They have provided for families unable to pay for overdue bills, school children’s bus fares, helped buy groceries, and refurbished bug-infested homes.

The Hidden Good is an online movement that aims to spread positive thinking and community spirit across Singapore. Started by Leon Heng and Rovik Jeremiah Robert in 2013, the duo began by showing the good in society and bringing it to Singaporeans through videos.

Since then, an online community has grown around the movement, inspired by their videos and projects to take action and look out for kind acts in their own communities, making sure that they don’t go unnoticed.

“Being responsible on the Internet means taking ownership for any statements you might make — which means owning the fact that what you write has the potential to hurt or inspire someone else. The Internet is such a powerful tool, but we have to use it constructively and wisely,” explained Wu Jiezhen, the Director of THG.

A Broll is defined as “that bro who always has your back online. He likes frequently, shares great deals, and always comments sensibly” — basically the opposite of what an online troll is. It advocates Broll acts, such as sharing posts responsibly, leaving responsible and positive comments, and choosing to make friends rather than enemies online.

It also allows people to acknowledge brolls on the Internet, placing a positive spin on current affairs and looking at the brighter side of the online world.

A Packet Of Rice is an online community project aimed at bringing Singaporeans together to distribute food to needy senior citizens. While it began as a small-scale project to help the needy in Jalan Bukit Merah, APOR has now expanded to organizing activities and rejuvenating old homes.

They operate solely through their Facebook page to grow their community and share their activities with other Singaporeans.

Although Singapore is a developed and advanced first world country, it does have a population of poor people that most people don’t know about. Singapore Against Poverty is a Facebook group that aims to alert people to the fact that there are less fortunate people who are struggling in Singapore, and to gather people to understand the hardship they go through.

Their most notable campaign is the $5 a day movement, where people take up the challenge to feed themselves with $5 a day — a struggle that people living in poverty in Singapore have to deal with on a day-to-day basis.

Yet another spinoff from the popular Humans Of New York, Cats Of Singapore seeks to bring cat lovers and Singaporeans together in a hilarious and amusing celebration of the cat community in Singapore.

Apart from amusing Singaporeans, it also helps raise awareness for cat welfare, supporting adoption drives, and reminding people that if these cats had a voice, they would undoubtedly speak in Singlish too.

People We Remember is a website that curates and collects stories of people in Singapore we remember, miss, and love. It tells the heartfelt stories of the people that have left us, reminding us of the raw love that all Singaporeans feel and helping us relate to the people around us.

While this website hasn’t been operational for a while, it is still a beautifully curated collection of stories that are, in their own way, uniquely Singaporean.

Why didn’t Singapore include Malaysia in its list of Vaccinated Travel Lane countries?