What Colour Is This Dress? What Is Going On? Is THIS The Answer? 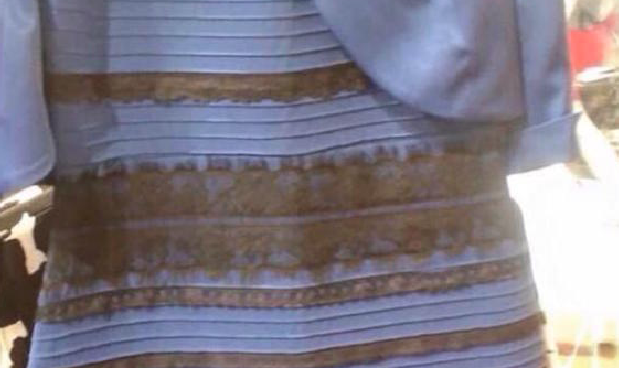 The people of the internet have gone in a frenzy, because they can’t agree on the colour of this dress.

When I had first seen this picture, I had thought it was a big practical joke that I didn’t understand. It looks black and blue. Photoshop eyedropper says its black and blue. But while half of the Vulcan Post team see this dress as Black and Blue, the other half insists that this dress is white and gold.

What is going on?!

Some people even insist that the colour seems to change, from white and gold on their phone to black and blue on their desktop.

A commenter on Sploid have also taken the liberty of scouting out a dress that looks very similar to this dress, in a black and blue colour. To me, that looks like the exact same dress.

I even put it through photoshop eyedropper and found it blue in every respect.

People are getting very agitated and even emotional over this debate. Perhaps its because we can’t explain this strange phenomena. Perhaps its because we are uncomfortable with the idea that our senses may not be as reliable as they seem. Perhaps we can’t reconcile with the idea that the world as we know it could be very different from the way we percieve it. Is blue really blue? Is black really black?

And why is this happening now, over a dress in very bad lighting?

UPDATE: A new picture has come up, with a very bright filter. Some people who say that the dress is black and blue is now white and gold.

The picture was taken by a post production supervisor in Los Angeles by Buzzfeed, who said that since the photo was taken with a camera phone in poor lighting, it casts the whites in a blue tone and mutes the gold to a darker color.

Therefore, people who see blue and black are seeing the photo at face value. People who see gold and white are compensating to the photo’s lighting and aesthetic.

UPDATE: Someone on Tumblr has finally provided us with what could be a viable answer for this mystery.

“Your eyes have retinas, the things that let you interpret color. There’s rods, round things, and cones that stick out. The “cones” see color. The “rods” see shade, like black, white and grey. Cones only work when enough light passes through. So while I see the fabric as white, someone else may see it as blue because my cones aren’t responding to the dim lighting. My rods see it as a shade (white). There’s three cones, small, medium and large. They are blue sensitive, green sensitive, and red sensitive.
As for the black bit (which I see as gold), it’s called additive mixing. Blue, green and red are the main colors for additive mixing. This is where it gets really tricky. Subtractive mixing, such as with paint, means the more colors you add the murkier it gets until it’s black. ADDITIVE mixing, when you add the three colors eyes see best, red, green and blue, (not to be confused with primary colors red, blue and yellow) it makes pure white.

—Blue and Black: In conclusion, your retina’s cones are more high functioning, and this results in your eyes doing subtractive mixing.

—White and Gold: our eyes don’t work well in dim light so our retinas rods see white, and this makes them less light sensitive, causing additive mixing, (that of green and red), to make gold.

**Also if you see white and gold sometimes, blue and black another, or a combination of the two, your eyes are very average, and it could change because of YOUR rooms lighting or the tilt of your phone. This is the same manipulation they use for optical illusions”

Zilingo COO resigns, the latest in the troubled startup’s string of high-profiles departures