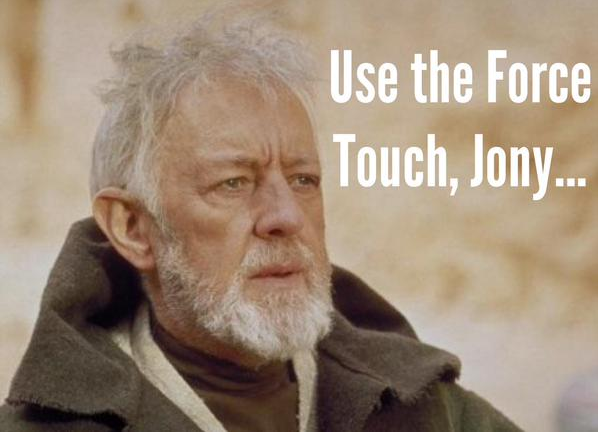 If you haven’t heard, one of the new innovations lined up by Apple last night was the Force Touch trackpad. It features haptic feedback and ‘force sensors’ at all four corners, allowing you to click anywhere on the touchpad. And if that isn’t impressive enough, there’s also the ‘Force Click’, which allows you to trigger different actions depending on how much pressure you apply. You can control fast-forwarding of a movie in Quicktime, for instance, through your click force.

Yes, the Force Touch trackpad sounds awesome — but some people are getting distracted by its absurd name, and I don’t blame them.

People were quick to point out the creepy connotations of the name, especially seeing as it came right after International Women’s Day. You can see eyebrows getting raised on social media as light slowly dawns:

Once the implications of “force-touching” caught on, people started to get creative:

No means no! #Apple #ForceTouch

ForceTouch is the worst name for a piece of technology ever. Sounds like Jedi sexual harassment #AppleWatchEvent

Jokes aside, though, the fact that the entirety of Apple’s marketing department failed to notice the sexual harassment-type connotations of the name seems more disturbing than comical. Some are dismissing these “social media feminists” for being too touchy (no pun intended), and there’s no doubt that the darker undertones of “Force Touch” were unintentional. But it’s still worth considering whether this branding faux pas is a symptom — however tangential — of a culture where, in spite of countless movements and advancements for gender equality, expectations of feminine passivity and masculine aggressiveness persist.

We might also consider Apple’s diversity data in August last year, which showed that only 20% of its tech workers are female. Other tech giants such as Google and Yahoo! aren’t exactly doing much better.

Yes, the name shouldn’t detract from Apple’s admittedly impressive new touchpad, and the discussion around #ForceTouch is definitely more hilarious than significant. Still, for some brave women out there, this might not be the case.

@getwired I didn't wake up thinking I would have domestic violence flashbacks to men talking about #ForceTouch like it's a good thing.