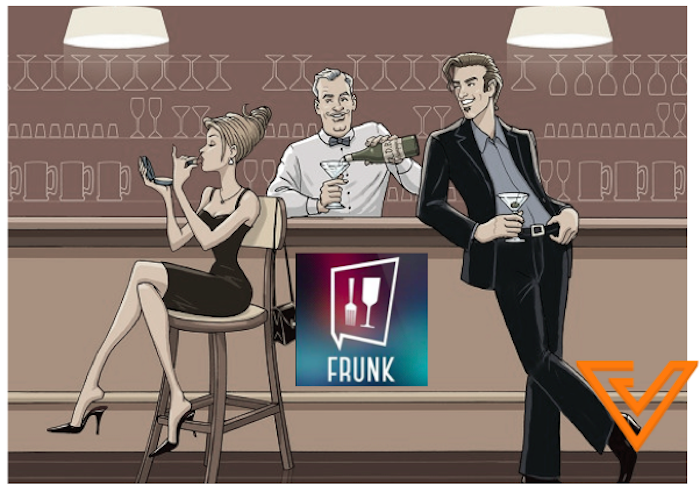 Have you ever been in a situation at the bar where the guy/girl at the table next to you looks really cute, and you wish you could buy them a drink without all the accompanying social awkwardness? I mean, what if he or she rejects your offer publicly?

Approaching someone new in a bar can be a daunting task for many Singaporeans. Because of this, most of us stick with the friends we came with. But with Frunk, this might change forever.

You might remember Frunk, a Singapore mobile app startup which we covered back in November and which was nominated in our annual Readers’ Choice Awards last year. The app leverages on iBeacon technology, allowing customers to view restaurant menus and make decisions about their orders while still in the queue and/or travelling down. The moment they are seated at their tables, all they need to do is tap their phones to the sticker on the table and their order will be sent instantly to the merchant.

Now, to add on to that, Frunk has released an all new social feature, where users can see who’s around and privately send drinks to one another in the same bar/pub. All you need to do is place a drink order on the Frunk app (where drinks also come at a discounted price), and the service staff will deliver the order for you to the table you want.

Beavan, founder of Frunk, told Vulcan Post that “When we talk to bar owners around Singapore, we realized that one of the things that would benefit them is if we help them get more return visits. We added this new feature so that when customers come and visit Frunk-enabled bars, there’s this social element allowing customers to interact with one another. We think this is really useful for bars.”

If you are lucky enough to receive a drink from another customer through Frunk, you can also see who’s the one buying you the drink through the app. There’s an option for you to reciprocate and return a drink. Currently, Frunk is available at Prince of Wales Boat Quay and Prince of Wales Little India, and the app received 500-600 downloads over the week when the new feature was launched.

So while Frunk removes the social awkwardness that comes with potential rejection, if the person you bought the drink for accepts the drink and looks flattered, it probably means that you should go ahead and have a face to face conversation with him or her.

The question, of course, is whether this feature will work in Singapore, where we’re notoriously shy and unadventurous. And while we definitely hope so, one of the biggest challenges that Frunk faces is to actually get customers to download the app and use it. That said, what’s undeniable for sure is that Frunk has offered us a less scary way to approach that cute guy or girl at the next table.