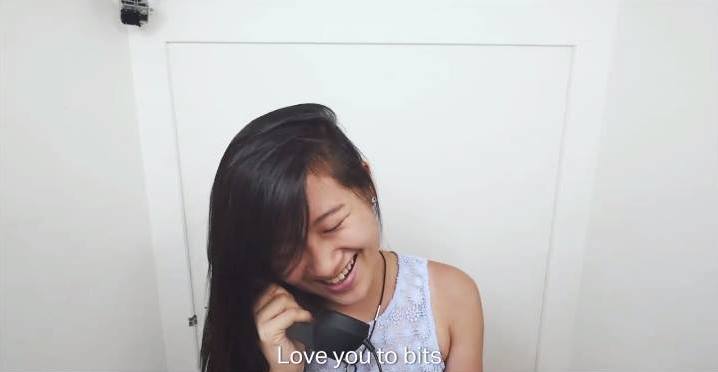 With Mother’s Day coming up in three days’ time, it’s the season to reflect on how much care and love our mothers have lavished on us, as well as to express our gratitude in return. And besides “thank you”, this Mother’s Day video by Jurong Point Shopping Centre reminds us of another three little words to tell our mums: “I love you”.

The video, titled ‘Watch What Happens When We Say, “I Love You” To Our Mums!“‘, is currently going viral on Facebook in Singapore,with more than 100k views amassed in less than a day so far. And given the rare, moving expressions of affection so candidly portrayed in this video, it’s not hard to see why.

In order to get shoppers to give their mothers a surprise call, Jurong Point Shopping Centre set up dressing-room-sized booths complete with a telephone. Singaporeans of all ages — some sheepish, some in tears — went into these booths to call their mums on the spot to express their appreciation. The resultant video is funny, heartwarming and thought-provoking all at once. Warning: tissues recommended.

When unexpectedly told “Thank you” or “I love you” by their children, many of the mothers on the other end of the line were plainly surprised, as this guy’s mum was:

As was this guy’s mother:

Once the initial awkwardness wore off, though, the calls turned sweet and poignantly heartfelt, with some moved to tears:

The essence of the video, Jurong Point Shopping Centre said, is this: “We asked if there were words they wanted to say, but never did.”

It often seems simple, and yet somehow so difficult, to express our sincere gratitude to the amazing mothers who’ve been taking care of us since birth.  This Mother’s Day video might just be the push we need to do so in real life. Most of all, it reminds us that it shouldn’t be a surprise when we tell our mothers how much we love them, and to do so the other 364 days of the year — just as being a mother is a full-time, tireless commitment that never ends.