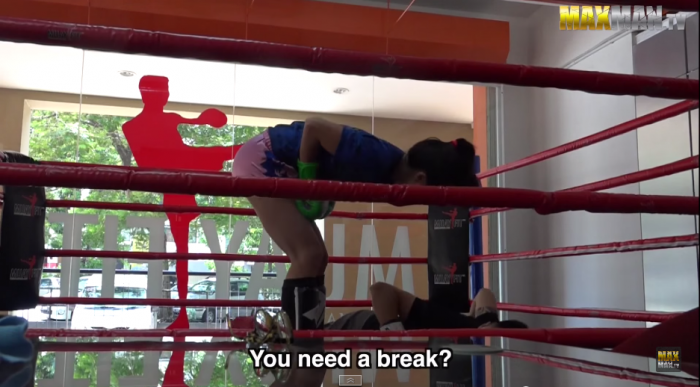 So, how would a bunch of professional Muay Thai fighters respond when they sees a slender, nerdy, Asian woman walk into the gym? They probably would stare at her and wonder why on earth she’s at the gym and why she’s just touching the kick bag instead of kicking it.

And what would they do if the fragile woman walks up to them and asks them to teach her how to spar?

That’s what one of the trainers said.

Well, that’s what I would have said as well. I mean, don’t get me wrong; I have absolutely no problem with breaking a woman’s heart (Apparently, what doesn’t kill you makes you stronger?), but physically hurting her? That’s a whole different ball game. Matter of fact, it’s an automatic jail sentence, even if you were just “defending” yourself.

Nonetheless, the “brave” trainer entered the ring with the girl and kept begging the girl to punch him. Occasionally, he told her that she shouldn’t be scared. And then, he proceeded to jab her with his fist.

I guess he was just trying to live out a few of his repressed fantasies.

A few punches to the face and after falling down a couple of times, she lets the trainer know that she needs a break. And that’s when the craziness starts.

She had a sip of water and she became possessed by a Viking spirit from the warrior clan who endowed her with an instant ability to kick ass! She threw punch after punch and defeated her evil trainers and she thanked the spirit for helping her out.

Well, that never happened, in case you didn’t know.

What did happen is that she gave them a beat down that they’d remember. Turns out, she’s an undercover fighter who has been training for the past 6 years. She also represents Malaysia in the international fight arena.

And now, she can add being a prankster to her list of achievements.

A local gym thought it would be hilarious to prank their new Muay Thai trainers, and so they reached out to maxman tv who dressed Germaine Yeap as the slender and harmless, Asian nerd who just wants to “learn” how to spar.

Check out the video to see how the prank turned out.

After watching the video, I had a deep sense of sorrow for all the men that got a beat down. But then, again, I took comfort in knowing that this is prank and in a “real-life” scenario, they would be able to defend themselves better.

No, they wouldn’t! Germaine is awesome!

What do you think of the video?