The LG G4 Leather Isn’t Kinky, But It’s As Hot As You’d Imagine 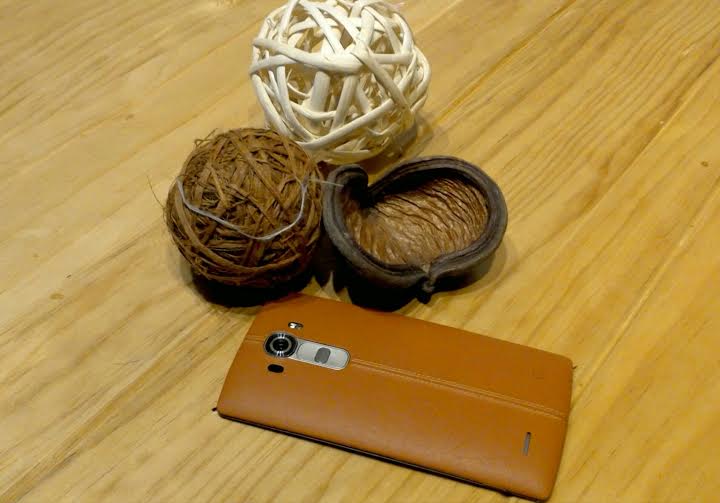 I must admit that I experienced a moment of doubt – and no small amount of amusement – when I heard that LG’s newest flagship model came in leather-clad versions. Courtesy of Fifty Shades of Grey, dominatrix-type images sprang up (hey don’t judge, you know your mind headed that way too).

Well, the genuine, handcrafted leather that stretches across the LG G4’s back cover may not come in shades of grey, but the three available colours of black, brown and red are still sexy enough to fit the bill. Apart from its incredible camera, the biggest innovations that LG’s latest model boasts are all about design – and it delivers well on that front. The tan leather review unit that I managed to lay my hands on had a pleasantly rich tint, putting me in mind of horse saddles, earthy loam and warm-hued things. Certainly, no metal chassis can do that.

Design-wise, the G4’s screen curves imperceptibly. This feature, LG claims, makes it 20% more likely to survive face-down drops as compared to a flat smartphone. While I had no occasion to test out this claim, the slight curve does make it easier to grip – a minor compensation for the large screen, which is taller than the G3 and makes one-handed use difficult.

Long-time LG users will find the G4’s rear-mounted power key and volume buttons pleasantly familiar – it’s one of the distinctive features of LG phones. It’s not what I’d consider a plus on the G4’s otherwise faultless design, and I suspect those accustomed to side-mounted buttons might find these a chore to get used to. Nevertheless, since double-tapping on the display can easily wake the phone, the rear buttons are never anything more than a mild annoyance.

The removable backplate is a feature that many of us might appreciate – both Samsung’s Galaxy S6 and HTC’s One M9 have done away with this trait, and that’s a pity in my opinion. A removable backplate means replaceable batteries, which is great for those of us who carry around spare battery packs – especially considering that LG is offering us a complimentary LG G4 battery and battery charger with each G4. It’s also clear that LG put thought into ensuring that the removable back cover doesn’t lose them design points. Once affixed, the back cover is practically seamless with the phone body.

There’s little to complain about in terms of the G4’s display. LG has a history of impressive screens behind it, and this model doesn’t disappoint in the least. With an IPS Quantum Display, colours pop beautifully on the G4. It’s theoretically not as sharp as the QHD Super AMOLED display on Samsung’s Galaxy S6, but that hardly matters when it’s capable of producing such vivid hues. The screen resolution, similar to most flagships on the market, packs a punch at 2560 x 1440.

Since leather traps heat better than metal, I was curious to find out if the G4 would get uncomfortably warm after prolonged use. The short answer, in my experience so far, is that it doesn’t. That might be due to the fact that the leather layer has been thinned to within an inch of its life.  This means it doesn’t have quite the same luxurious feel as a good leather wallet or bag would have, and makes me wonder whether the veneer might not prove so resilient with age. It’s not exactly scratch-resistant, either, so those with long fingernails will find that it’s dangerously easy to leave marks on the leather. But it retains enough organic softness to its contours that it still oozes appeal.

LG’s decision to go with Snapdragon 808 for the chipset, a processor that’s theoretically weaker than the Snapdragon 810, may also have contributed to the low heat output of the G4. The HTC One M9, which I had the chance to try out earlier this year, never overheated as badly as some reviews claimed in my experience, but the metal body often got uncomfortably warm.

Also Read
The HTC One M9 Is Finally In Singapore: It’s Good, But Is It Good Enough?

The overall performance of the G4’s Snapdragon 808 processor so far proves that LG might have made the right choice. In my experience thus far, the reputation of the 808 for having fewer heat issues holds true, and the smartphone isn’t perceptibly any less responsive for it.  Apps run fluidly, and the whole performance is generally worthy of a high-end flagship without betraying any hint of exertion. Which is a point in its favour – while the leather look is certainly hot, no one wants a phone that literally heats up when put to the test.

LG has put in effort to play up a human-centric focus for the G4’s user interface, making it the smartphone a disconcerting blend of sexy and endearingly naggy. Well, just this one feature, to be fair – the daily weather forecasts provided by LG’s improved Smart Notice come complete with personalized admonishments on the appropriate precautions to take for the day, such as “Stay hydrated.”

One personalization feature that I find particularly appealing is Smart Settings, which draws on context to trigger an action. For example, you can choose to have the phone open Music automatically when you plug in your earphones, or turn on Wi-Fi when you step out of the house. While these personalized features aren’t unique – HTC’s BlinkFeed, for one, serves many of the same purposes as LG’s Smart Notice – they go a long way toward making the G4 a leather-clad friend in your pocket.

While less impressive than other flagship models in the market on paper, the LG G4 is more than a match for its competitors in actual performance, even before considering the incredible camera it boasts. It’s fast, functional and a sharp dresser to boot – whether it edges Samsung’s S6 out for smartphone of the year is only a matter of opinion. If you’re looking for a phone which both looks and performs with style, LG’s newest flagship is definitely well worth the investment. And yes, by all means splurge that little extra on the version rigged out in leather.

For those who’re interested, here’s the full spec sheet: