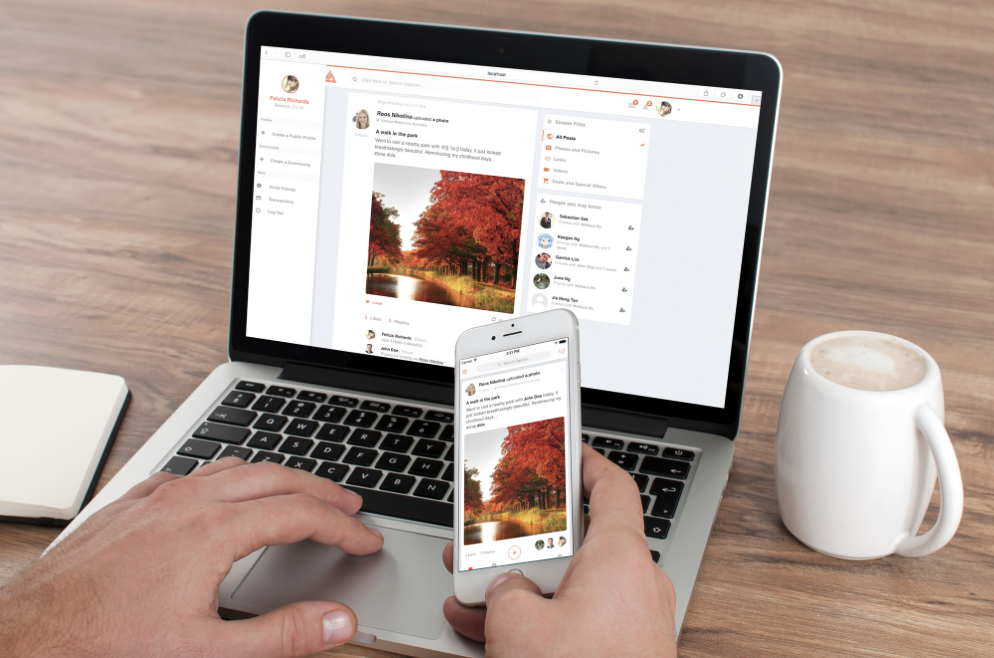 Despite behemoths such as Facebook, Twitter and Instagram dominating the social network space, Gaption is a new social network that’s looking to change things up in Malaysia.

Gaption is a social network that’s infused with the element of e-commerce in its DNA. The premise is that individuals, entrepreneurs and SMEs can share updates, pictures and links of whatever they like just like any other social network but the difference being that one can monetise their time spent on Gaption by sharing products or services as posts rather than ads.

There are no upfront costs for setting up on Gaption and you won’t be charged any additional advertising fees. You will only be charge a minimal fee for successful transactions and the users that helped spread the news on Gaption will be rewarded with credit that can either choose to withdraw as cash or spend on other services.

Essentially, the idea is that if you share posts about a particular product and someone decides to purchase it on Gaption, you will be remunerated by Gaption (not the merchant).

While there is a monetary incentive, it’s still a social network and you can do almost everything on Gaption as you can on say, Facebook.

The platform also has the option that allows anyone to make a purchase right from the news stream. You could pay for products using PayPal, credit card or Stripe.

The Team Who Wants To Share Revenue With You

The three co-founders are working along with David Saw (iOS Developer) and Keegan Ng (Android Developer) to create a fun and valuable experience for Gaption’s community of users.

Also Read
Petsodia: The Airbnb-Like Platform That Provides Your Pets With A Home Away From Home

Their aim was to create an environment that empowers social activity through strong and meaningful relationships within the online space. They wanted to achieve that by sharing their revenue with users every time they assist in the sale of products and services.

“What we intend to do is to offer a different sort of experience for people to connect, share, and discover content, while being able to gain rewards in the process of doing so. Plus, many people have been trying to sell products over existing social networks, though it hasn’t taken off significantly. We think we can offer a simple, fun, and safe environment for our users to sell their products effectively to their fans,” the team shared.

A common misconception that people might have towards Gaption is that it’s a social network that pays you to post and share—which is not the case. They only share their revenue that’s generated from users’ activity.

Gaption is currently available for use on the iPhone and they are working on rolling out a version for Android within the next 3 months. Since the app is available on the App Store, I decided to give it a try.

You really shouldn’t have trouble figuring your way around the app, especially if you frequently use other social networking apps. The app has a news feed that displays what other people are up to and you can choose to filter your news feed based on your preference. You may choose to selectively view only pictures, videos or links.

From the time that I’ve spent on the app, I’ve noticed that the news feed displays content even from people that you’re not following. This may not be a problem now, as there aren’t many users on Gaption but I do feel that it would become quite clumsy once it increases in number.

I faced a similar issue when I was on another social networking app called Vent. It was fun at first as I got to see what other strangers are going through but once it grew in size—and it did dramatically—it just became a pain to keep up with everybody.

While you may have no problem figuring out how to message a person or how to check out their profile, I did struggle a bit to comprehend the e-commerce component.

After scrolling through the app, I did run into someone’s post about a dress and it had a purchase button attached to it. I did click it with the intent of making a purchase but I stopped immediately after realising that I could be making money for someone else—that’s not what I’m all about.

While Gaption still needs to figure out a few inner chunks to ensure that users have a good time on Gaption, I’d still give them a 4 star rating for being creative and for being generous enough to reward users that participate in the sale of products.

Though I do wonder about how the user experience would be once (and if) the app does gain traction. Would it be a scenario where all you see are posts of people trying to sell you a pair of shoes? Or would there be a limit as to the number of advertorial posts a person can share on the platform to control the spam?

To test out the app for yourself and see if you can earn a bit of moolah, download it from the App store here.