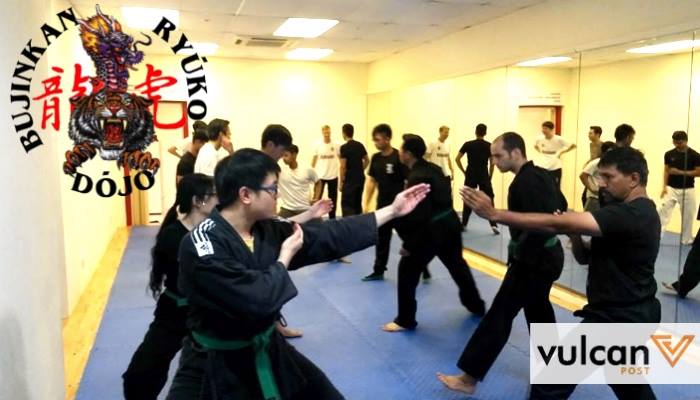 When it comes to the wide, wide world of martial arts, it can often be tough for the layman to differentiate between the various schools and types of practices. Most of us can name a number of commonly-practiced ones at the drop of a hat, but how many have actually heard of Ninjutsu?

In this interview, I speak with Nachum Kaplan, head instructor and co-owner of Singapore Ninjutsu, a school which is part of the legendary Bujinkan Ryuko Dojo.

What makes Ninjutsu a unique sport compared to other martial arts?

Ninjutsu is different from other sports precisely because it is not a sport. Most martial arts today are sports or cultural artefacts. We are a collection of authentic ninja and samurai warrior arts straight from feudal Japan. It’s the real deal. There are no sporting or competitive influences in our training. None.

How did you begin exploring Ninjutsu?

I tried many martial arts as a teenager, but Ninjutsu was different and left me awestruck. It was ruthlessly efficient and devastatingly effective, yet it had this emphasis on personal development.

I did it only for a short while but it had a lasting impact on me — so much so that I took it up again as an adult — under an amazing instructor and martial artist, and even better friend in the UK named Keith Porter. I never looked back. I travel to Japan to train with the grandmaster whenever I can, which is a nice thing about being in this time zone.

The dojo is a serious place but we do have fun. www.singaporeninjutsu.com

What attracts you to the sport?

Its authenticity. Ninjutsu is a vibrant, living art of great sophistication, depth and intelligence. It hasn’t been watered down or turned into something different. Ninjutsu is a set of skills to help you survive, so it’s broad in scope. Our self defence skills are second to none, but we learn how to protect our minds and our spirit too. There is just so much going on in the movement, so many subtle things that it is closer to art than pugilism — even when we’re fighting.
I work as a financial journalist so it’s not right to call Ninjutsu my career, but I love to train, to share and to explore the art with others and to help other people and watch them develop.

What is a common misconception about the sport?

People think we are running around in masks like ninjas from the movies. That’s not Ninjutsu, and those Ninjutsu skills are a tiny part of the art. It does make for some funny conversations. I have had people ask me if I can make myself invisible, or leap from rooftop to rooftop. Alas, I cannot. But there are lots of really cool things that I can do and show you how to do, too.

People have started calling me the Singapore Ninja, which is a good marketing line, but there are no ninjas anymore, just people who practice the art of Ninjutsu. Ninjutsu means the “art of perseverance” or the “art of endurance” and that is what we do. We just keep going. It might sound a bit stoic but it’s a very powerful philosophy.

What do you think more people need to know about this sport?

Ninjutsu is unlike anything you’ve experienced before. Yes, you learn to defend yourself, but it makes you stronger in so many ways and makes you more effective in all parts of your life. Ninjutsu specialises in unorthodox fighting techniques, and that means you learn how to think and react differently, and to find ways out of difficult situations — whether it be a dealing with a mugger in an alley, or negotiating your way through office politics. It changes the way you look at things.

What’s your advice for someone who wants to begin Ninjutsu?

Ninjutsu will give you self-defence skills, help you get fit, make you stronger and boost your confidence, but it’s not magic. It won’t happen if you don’t train. But the best part is that the training is fun, and the dojo challenging and supportive in equal measure. All you need to do is turn up and train consistently. That’s it. You might get the odd bruise, but you will not get injured — anyone can learn Ninjutsu.

How would a Ninjutsu class typically go?

Every class is different, and that is one of the most amazing things about it. We start with some postures, basic punching and fundamental techniques that teach us how to move properly. After that, it might be defending yourself standing up, sitting down, with weapons, on the ground or even in water. It might be leaping, rolling or meditation. It might be how to escape or understand body language and intention.
It’s vast and while you might see certain things again and again, you’ll never experience the same lesson twice. That’s one reason it’s fun to learn. Another is that almost all the training exercises are done in pairs, so very little time is spent on repetitive solo training. Finally, because we are not a sport, there is no competitive influence in our training. That means your fellow students are there to help you learn and not to beat you or show that they are better than you. It’s just a great environment.
Nachum conducts his lessons at Singapore Ninjutsu at Telok Blangah Road.
This article is part 2 of a series in which I interview people who practice sports that are less mainstream, and debunk some common misconceptions people have about them.
Also Read
Longboard Girls Crew Singapore: Tricks, Falling, & The Power Of Friendship
Categories: Lifestyle, Luminary, Singaporean, Yahoo News