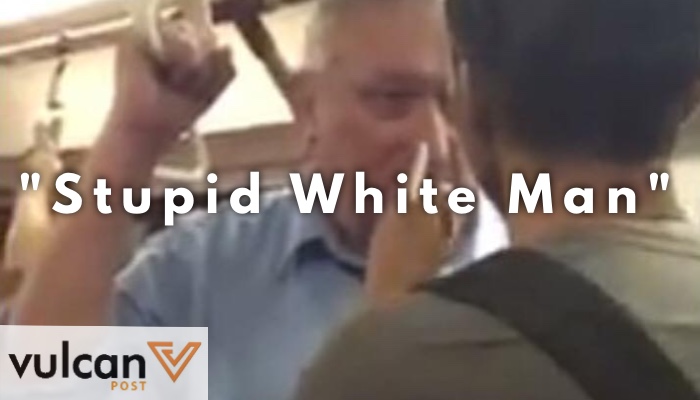 Another week, another public spat. The cause: a freaking t-shirt with words on it. When a teenager wore a shirt bearing the amazingly horrendous and outrageously offensive words “I’m F*cking Special” on the MRT, it incurred the wrath of a very grumpy and rude old man, which made for excellent taking-a-dump fodder.

If you needed a recap on what happened, here it is in video form. We thank thee Nabilah Nasser for the footage:

It’s like when you were a kid and the word ‘bosom’ made you giggle — it’s the same thing, but maybe with 100% more vitriol. The only fault of the old man was that he was rude as much as he was a prude. And that he was Caucasian. Boo for the bully here, because this incident comes after a long history of misbehaving and racist Caucasian men shamed on social media — he’s in the excellent company of Anton Casey, and the Aussie expat who punched jazz singer Dawn Ho when she stood up for a cab driver.

Yes, the man had no right to taunt the teenager, shout at him and even try to pick a fight with him, and the teen, bless him, remained stoic and unresponsive to shitty people like that — a feat hard to achieve in Singapore it seems.

But in its entirety and despite his shitty manners, the old man never said anything racist or race-related. Even when a buff lad — our hero of the moment — stood up and told the bully to keep his “f*cking mouth shut.” When the grumpy old man disembarked the train, there were shouts of “Go back to your country” (from an elderly voice even), and “F*ck off to your own country”.

The outspoken and brave young man was bestowed with the highest honours on social media, even placed alongside Lt. Adnan Saidi — who fought on at the Battle of Pasir Panjang till his death, refusing to surrender even if he was outnumbered — on a DIY infograph. Yes, both are brave men, but surely we are overreacting a little here.

Was what he did commendable? I say yes, because no one was saying anything throughout the entire awkward trip. All it took was one person’s confrontation to bring out the assemblage of stroppy locals. The whole spectacle was recorded on a phone, shared on social media widely, posted up on All Singapore Stuff with the caption “Lucky there is a Singaporean Malay abang who came to stop him! Stupid Ang Moh mind your own business!” Yes, real classy highlighting race once again, and with feeling.

When can we stop bringing in race when we’re hit with another viral public brawl? Maybe it is time for Singaporeans to learn to fight a little more gracefully — and remember to not bring race into it. To the person who shouted, “Go back to your own country!”: lady, you’re probably riding the train along with a lot of people who aren’t from ‘your own country’. As for All Singapore Stuff, why can’t someone stupid just be a ‘stupid man’ instead of ‘stupid ang moh’. To Terry Xu, we don’t need examples like Lt. Adnan Saidi and Elfy to prove a point that Malays can defend the country.

Is there really deepset racism in Singapore and would it hurt us to admit it? We’re all expected to brush aside asinine remarks about mocking “black” skin or hideously embracing racial stereotypes if a fellow Singaporean says them — because they’re all really just in good fun, aren’t they? Even if we’re aceing the test of putting up a facade of racial harmony, it all comes crumbling down the minute a minority race becomes labelled the “bad guy” — much worse if it’s a foreigner.

It’s become easy for us to repress deep-seated feelings but how long can we keep them buried? When will there be the time to reflect and realise that what we believe in could be wrong? Wrong not because an authority tells you so, but because you should already understand the concept of basic human decency as a fully-functioning adult.

Fight with grace, fight with reasoning and understanding, maybe even fight with wit. We could do with some witty banter on social media, or fine-tune the art of satire, instead of the usual mindless racist and ‘us versus them’ crap we have plenty of. After all, we have more pressing issues like what the next SG50 freebie/campaign/obvious attempt to cash in on national pride to worry about.

Also Read
This Optical Illusion Of MRT Tracks Is Causing A Buzz On Reddit Singapore — How Many Illusions Can You See?
Categories: News Reader, Opinions, Singaporean, Yahoo News