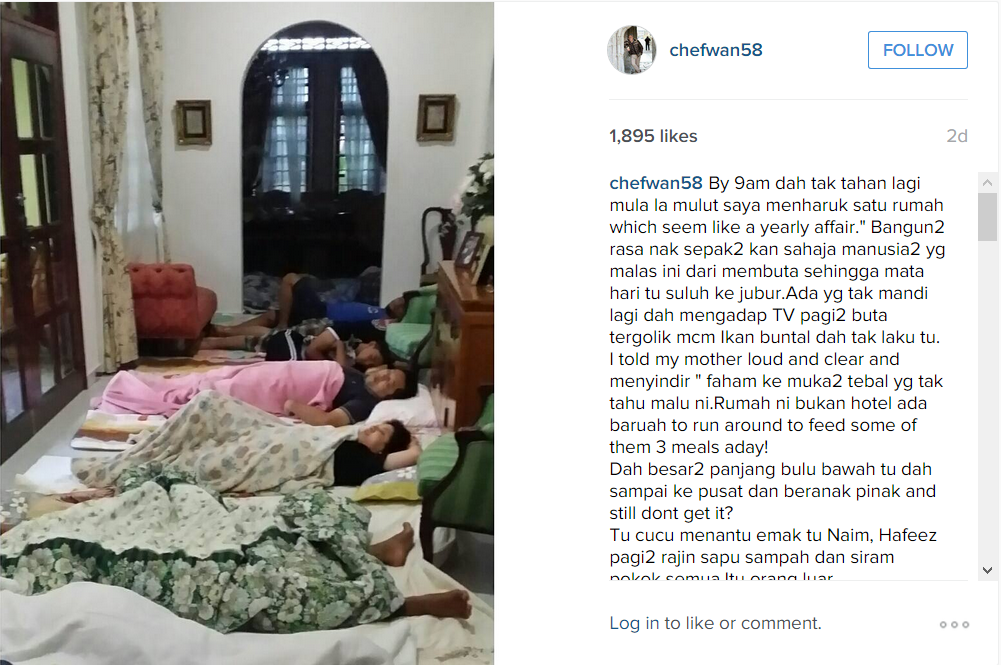 Even with the Raya spirit thick in the air, Malaysian celebrity chef, Chef Wan is not one to be taken advantage of.

2 days ago, Datuk Redzuawan Ismail, or also popularly known as Chef Wan, uploaded a picture on Instagram (@chefwan58) of some of his family members who were sleeping soundly in his living room during Hari Raya.

The picture came together with a long message whereby Chef Wan heavily criticised and scolded some of his family members who were still sleeping soundly at 9am in the morning during the festive season. The message was a heavy mix of two languages, Bahasa Malaysia and English.

Chef Wan lamented about how every year he has to deal with some family members who spend their days during Raya sleeping, watching TV and some even to the extent of not bathing. He said in BM that their house is not a hotel that serves to feed them 3 meals a day.

Furthermore, he also mentioned that the female members of the family—nieces, sisters and sisters in law—are hardworking, offering help in the kitchen whilst the males are being lazy.

“I am sure I am not the only one in Malaysia facing this issue with all this lazy and useless people. They are like parasite in our life.”

The message of the Instagram post was harsh and straightforward, proving that Chef Wan certainly has no issues with airing dirty linen in public—however, it does seem that this was his last resort to prove a point.

“Puas saya mengajar, berleter kan and show as an example dari kecil sampai ke tua!” he exclaimed, which loosely translates in English to mean that he has tried to teach and nagged at them from a young age till now.

The post has since gathered more than 1,800 likes and other than that, despite Chef Wan’s criticism towards his family members, some netizens have openly and strongly agreed with his statement.

“Pitiful, am I right? I was brought up in this kind of environment. Only the men can relax. From cooking to serving, and they even need someone to help them to wash their hands. Hence this is why we only sleep at 2 to 3am. Life is so unfair,” said Instagram user nadhjoha.

Another user nida.hafiz also showed her support by saying, “I agree with what @chefwan58 wrote, this is the same at my mother’s house. I cook from night to day, as for the youngsters, they are always busy with their gadgets.”

There are, however, some netizens who thought that uploading that picture on a social media platform is not appropriate as it is embarrassing for Chef Wan’s family members.

Although at first glance, it seems that Chef Wan is humiliating his family on a social media platform, the root of the problem runs deeper than that. He wrapped up his post by saying that the habit of being lazy, ‘tidak apa’ attitude, and idle loitering are becoming diseases amongst the Malay society these days.

His family members were just used as a fine example of that and his drastic actions only serve to show that he is at his wit’s end with dealing with these lazy and unproductive behaviour that is festering among us. After all, one does not reach to his level of national and international success just by lazing around the house.