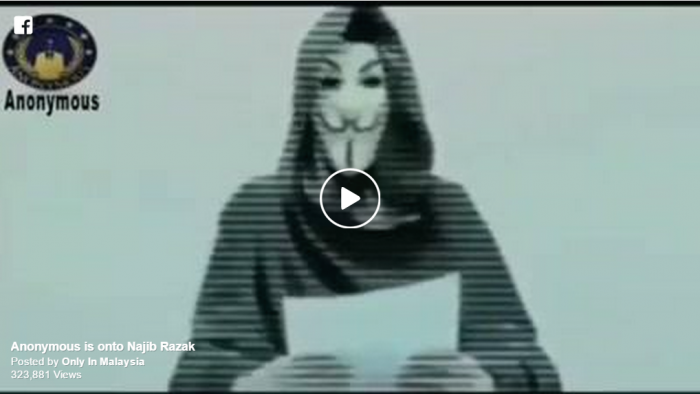 The video begins with the traditional trademark of Anonymous accompanied with their style of tension building music and the words, “We are Anonymous” and their cool tagline, “We Are Uniting Humanity”.

After the fiery introduction, the main cast of the video—an Anonymous representative who resembles the Grim Reaper that shares a deep love for Guy Fawkes masks and auto tune—begins his speech to the Prime Minister of Malaysia, Dato’ Sri Haji Mohammad Najib bin Tun Haji Abdul Razak.

The masked man calmly states that he’s a member of Anonymous Malaysia and that the group will be working alongside the International Arm of Anonymous and the citizens of Malaysia on a campaign with the moniker, Bersih 4.0 that will be held on from 29th to 30th of August at 2:30 pm.

“At this time, we will be launching Internet Warfare to the Malaysian Government which is believed to be the largest type of Internet assault in Malaysia’s history ever,” exclaimed the Anonymous representative.

He/she then goes on to explain that the group wants the Prime Minister to resign and accept the 1MDB investigation and they also want him to refrain from arresting the Sarawak reporter.

The Anonymous representative also goes on to explain the various crimes that the Prime Minister is allegedly involved in, like the murder of Shaariibuugiin Altantuyaa, the scandal of 1MDB Malaysia—the transfer of over 2 billion into his personal bank account, the sacking of Deputy Prime Minister Muhyiddin Yassin, and the conspiracy behing MH370, among others.

The representative went a step further to reiterate the disappointment and the frustration that was caused by the Prime Minister’s alleged behaviour and they feel that he should step down in response.

Bersih 4.0 will be used to attack targets 1MDB, Najib Razak portal, Malaysia SPRM, Royal Police Force PDRM and they have also collected an additional 150 websites to be the attacked within the next 48 hours after the 30th of August.

You can check out the full video here:

Whether the proposed attack will have any large effect on the status quo is still questionable and honestly I’m quite skeptical of whether Anonymous Malaysia will follow through with their threats. We will find out in about 3 weeks’ time.