The Gaming Industry Is Growing Old, Lazy And Boring? I Think Not. 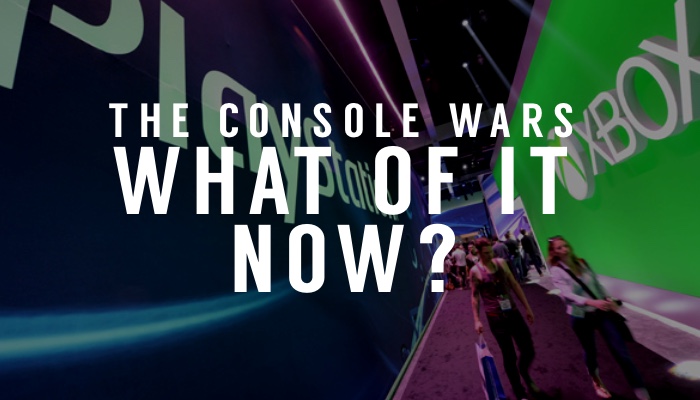 I still remember when my dad bought me an Xbox in 2002 — the very first one — and I thought, “Man, what a clunky piece of equipment, why can’t I get a Playstation?” The PS2, while equally clunky, was what everyone else had, but my dad was quite the Microsoft fanboy: While other kids began switching to colourful and seemingly cooler Apple computers over the years, we had to endure versions and versions of Windows OS growing up.

Besides the reckless amount of time I spent on gaming after school, I started paying attention to the friendly console war going on between Sony and Microsoft — two of the biggest names when it comes to gaming. As with all consoles, my Xbox’s expiry date loomed ahead and soon enough, became obsolete. I switched to PC gaming for a while, partly because new consoles were getting pricier. Yet, I felt the return to the console would happen eventually.

So I got the PS4. It was a no-brainer. Launched in 2013, it was hailed as “the world’s most powerful console” and came with a library of accompanying games exclusive to the PS4. It was one of the best life decisions I have made in the last five years. I think.

Developments In The Gaming World

Mario creator Shigeru Miyamoto said once, “The obvious objective of video games is to entertain people by surprising them with new experiences.” And in this day and age, this applies to more than just gameplay and graphics — technological advances in the last few years have brought gaming to a whole new level. The introduction of the Xbox all those years ago has kept Sony on their toes, and the rivalry between the two has led to some spectacular developments in the gaming industry.

When gaming entered the realm of the the “next generation”, it came with a tantalising selection of next-gen games. Enhanced graphics, open world landscapes, breaking the wall of the single/multi-player, life-like simulations — all of these have become the norm for games these days.

Spend days on The Witcher 3, and you’ll only find yourself completing Chapter 1. Watch the light play on the trees and the breeze catching in the hair of characters on The Last Of Us, play as a mega monster in Evolve while your friends try to hunt you down (and kill you) — people now are enthralled by gaming the same way other people love the cinema or theatre; it’s become a storytelling form.

The PS4 and Xbox One have embraced this fully with a couple of exclusive titles under each of their belts. Fans of the Halo franchise and racing series Forza, for example, will always return to the Xbox, while PlayStation continues to keep their share of the market with series like Unchartered and Infamous, the stunning No Man’s Sky, and Bloodborne, amongst others.

In support of independent game developers, Sony has also published a couple of indie breakout titles on its platform, including the recently raved-about Everybody’s Gone to The Rapture, an immersive and exploratory game. It’s no surprise why the game got the reception it did: beyond just great graphics, a next-gen game should bring something completely new to the table — a compelling story, different rules, something that will surprise.

Though 2015 saw very few major releases, market research company NPD Group recently released a video game industry report, which revealed that the industry is still growing and that the information was a “small sample of a larger and more dynamic industry.”

The Introduction Of Apps

The PS4 and Xbox One have proven so far to be more than just gaming machines; all next-gen gamers now have access to a variety of apps on their consoles. PS4 has Spotify, Amazon, YouTube, Netflix, HBO Go, Tunein Radio, Hulu and more. The Xbox has Skype, Internet Explorer (haha), Netflix, Comedy Central, Twitch, and heaps more on its platform. And it looks like it’s not going to stop there — more apps will probably be available on both platforms in the near future.

Should Sony be afraid?

This year, Microsoft dropped a huge surprise at the E3 2015, announcing that their Xbox One console would be backward compatible for Xbox 360 games, and that “We won’t charge you to play the games you already own”. This was a jab at Sony perhaps, who charges users who wish to rent games from its PlayStation Now service (although you get free games monthly if you sign up). Still, with all the new tech developments and upgrades, how long will you have before you decide to box up your old Xbox 360?

Phil Spencer, Head of Xbox, only emphasised how much effort Microsoft was putting into their gaming arm when he said at the recent Gamescon 2015, “Gaming will be a critical component of the success of Windows. I really believe that.”

And Microsoft has indeed shown what it can do, by allowing its latest Windows 10 upgrade to stream your Xbox gameplay to any Windows device, and vice versa. Its DirectX 12 gaming technology also boosts the amount of work that can be sent to the graphics card — and gets it done in less time. It also allows your GPU to run multiple tasks at once, so you save rendering time, reduce latency, and get more frames per second.

TL;DR you’ll have better graphics, a faster dashboard, and the possibility of displaying content in 4K resolution. Very cool.

Let’s not forget the future of gaming with the advent of Augmented Reality (AR) and Virtual Reality (VR). VR was a big topic at this year’s E3, with Oculus showing off their latest Rift headset and Sony revealing a multiplayer shooter demo for Project Morpheus. And then there’s Microsoft’s HoloLens, an AR headset which is set to provide some tabletop AR gaming on Windows 10 and Xbox One.

Microsoft already did a demo of Minecraft with the HoloLens at E3, which fascinated everyone on the floor. When you consider Microsoft’s deal to support the Oculus Rift VR on Windows 10 and the development of the HoloLens headset, you can see why they’re well ahead of Sony in all realms of realities.

“Most people don’t have an inherent understanding of how to create in 3D — it can be very complicated on 2D screens,” said Microsoft’s corporate vice-president Kudo Tsunoda, in an interview with The Guardian. “This is one of the places that HoloLens and gaming come together in a very interesting way — allowing a lot more user-generated content, not only as part of the gameplay but also involving players in the creation of the game and how the gameplay evolves. I think we’re going to see more communities adding to and customising the games they play.”

With the tech already available in the market or in final stages, we’re pretty sure we’ll be seeing games tailored for this platform in the near future.

What can we expect in the next next-Gen of gaming?

Some pretty crazy shit, we hope. We’re already seeing some outstanding stuff from all platforms: Sony with the games, and Microsoft making a comeback after its epic E3 blunder two years ago. While Sony has taken all the accolades in the console war pretty much since the beginning (and are still ahead in sales), Microsoft’s major announcements in the past months (and weeks) are enough to keep them on par, if not slightly ahead of Sony.

As Spencer explained in an interview with Eurogamer, “I think it’s about growing Xbox. Sony’s had great success with the PlayStation, they’ve earned that success over multiple decades of building a great product. We’re growing Xbox year on year, we’re bigger than we were this time in the 360 generation, so generation over generation we’re in a better spot, year over year we’re in a better spot. We’re seeing more people online, more games being sold, more consoles being sold. So generally I feel good about the trajectory we’re on.”

But let’s take a step back. This ‘who is better’ dilemma between the consoles will never end, but that’s okay. In fact, gaming has gotten a whole lot more exciting now than it’s been in a long time. Because no matter how intense the competition gets between these two, the true winners are really the gamers.