Debby Soo, VP APAC Of KAYAK, On Their Plans For S’pore & Why They’re Better Than Google Flights 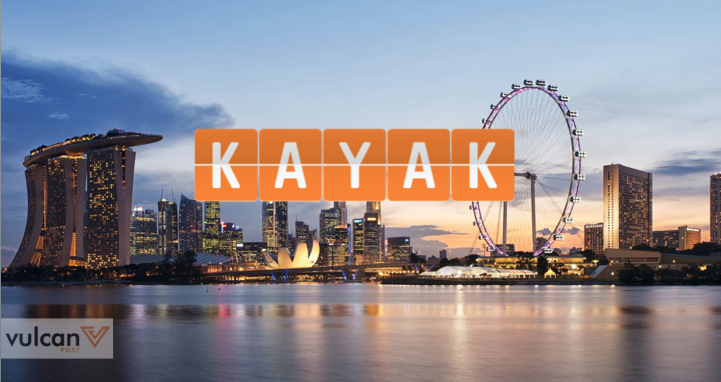 It’s a fact: Singaporeans love to travel. And as a tech-savvy nation with one of the highest smartphone penetration rates in the world, it’s not hard to imagine that Singaporeans love using tech to enhance their travel experiences. One such website, KAYAK, recognised this potential.

The American-born service, which is dedicated to providing travellers with all the data they need to make the best, most informed decisions, officially launched in Singapore in April as part of an APAC expansion, and are set to be the giant of travel tech in Asia.

Vulcan Post had a chance to talk to Debby Soo, the Vice President of APAC for KAYAK, during her trip to Singapore. Based in San Francisco, she’s a frequent traveller herself, and wears her KAYAK badge proudly. They say to act as you preach, and Debby was quick to share that she had used KAYAK to make last minute bookings for this trip, making her hotel reservations in Singapore just as she was boarding her flight. She’s also a big advocate of shamelessly asking for upgrades, having upgraded her normal hotel room in Conrad Singapore to the Centennial Suite at 3am in the morning. Talk about efficiency.

“I call all my markets my children — Singapore is one of my favourite children.”

While KAYAK was unwilling to share statistics about their growth in Singapore since they snuck into Singapore a full year before their official launch, Debby reassures me that Singapore is “one of (her) favourite children”, referring to the many markets that she oversees in APAC.

“It’s growing; the traffic, even from a month to month basis, is growing significantly. Every month, I’m getting more users than the previous month. We know that Singaporeans love to travel. It’s a great market for us in that way. We know that people who come to our site from Singapore have a very high conversion rate. So when they are on our site, they will very likely purchase something from our partners. It’s been one of the best markets we’ve had in Asia, especially for how small this country is, but it’s been one of our top performing markets.”

iPhone users have money to burn

So what does KAYAK have in store for one of their “favourite children”? So far, it seems that KAYAK has made great efforts to research on the travel behaviours and search trends of Singaporeans, and the results are looking good. These results, which are included in a Mobile Travel Report, reveals Singapore’s search and spending patterns online when it comes to travel.

Surprisingly, smartphone users are more likely to do searches within an app (74%) than on a web browser, which is great news for KAYAK, whose mobile app has been downloaded 40 million times in over 120 countries.

“Consumers here are so tech-savvy, so mobile savvy, our product is made for someone in Singapore. It really fits the needs of the people in this market,” said Soo.

Singaporean iPhone users also spend 37% more on expensive destinations than Android users, compared to a difference of 2% in Australia.

Another interesting finding from the report is that there seems to be a correlation between Apple users and travel. According to the report, a whopping 44% of Singaporean mobile searches are done from an iPhone. iPhone users also tend to spend more with each trip, with more iPhone users booking business flights than web or Android users. Singaporean iPhone users also spend 37% more on expensive destinations than Android users, a significantly larger gap than Australian and Hong Kong mobile users, who spend 2% and 16% more on iPhone respectively.

That said, most people still prefer making their purchases on desktop, spending 12% more than when they’re on mobile. Big ticket items, such as long-haul flight tickets, are more often booked on desktop. But Soo predicts an inflection point soon, especially with the high mobile penetration rates in Asia being significantly higher than in the US, where KAYAK’s headquarters are based.

“(APAC) is a region that we’re very committed to. KAYAK’s philosophy on growing markets…we want to grow, but we want to grow in a responsible and smart way. So we are not going to throw millions of dollars into a market until we think our product is ready.”

Soo also shared that they will be rolling out the results of much of their local efforts in the digital space within the year.

“It takes a long time to build a website, but now I think we are ready. We know that the people who come into our site are transacting, purchasing, people who come once come back, and all of those metrics are where they need to be, so we’re in a really really good place here. I’d say the key markets that we will be focusing our efforts on are Singapore, Hong Kong, Australia.”

[Editor’s Note: The subheader above and a quote in this section has been amended.]

While KAYAK has had great success in the US and Europe, they’re also entering a crowded space here in Asia. Identifying services like Skyscanner, Wego, and TripAdvisor as their main competitors in the region, they recognise the stiff competition ahead, even with partners like Expedia and Zuji that are also offering booking services.

But with Google amping up their travel searches, cutting into the travel metasearch field that KAYAK and Trivago have been dominating, will specific services like Skyscanner or Expedia really be that much of a threat?

When asked, Soo acknowledges that the multimillion technology company is one growing competitor that they have to keep a close eye on. Google, after all, is crazy fast, and they have the popularity of Google search on their hands. But their strength may also be their shortcoming, and that’s where KAYAK’s opportunity comes in.

“We watch them very very closely, especially in the US. With their acquisition of ITA they have great US domestic content. Their site is very fast, it’s instantaneous. We’re always trying to work on speed, it’s one of the core tenets of who we are and what our product is about.

“The thing about Google and why they are so fast is the shortcoming of that product, for example, is that they’re maybe not searching as many data sources as we are. We are going out and calling hundreds of data sources. When you hit search we’re calling hundreds — OTAs, GDSs, Airline directs, everyone, to be comprehensive — we want to show you everything. I don’t think Google’s reached that point yet, especially for an international product offering, they’re not there yet.”

Since its IPO and acquisition by The Priceline Group in 2013, KAYAK has been going full steam ahead with their plans for world domination. It is currently available in 20 languages and more than 30 local markets, and if our conversation with Debby is anything to go on, they have no plans on stopping. With Singaporeans making over 8.05 million trips a year (according to NATAS statistics from 2013), it’s no wonder that services like KAYAK have their eye on this little country.

Perhaps it’s time for Singaporeans to lay off the Google search and try something new.

KAYAK is available on web, iOS, and Android.

Also Read
2 Sisters Started A Blogshop As Teens, Now They’ve Made It To NY. This Is Their Story
Categories: Traveller, Entrepreneur, Singaporean, Editor's Picks