This Netizen Points Out Something Disturbing That People Have Forgotten About Dr. Mahathir 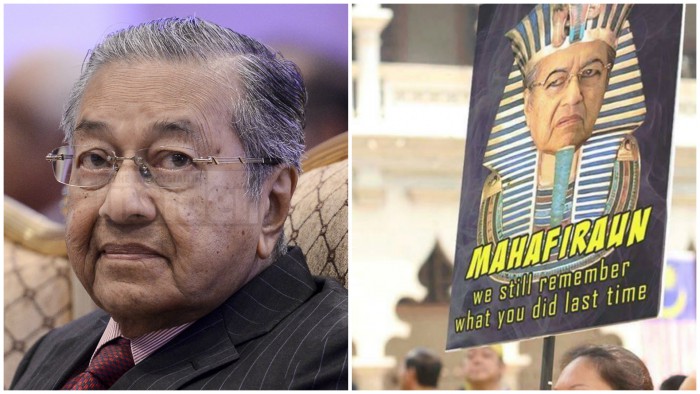 Former Prime Minister Tun Dr Mahathir made news headlines online and offline when he was seen attending the Bersih 4.0 rally last weekend along with his wife Dr Siti Hasmah. The couple was swarmed by numbers of Bersih participants, all trying to shake hands and take selfies with one of the greatest politicians of our country.

Media personnel immediately rushed to the his side, just to get some words from the famous Dr. Mahathir himself. His speech was met with a rousing applause and cheers of “Hidup Tun”.

While others sing his praises, a Facebook user who goes by the name of Rama Ramnathan has shared an interesting photo of the Bersih rally, in regards to Dr. Mahathir. According to him, the picture was re-shared by Tricia Yeoh on Facebook. However, instead of a typical placard with drawings that make fun of PM Najib, it had graphics of Dr. Mahathir being portrayed as a Great Pharaoh of Ancient Egypt.

A pharaoh is a symbol for dictatorship, or autocracy, so the creator of the sign obviously doesn’t think much highly of the ex-PM. Rama said that the image was his “favourite picture from Bersih 4” and reminded netizens about what people seem to have forgotten about Dr. Mahathir’s 22 years of ruling over Malaysia.

1. PAS once predicted that he would be a dictator, and they were right.

When he assumed office, PAS, Malaysia’s Islamic Party, dubbed him mahafiraun and prophesied that he would rapidly lose his position.

2. Mahathir was in charge of UMNO for 22 years which changed Malaysia for the worst.

Mahathir led the Malay party, Umno and stayed in office for 22 years.

3. PM Najib learnt his tricks and tactics from Dr. Mahathir.

Mahathir’s tactics were mastered by the present Prime Minister, Najib.

4. The root cause of the current political crises is Dr. Mahathir himself.

Najib is enjoying the fruits of Mahathir’s labour.

5. Dr. Mahathir’s intention of attending Bersih is personal (he wants PM Najib to step down), it is not for the people to have institutional reform.

Mahathir blatantly said during his visit to BERSIH 4 that he doesn’t support Bersih’s calls for institutional reform. Why would he, since he instituted them?

Mahathir just wants to replace a crook he doesn’t favour with another whom he does favour. He doesn’t want to reform the systems and institutions which allows every Prime Minister to turn into a crook.