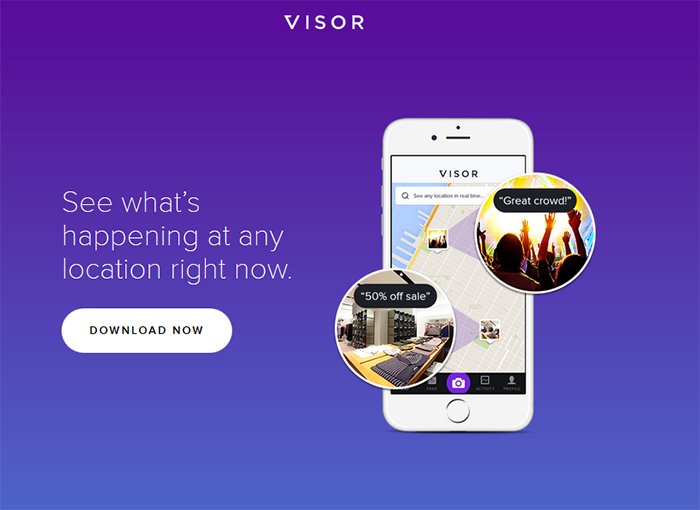 The glorious weekend is almost within reach and most people are already making plans with their loved ones on the places they’d like to visit during their precious off days. However, just the thought of stepping foot outside our comfy little cocoon of a bed in order to be stuck in a crawl towards the parking lot of our favourite mall, is already way more than we bargained for.

The creatively-envisioned Visor app plans to tackle that conundrum for you. It may have been released early last year, but has only recently gained popularity and was one of the apps recommended under the newer ones available in the play store.

Visor’s concept of “See Anywhere Now” is intriguing and the thought of discovering how crowded an area really is before you even step foot outside your door sounds like a pleasant one.

CEO of Visor, Jason White founded the app so people can help others through crowdsourcing and the usage of geolocation. The free app available on both Apple and Google play stores runs by the simple concept of requesting for an image to be taken of a certain location.

Those who are within the vicinity of the area will snap images of where they are currently at, in order to notify other users whether it is currently busy/crowded or otherwise. The categories available on the app are “Food and Restaurants”, “Bars and Nightlife”, “Shopping”, “Cake and Bakery”, and “Museum and Art”.

Users requesting for real-time images can then tell whether they should head to their desired location, based on the image they have received. The recent update on the app also allows for rewards on monetary terms, so you can get paid whilst helping others save time as well.

Besides asking whether a place is crowded, other queries include, “Are there any parking spots available?” or “Show me a picture of the current sales”, and all these will certainly come in handy for people who are always on the go.

The interface of the app is fairly simple and is divided into four tabs, which are map, feed, activity and profile. The first tab allows for users to search places by typing in the desired location.

I decided to test the app out and searched two locations to be on the safe side, and they were the Boat Noodle Restaurant in the Empire Damansara mall, as well as the Coffee Cottage café located in SS15, Subang Jaya.

Hence, the waiting game begun. The app allows users a time frame of one hour for others to respond to the query presented. I asked the question, “Is the place busy?”, but as I was new to the app, I did not have any friends to answer my query and was depending on strangers.

Users of the app may also invite their Facebook or phonebook contacts to join the app so they can share images of their current locations with one another.

The wait felt much longer than I had anticipated and even as the hour was up, I was disappointed as I did not receive any responses for both my locations. Not only that, as the app utilises GPS, it does consume the phone battery at a fast rate, so keeping it on for the entire sixty minutes drained my phone’s life rather quickly.

Feeling slightly dismayed, I decided to scroll through my feed, soon realising that the updates of locations were mostly from New York, where the app is born. By searching the “Where we operate” function under my profile page, I am now informed that even at the rate by which Visor is being adopted by users worldwide, it is currently only operating from locations in the United States, as well as Toronto, Canada.

The app is mostly active in these areas and as such, will naturally garner better and quicker responses from the said locations. Now, unless you have other contacts who are also utilising this app, Visor could potentially be not of much use at all.

Whilst it is a great idea in theory, it is not utilised enough by Malaysian users for it to become a functional app to download. Visor users have the option of sharing their query onto social media sites such as Facebook as well, but would it not be the same for us to type up a status update instead?

All in all, the app is a great concept but unless you’re on a vacation to the States, you would likely find it pointless. Hence, until more of our friends start adopting the Visor app, it would not be an app of choice for searching up locations in real-time. I guess we might have to battle through the expected jam and crowd just like everyone else, after all.

You can download the Visor app from the Google Play Store or the Apple App Store.