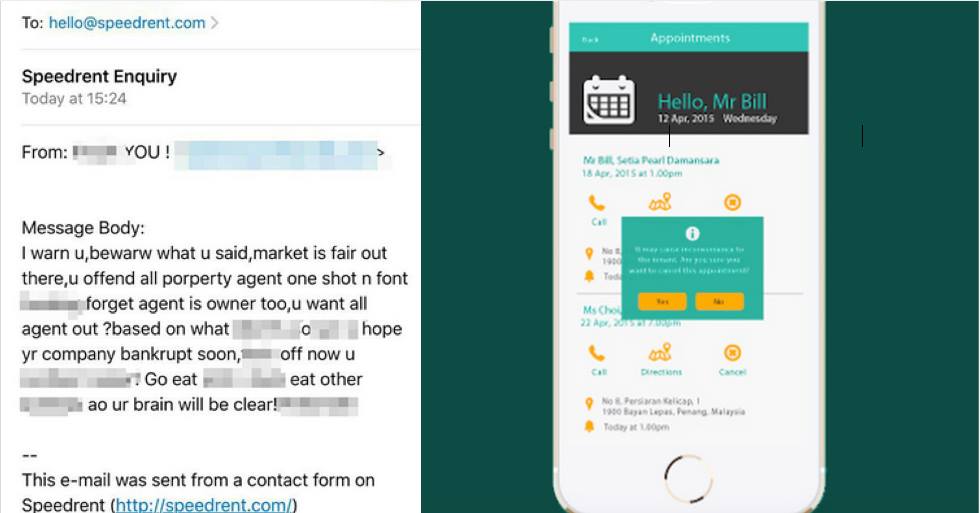 Property agents have always played an important role in facilitating property-based transactions. They’re the middlemen that bridged the gap between property owners, tenants and interested buyers. While we can’t deny their influence, we have to admit that times are indeed changing.

We have many new platforms that are looking to disrupt the industry by making their role obsolete, one such platform is Speedrent.

Speedrent is an app that allows interested landlords to rent out their properties to potential tenants without the help of property agents. Landlords that are weary of going through the hassle of interacting with property agents can take matters into their own hands and perform such transactions right through the app. What’s more, they get to pocket the commission that they’d otherwise have to pay out to the agent.

In an earlier interview, Wong Whei Meng (founder) mentioned his own experience with property agents as a landlord and he felt that they were only playing the role of a messenger and nothing more. He said, “Dealing with 3 agents would require me to repeat the same thing 3 times. In an app, you just need to state it one time, and it can be replicated many, many times.”

The Effects Of Disruption

Over the past 3 months, 659 tenants dealt with owners through Speedrent, and some members of the industry is beginning to feel its impact. While 659 may not be a ridiculously huge number, it does show that there are a significant portion of people that would rather deal with the landlords directly rather than going through a property agent.

There could be a list of reasons as to why people prefer platforms and apps, rather than dealing with property agents. For starters, searching for houses on platforms is much easier, cheaper and often quicker.

While competition is great for any industry as it drives innovation and gives the customer more choice, it’s definitely not good for individuals that are resistant to change and innovation.

In fact, a few property agents got in touch with Speedrent and here’s what they had to say in really bad English.

So, how valid are their arguments?

I feel that statements that are often said about a certain group of people, be they positive or negative, tend to generalise the entire population based on a particular trait and it doesn’t give the audience sufficient time to realise that there are exceptions to the rule, especially in today’s day and age.

So if I say that a particular group is extremely intellectual or rude, and I constantly market it to my audience, I’m being unjust by not giving them enough time to decide for themselves. This however, doesn’t apply to people that shun that entire particular group because of one or two poor personal experiences.

Speedrent alludes to the fact that property agents are incompetent and unnecessary. Although based on the previous article, Wong does concede that there are good property agents that don’t need to be threatened by the app. However, he also iterates that they don’t make the majority of the population.

While this is his personal view, it’s not expressed in detail through their marketing campaigns. For example, Speedrent’s tagline, “Find Property Owners, Not Agents”, although catchy, puts all agents (even though they’re good ones out there) in the same negative light without highlighting the existing of the ones that are competent.

In this case, I can empathise (kind of) with the negative and unpleasant backlash.

Co-Existence, Not (Yet) Replacement

On the other hand, although circumstances are getting tougher for all property agents because of platforms like Speedrent, I find that the act of blaming and threatening your competition is counterproductive, there are other civil ways to respond. And if airing your thoughts and opinions is your last resort, then it’s always recommended that you do so in a tasteful and rational manner.

If such platforms are able to garner traction in the market today, then it’s pretty obvious that there’s a need for it. In such cases, I feel that the best thing property agents can do is to welcome healthy competition and to adapt to the changes by improving themselves and the services that they offer.

At this point of time, I don’t think such platforms are capable enough to completely replace property agents like how the personal computer replaced the typewriter. The market is big enough for both to co-exist and to benefit off each other.

There are people who like the idea of taking matters into their own hands, especially when it comes to renting out their properties through such platforms; and there are also people who are busy enough to outsource their work to property agents who can find them the right buyers or tenants.

And if the idea of co-existence doesn’t please such property agents, they should also know that they still have the upper hand in certain ways—they understand and have more experience with mortgages, legal requirements, market conditions, and preparing the necessary paperwork (contracts, leases, deeds, etc.)—which other startups don’t (not yet anyway).

At the end of the day, the most wanted man will win based on the clients’ needs.