Students Can Crowdfund Expensive School Fees Thanks To This Brilliant Startup 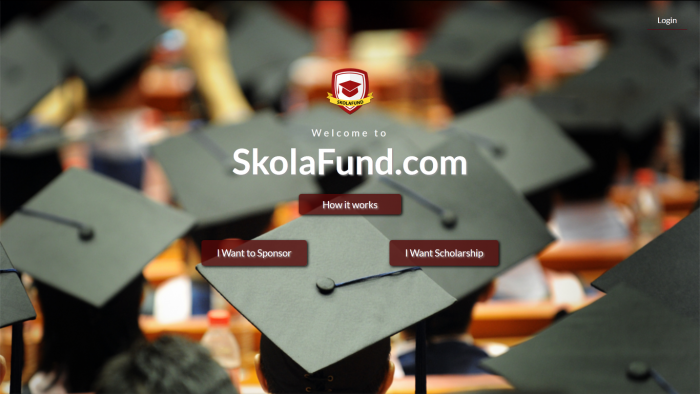 Every parent planning to have children will know that paying for tertiary education will become a mind-boggling matter someday. Regardless of what path of study their child winds up choosing, it is going to cost an exorbitant amount. Of course, this would tend to affect those from families with lesser incomes, but dreams to succeed should never be measured against how rich or poor one’s familial background is.

As the famous saying goes, “What if the cure for cancer is trapped inside the mind of someone who can’t afford an education?” If everyone is given a fair chance for education, there could be a vastly different outcome not only for our nation, but possibly the world someday. As such, a startup came up with the idea to fund students who may not be able to support their own education fees.

Mechanisms Of A Student-Funding Campaign

Skolafund is a web portal where students can run crowdfunding campaigns to fund their own education. Students would organise their own 30-day campaign on the platform with a target funding amount, and funds contributed to unsuccessful campaigns (those that don’t meet their target within the timeframe) will be returned directly to the sponsors. The startup will do their part by emailing their own user base and approaching their contacts to gather support for the students. Skolafund will also promote the students’ campaigns via their Facebook and Twitter portals.

Tengku Syamil, co-founder of Skolafund said, “These posts usually go viral with the community’s support. We would also guide the students on how they can use email and levy on their peers’ social media to spread the word about their campaign.”

The sponsors are usually generous members of the community who only desire to receive updates on the students in return, as well as find out how they are doing in school and life. According to Syamil, these sponsors view Skolafund as a platform where they can identify and help students in need.

“Culturally, the Malaysian community is very giving. In 2014, Malaysia is ranked as the 7th most giving country in the World’s Giving Index. I personally think it’s about building and gaining trust from the community towards our platform,” said Syamil.

Skolafund does not set any limit for the amount of funding a student wishes to set for their campaign. However, they also make it clear that the bigger the target, the tougher it will be to meet it.

Inception Of A Noble Idea

Together they managed to gain the interest of Startup Bootcamp, MaGIC and Maybank by presenting themselves as a scalable startup trying to solve the problem of education financing. As a result, they also gained a pre-seed grant from Startupbootcamp.

To date, Skolafund has launched 14 scholarship campaigns — 8 of which were successful, 3 unsuccessful, and 3 currently on-going. When a campaign fails, Skolafund will try to get foundations, businesses and other organisations to help the student out in any way possible.

Syamil said: “One of the unsuccessful campaigners on our previous website (…) we managed to match him with an interest-free loan from an organization.”

Trust Is A Big Word

Skolafund does find it challenging at times to convince sponsors, especially when it’s their first time coming across the platform.

“They would normally ask a lot of questions about the students and our platform to ensure it’s legitimate. We always try our best to answer their questions quickly,” said Syamil. “Once convinced, they normally would pledge to the students they are inclined to.”

However, trust is something that Skolafund has been able to build for their startup and they do so by gaining the support of influencers and celebrities.

“Dato’ Fazley Yakob and Imran Ajmain, has given us a lot of support in getting the word out about Skolafund to their followers,” said Syamil. “Getting retweets and mentions by influencers like Anwar Hadi and English Jer also helps us establish social media presence and this helps as well.”

Apart from that, they try to work with established organisations like MaGIC and Maybank to build credibility with their users.

Building Educated Citizens Of The Future

Moving ahead, Skolafund shares that they will look into other alternatives that they can also provide students to help finance their university education.

“One new feature that we are working to introduce on Skolafund is “Create Scholarship”. This feature will enable anyone or any company to start their own named-scholarship. They can decide on the amount, criteria of the students they wish to award it to and set requirements and conditions for it on our platform,” said Syamil.

In the end, Skolafund’s ultimate mission is to make higher education affordable and accessible to all those who qualify. They believe that no one should be deprived of quality education just because they cannot afford it.

As he puts it: “The problem is real and the opportunity is big.” If that is true, Skolafund has much to leverage on in further establishing their startup.

To sponsor a campaign or learn more about Skolafund, click here.