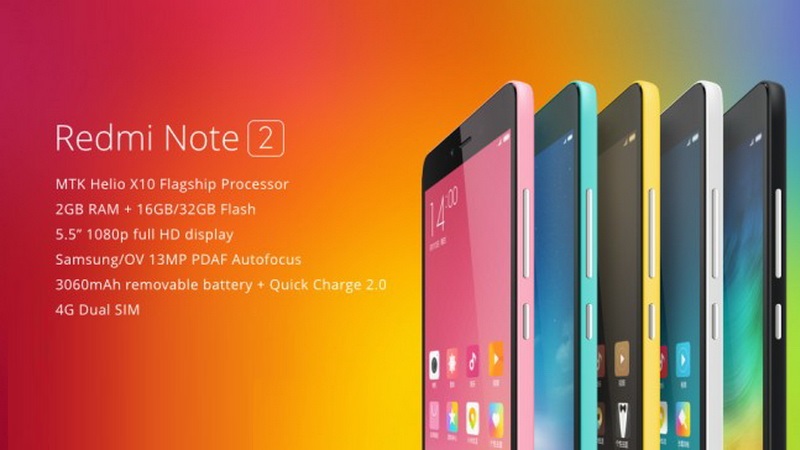 Founded in 2010, Chinese phone manufacturer Xiaomi rose to popularity among the non-iOS smartphones by using a customised version of Google’s software, hence the Xiaomi phones are much affordable compared to other phones in the market, without compromising its phone quality.

Just today Xiaomi has rolled out their latest smartphone in Asia—Redmi Note 2. For those who are still on the fence about purchasing the phone, here is a list of the top 5 reasons to get your hands on Xiaomi’s newest and possible greatest phone yet.

The phone comes with different colour options, including white, dark gray, pink, yellow, and blue. Besides the variety of options, you can also customise your rear cover because the cover can be removed.

The colour variety for the Redmi series stems from the desire to design it for the youths who are colourful, vibrant, and young at heart. The Redmi Note has been proven to be a popular choice among youths, with 25 million sets sold since its launch.

Redmi Note 2 is an outstanding choice who those who are heavy mobile phone users. This is because the phone battery is 3060mAh, thus its very high capacity allows it to have a standby time of up to 12 hours.

In the past few years we have seen more and more companies produce phones which are made out of aluminium and has non removable batteries. As for Redmi Note 2, the phone has a removable battery which allows you to have extra batteries to get through the day.

The 13-megapixel camera on Redmi Note is top notch. The phone allows you to take gorgeous photos which can be compared to the iPhone 6 plus.

Apart from that, the camera also features a phase-detect auto focus (PDAF) which is a type of technology typically found in DSLR cameras. This feature enables the phone to focus on an image in 0.1s which means it’s able to grab the shot you want much faster. For selfie lovers, the 5-megapixel camera with f/2.0 aperture is all you need.

The phone comes with a vivid 5.5-inch, fill HD display, providing superb and high quality viewing angles. Therefore the phone display is extraordinarily stunning. In addition, Xiaomi also added a new new feature called Sunlight Display which dynamically adjusts the screen for a crystal-clear image, even under sunny sunshine. This sort of quality is not something you would expect from a phone which costs less than RM1,000.

Speaking of price, Redmi Note 2 is certainly affordable, set at a retail price of only RM649. We wouldn’t say it’s the greatest phone available on the market, but with its specs and quality, a phablet-like screen, and fantastic camera, you have got a device which is probably already worth more than the price.

At the launch today, Hugo Barra, the vice president of Xiaomi Global, shared that the Redmi Note isn’t exactly a flagship phone, unlike the Mi Note, Mi Note Pro and Mi 4i. However, the smartphone was “born to perform” and was designed for flagship performance, which is a first for Xiaomi, according to him. “What we’re able to achieve with Redmi Note 2 from a performance perspective is well beyond our wildest dreams,” he shared, which was how the tagline “Born To Perform” was created for the smartphone.

Redmi Note will be available for pre-order on November 11 and the phone will be shipped in 14 days.