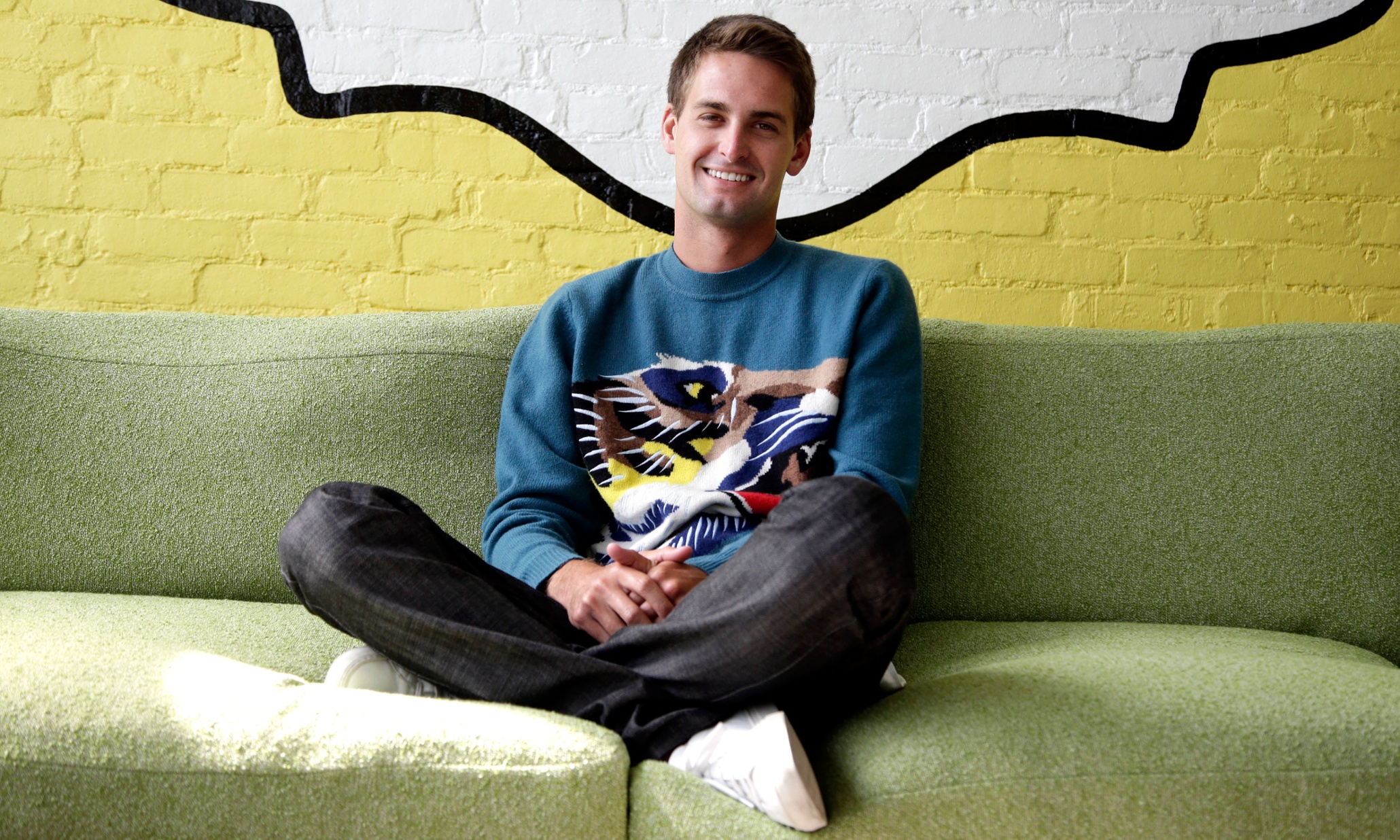 If Silicon Valley had a bad boy icon, it would be Evan Spiegel. The CEO and co-founder of Snapchat shot to the limelight when the app became wildly popular, with 100 million daily users and reportedly 6 billion video views per day. To top it off, he has a reputation of loving the party life and his popularity with the ladies has cemented his place as the tech company director that everyone wants to talk about. At 25, he’s also the world’s youngest billionaire.

Here are the top 8 lessons you can learn from Evan Spiegel.

1. It’s not about the degree, it’s about the experience

It’s probably well known that Evan Spiegel has joined some of the tech greats in the college dropout club. Just short of 3 classes to graduate from Stanford University, he took off when Snapchat began to grow and decided to focus his efforts on the business.

He did go through a graduation ceremony, as he revealed in a speech he gave at the USC Marshall Undergraduate Commencement Ceremony in 2015, but it was a “fake” graduation where the folder handed to him on stage was empty — an alternative Stanford allows students using the summer term to complete their degrees.

“So I sat in the hot sun and listened to Cory Booker speak for what felt like quite a while, and I waved to my family who had travelled all the way to watch me not graduate,” he said.

While Spiegel didn’t complete his degree, he’s no slacker. He’s taken several classes that helped bolster his skills in product design, including a class at the Arts Center College of Design in Pasadena, and two continuing-education courses at the Otis College of Art and Design in Los Angeles. In Stanford, he majored in product design. His co-founders, Bobby Murphy and Reggie Brown, were also fellow fraternity brothers, and it was in his dorm that Brown complained to Spiegel about a photograph he regretted sending.

The rest, it seemed, was history.

2. When mistakes are uncovered, apologise for them as quickly as you can

While one of the richest men under 30, Spiegel has quite the reputation. This was aggravated when a series of leaked emails written by Spiegel began to circulate, showing a side of him that was sexist, racist, and homophobic.

The emails leaked by ValleyWag were sent during his frat days, and included a slew of misogynistic jokes, anecdotes about drunkenly urinating on drunk girls, and brags about incidents including marijuana and cocaine-based drugs. In response, Spiegel has issued an apology expressing his remorse for the emails. “I’m sorry I wrote them at the time and I was [a] jerk to have written them. They in no way reflect who I am today or my views towards women.”

In the USC Marshall Undergraduate Commencement Ceremony in 2015, Spiegel may have made a reference to the emails, saying, “You are going to make a lot of mistakes. I’ve already made a ton of them — some of them very publicly — and it will feel terrible, but it will be okay. Just apologize as quickly as you can and pray for forgiveness.”

You can’t undo mistakes you’ve made, but you can always apologise and hope for the best. Spiegel’s reputation may not have completely recovered from the incident, but if he’s still being invited to make speeches at Commencement Ceremonies and Conferences, you can be sure it’s not that bad.

3. Mistakes can become the best opportunities — learn to spot them

In starting a company, it’s important to recognise when opportunities arise. And if Spiegel’s experience with building Snapchat is anything to go by, mistakes can sometimes lead to some of the best changes.

The inspiration behind Snapchat, for instance, began with a mistake, albeit one made by co-founder Reggie Brown: he’d stepped into Spiegel’s room to discuss a photo he wished he didn’t send to someone. The exact phrasing of what went down that night has been highly debated in legal disputes surrounding the ownership of Snapchat, but according to a Forbes article, Brown said something along the lines of “I wish there was an app to send disappearing photos.”

The next formative step for the app was when it received a cease-and-desist letter from a photo-book company with the same name. While this would have staggered most startups, this came at a time when Picaboo was struggling, and this letter forced their hand to begin rebranding. What could have been a big ‘oops’ moment became what Spiegel called “the biggest blessing ever”.

4. If at first you don’t succeed, try and try again

As an entrepreneur, you can’t be deterred by the idea of failure. Spiegel’s first business came in the form of Future Freshman in 2010. The site, which was designed to help high schoolers deal with the stressful college admissions process, never took off. According to Spiegel, “We got, like, maybe five people on the service.”

His next venture was the idea of “disappearing photos”, but the first version of the app was far from the hit that Snapchat is now. Named Picaboo, the app was launched in 2011 and fell short of expectations — it only had 127 users by the end of the summer. Venture capitalists that they pitched to also had lukewarm reactions to it.

When there’s a great idea and a well-performing app, it attracts the attention of many investors. One such investor was Facebook, who offered US$3 billion in cash to acquire Snapchat. Despite the large and very attractive number, Spiegel turned down the money, opting to grow the company on his own terms.

In the Commencement speech he made, Spiegel shares that one of the most common questions he’s been asked is why he never sold his company. Exiting is common practice in Silicon Valley, and with large payouts like the one offered by Facebook, it’s hard to imagine turning instant billionaire status down. But according to Spiegel, if you know you have something valuable, you should stick to it — exiting isn’t the real end goal.

“I am now convinced that the fastest way to figure out if you are doing something truly important to you is to have someone offer you a bunch of money to part with it,” he said. “The best thing is that no matter whether or not you sell, you will learn something very valuable about yourself. If you sell, you will know immediately that it wasn’t the right dream anyways. And if you don’t sell you’re probably onto something.”

It doesn’t matter anyway. At their latest round of fundraising, the tech company was valued at $16 billion.

Thinking back to everything that he’s accomplished, it’s tough to remember that Spiegel was born in 1990. That means that the first prototype of Snapchat launched when he was merely 21, and Snapchat became wildly successful just a year later. He joined the Forbes 400 at age 25, coming in at No. 327, and became the world’s youngest billionaire.

What were you doing at age 25?

Spiegel has all the makings of a real nerd. According to a Forbes article, he jokes that his best friend was the computer teacher, and that he built his first computer in sixth grade (age 11-12). But if you still believe in the classic movie stereotype of nerds always being neck-deep in work and never being able to get the ladies, think again. The age of technology has made it so that tech CEOs are some of the coolest and most pursued guys around, and Spiegel is no exception. He is currently dating ex-Victoria’s Secret model Miranda Kerr, and is known for being a fan of partying.

He also came from a very wealthy background, and notably had the set designer of the TV show Friends, Greg Grande, design his house. This includes a home movie theatre, Venetian plastering, and floating bookshelves.

Interestingly, Speigel has been called the “most stylish tech CEO” and the “Kanye West of Silicon Valley”, having been featured in magazines for his fashion style and even appearing on the cover of Vogue.

While we’ve crooned about Spiegel’s accomplishments, we need to also recognise that he came from a place of privilege. Born to two successful attorneys, Spiegel is used to living a life of luxury. In a Forbes article, it was revealed that he often had fights with his father about his extravagant spending habits, once guilt-tripping him into buying him a new BMW.

And if you’re in a position of privilege, you should own up to it. Spiegel has not been shy to admit that he’s been extremely lucky in his career, and attributes it to working the system.