Live Gigs To The Voice Of China: Ipoh Lad Gu Zhen Bang On Doing Whatever It Takes 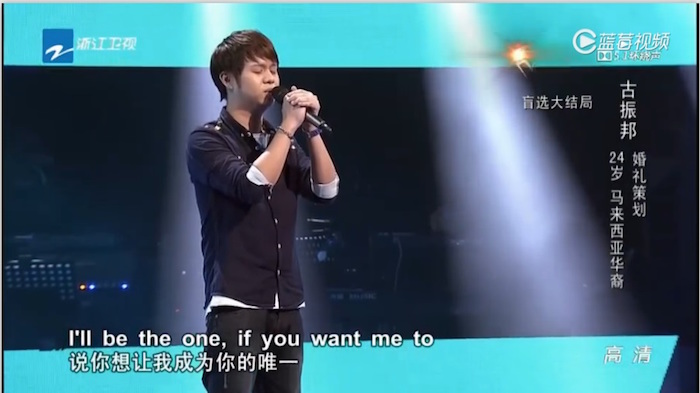 When we talk about career aspirations, it is unusual for us to think of a career in the music industry when we were younger. However, that’s not the case for Ipoh-based Gu Zhen Bang.

Most of you might be unfamiliar with the name, but for those following The Voice of China, the name might ring a bell—Gu Zhen Bang is one of a handful of singers from Malaysia, who have come into the spotlight on the popular reality TV Show.

“I wouldn’t know what I will do if I’m not a singer, and the road wasn’t an easy one,” Gu Zhen Bang told Vulcan Post before his performance at Live Stage Singapore earlier last week.

“I thought of giving up when I was 12 years old,” Gu Zhen Bang recalled.

Doing Whatever It Takes

Growing up in Ipoh, Gu Zhen Bang didn’t have the opportunity to pursue a formal training in music, and despite that, he soon found himself to perform in front of an audience, with small gigs in bars and restaurants. While he enjoys what he is doing, music gigs couldn’t put food onto the table, and he soon dabbled into doing his own business—a bar at downtown Ipoh.

“I tried to run a business, and I also tried cooking, so that I can earn enough money to continue singing. However, things didn’t turn out that well with the business, and I went back to singing. That was a really bad year (2014) for me.”

Gu Zhen Bang later managed to get one of his demos sent to the producers from Voice of China, all thanks to his supportive girlfriend, and was invited to sing at the recording studio in Kuala Lumpur. It was after the performance that the producer extended a formal invitation to Gu Zhen Bang to participate in the auditions for the fourth season of The Voice of China. The audition would later be the one event that kickstarts his music career.

The Music Industry Is A Competitive Space

Shuffling between Beijing, Shanghai and Malaysia now, Gu Zhen Bang is currently working on his first single, expected to be out in December. Next year, he will also be launching his own personal album.

When asked what he felt of the music industry in both Singapore and Malaysia, Gu Zhan Bang said that it is competitive, and that you really need to know that you want a career in this industry.

“There’s so many talented people out there, so you really need to believe that you have the skills and you are willing to put in the painful effort and extra hours.”

“One good thing about music, when it hits you, you feel no pain.”

LiveStage Presents Mini Concert Series by Voice of China contestants (hear the music, feel the pulse, and touch the soul).
Every week on Thursdays, Fridays and Saturdays, 8.00 to 11.30pm.